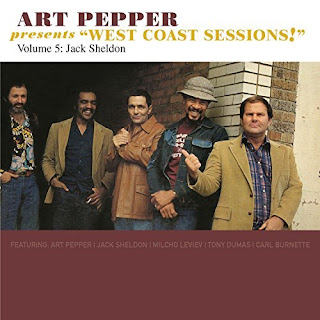 When I became a big fan of Art Pepper’s work, it was through listening to recordings from late in the saxophonist’s career and life. The three volumes of Neon Art really impressed me. And now the fifth volume of West Coast Sessions! gives us another excellent taste of his later period. There is something about those last few years, when he made that comeback, that is exciting and loose and moving and free. And during this time, Art Pepper played with several different musicians. In part, that was because he had to, as a way of sidestepping the restrictions of his contract. As far as the record label was concerned, Art Pepper was a sideman in these recordings. West Coast Sessions! Volume 5: Jack Sheldon was originally released as Angel Wings by Jack Sheldon And His West Coast Friends, and features Jack Sheldon on trumpet, with Milcho Leviev on piano, Tony Dumas on bass and Carl Burnett on drums. This expanded re-issue includes four bonus tracks, including one that was previously unreleased. It also includes new liner notes by Laurie Pepper.

The album opens with an original tune, “Angel Wings,” written by Art Pepper and originally used as the title track for this album. It has a light, brisk, cheerful feel, and makes me smile almost immediately. Hey, we can all use that these days, right? And I love that bass line. Art Pepper and Jack Sheldon also recorded this one a couple of decades earlier, and it was included on the 1957 LP The Return Of Art Pepper. “Angel Wings” is followed by “Softly As In A Morning Sunrise,” which eases in but soon develops its own fun rhythm. Both Art Pepper and Jack Sheldon deliver some wonderful stuff here, and I particularly like those moments when they’re working together. Seriously, there is some glorious work here, and while listening to this album, my worries about the sad state of the country fade away. And, hey, it’s a catchy tune, originally written for the 1928 musical The New Moon.

Art Pepper turns romantic with “You’d Be So Nice To Come Home To.” Not that this track is mushy or slow; in fact, after its moving opening section, it has something of a swinging rhythm and a cheerful, happy vibe that I really appreciate. Ah, Cole Porter sure could write them, eh? And this particular recording of this particular tune is making me think of a particular girl in a particular city far from my city, and how it would be so nice to come home to her. But rather than making me sad about the situation, this track is filling me with optimism and joy. I love Milcho Leviev’s work on piano in the second half of the tune. Absolutely wonderful! “You’d Be So Nice To Come Home To” is a song that Art Pepper also recorded back in the fifties, including it on 1957’s Art Pepper Meets The Rhythm Section. And the bonus tracks include an alternate take of this tune, originally included in the Art Pepper box set The Hollywood All-Star Sessions, released in 2001. This take is a bit shorter, but still features some fantastic playing. The main difference is that this take does not include the return to the opening part at the end.

“You’d Be So Nice To Come Home To” is followed by an original composition by Jack Sheldon and Art Pepper, “Jack’s Blues.” What a fun ride this one is, cooking along at times as if with no cares, but just the love of the trip, keeping things kind of light and fluid. With that title, you’d expect some great playing by Jack Sheldon, and you’ll get it, no question. But everyone gets a chance to shine here, and there is a section of just bass and drums, with Tony Dumas and Carl Burnett responding to each other, a playful bit of give and take, before the horns return to finish things up in a bright, joyful way. The horns then begin the next track, “Broadway,” working together, dancing together like a duet in a musical on the Broadway of the composition’s title. This is another composition that Art Pepper and Jack Sheldon had tackled before, including it on The Return Of Art Pepper. I really dig that drum solo. The bonus tracks include an alternate take of “Broadway.”

There is a moment near the beginning of the beautiful and moving “Historia De Un Amor” that I completely love. It’s a brief, little interaction between piano and saxophone, but something about it is so bloody wonderful and true. I’ve listened to it a dozen times now, and I can’t quite put my finger on what it is. You’ll have to check it out for yourself. And then Art Pepper’s lead is stunning in its emotional depth, with Jack Sheldon’s playing equally moving. This is an incredible track. The bonus tracks include a different version of “Historia De Un Amor,” with Jack Sheldon providing vocals. It is the only vocal track on this release, and is also the only previously unreleased track. It’s a gorgeous rendition, with Sheldon delivering a passionate vocal performance. Art Pepper’s playing is at least as passionate, making this a seriously good rendition. I’m surprised it was left unreleased until now. The only thing that detracts from its beauty at all is that brief shouting toward the end, which feels out of place.

The original album concludes with another Art Pepper composition, “Minority,” which Art and Jack had recorded together earlier for The Return Of Art Pepper. The version here is a couple of minutes longer than that earlier version and features a great lead on bass, with just some touches on piano and drums. There is also a short drum solo right before the end. There is something really fun about this track. The bonus tracks include an alternate take of this tune. At the beginning, we learn that it’s the first take, and you can hear the song being counted off.