Laura Benitez And The Heartache: “With All Its Thorns” (2018) CD Review 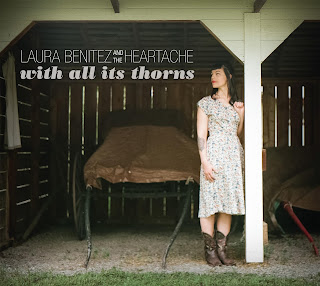 Time is flying by (although it does seem like Donald Trump has been occupying the White House for 144 years), and it’s been more than three years since Laura Benitez And The Heartache released Heartless Women, an excellent country album. Now they are following that up with With All Its Thorns, featuring all original music, written or co-written by Laura Benitez. As on the previous release, Bob Spector plays guitar, and Ian Sutton is on pedal steel. Joining the group this time are Mike Anderson on bass, Steve Pearson on drums, Billy Wilson on accordion, Steve Kallai on fiddle, and Jim Goodkind on backing vocals. This group is based in Berkeley, California, and performs mostly in Northern California. But these musicians have classic country sounds running through their veins, though without a fear of mixing in other elements.

The album opens with “Something Better Than A Broken Heart,” in which Laura Benitez laments the end of a relationship that should have been the one, singing “I always thought I’d get that diamond ring/Always thought we’d take that trip to Spain.” But it is not a depressing-sounding song. The accordion is what really makes this song for me; it has a happy sound, a bit of Cajun party vibe added to this country tune. Something you can dance to. Yes, it’s always best to dance away our troubles, our disappointments, maybe even our longings. “Something Better Than A Broken Heart” was written by Laura Benitez and Doug Tieman, and it one of my personal favorites. It is  followed by “Easier Things To Do,” a gentle, sweet country tune, with some really nice work on pedal steel. “Might have been easier things to do/Than love you/But I do, but I do.” I love the truth and experience in Laura Benitez’s voice. There is more good work on pedal steel on “Our Remember Whens,” another love song, this one with a lighter vibe. Check out these lines: “Looking back is something I look forward to/’Cause I can’t wait for our remember whens.” Nice, right? Yes, this song makes me want to kiss and squeeze that special someone.

“In Red” has a more serious tone. There is something of a haunted, doomed sound to the approach of this story and character, which is kind of delightful and perfect, particularly as the song is largely about a wine stain on a wedding dress, and how that was a portent of the marriage to come. This is another of my personal favorites. I love that guitar part in the second half of the track. “Why did I wear white to our wedding/I should have married you in red.” That’s followed by “Whiskey Makes Me Love You,” which has my favorite song title of the album. “I love you when you’re sleeping, darling/I love you when you open those blue eyes/I even love you when you’re mad and when you’re keeping score/But whiskey makes me love you more.”

“Ghostship” is another of this album’s highlights. Right away I love the violin, the way it sounds both sorrowful and hopeful over that simple strumming on guitar, setting the mood. This song features probably my favorite vocal performance of the album as well. This is a wonderful, gorgeous and moving song, about the fire in a warehouse in Oakland in which thirty-six people died. “Why Does It Matter” is an unusual, pretty, gentle tune with the feel of a waltz. It is yet another favorite, and features another striking and moving vocal performance by Laura Benitez. “It doesn’t matter how much you would take with you if you walked away/I’d still have what I need and more if I didn’t have us/But if it doesn’t matter, than why does it matter so much?” I love this song. The album then concludes with “Nora Went Down The Mountain,” which begins with the line “On a cold and sunny day in January,” which seems timely. Not for us here in Los Angeles, of course, but for those elsewhere in the country. This song has a cheerful vibe, and some nice work on violin. “Someone heard she went to New York City/Someone said she’d been seen in Paris, France/The only thing that anyone could ever say for sure/Is Nora went down the mountain and she never came back.”

CD Track List
With All Its Thorns is scheduled to be released on January 26, 2018 on Copperhead Records.
Posted by Michael Doherty at 3:54 PM