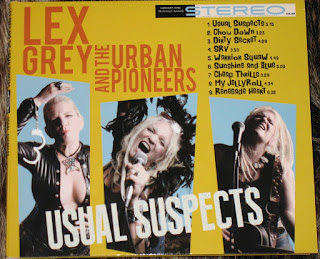 After Heal My Soul, the 2016 release from Lex Grey And The Urban Pioneers, I was completely smitten and under this band’s spell. That was in large part because of Lex Grey’s voice, which is a force all its own, bursting in and controlling any space it wants to occupy. But the band is damn good as well, and Heal My Soul ended up as one of my favorite releases of 2016. And so my expectations could not have been higher for their new release, Usual Suspects. This album features all original material, written or co-written by Lex Grey, and, as I assumed, it’s excellent. It’s blues, rock, country, and it may be just exactly what you need to get you through the day, because, let’s face it, things are totally screwed up out there and we rely on music and these tough souls to carry us through.

The album opens with its title track, “Usual Suspects,” which starts by setting up a very cool vibe and rhythm. Lex Grey And The Urban Pioneers are adept at creating an intriguing landscape, populated by characters, by themselves, and perhaps by those of us listening as well. Lex’s vocals are delivered with restraint at first, so she has a place to go, to build to. And, indeed, this song goes in some interesting and unexpected directions, and it pulls me right along. The way the song just drops out for a moment after the line “You’ve got it all wrong” adds weight to the line, gives us a moment to consider it, the line feeling like it’s directed at us. And for just a moment, we worry that that’s what we’ll be left with. But after that, that cool rhythm returns, and there are nice touches by Walter Tates Jr. on saxophone. “Wasn’t about the sorrow/I like the comradery/Same time tomorrow/Definitely.”

The band then moves to a fun, light rock and roll tune about eating, “Chow Down,” with Lex Grey singing “I don’t want to fool around/I just want to chow down with you.” Okay, it’s nice to be reminded that things aren’t all dour and dire. Here is a song that tells us to forget our troubles, have a drink and enjoy a good meal. And it includes accordion, so there you go. That’s Brian Dewan on accordion (and on piano). That’s followed by one of my favorites, “Dirty Secret.” This one has a classic and delicious blues and soul base, giving it a timeless quality. Then her voice just tears into you, completely owning the space – glorious and sexy and fantastic. And she does some surprising things with her voice. Just listen to the way she delivers the first line, “Why don’t you tell everybody the way you told me,” particularly the way she sings the words “the way you told me.” Wonderful. And she sounds almost delicate on the word “anymore” in the line “I’m not your dirty secret anymore,” which obviously comes as a surprise. But even her vulnerable quality comes across as strength, as she tells us “I’m moving on, I’m moving on, I’ve got to be strong/I’ve got to find somebody who loves me, who loves me, who loves me.” “Dirty Little Secret” was written by Lex Grey and Kaia Updike (Kaia also plays bass and piano on this track).

Another of my favorites is “Sunshine And Blue.” This one has a great vibe right from the start, with that sexy work on trumpet. I’m completely sold even before Lex Grey’s vocals come in. And when she begins singing, she delivers a simple and sincere declaration of love: “I love you/Sunshine and blue/My heart is true/My heart is you/Sunshine and blue/You’re my dream come true/And when I’m with you/There is nothing I can’t do.” From there, the song goes up a level and Lex Grey’s vocals come on stronger. I love how she tackles this one, but it’s Chris Pasin’s work on trumpet that really makes this track something special. “Sunshine And Blue” was written by Lex Grey and Vic Deyglio. That’s followed by a fun country tune about being in a band and being on the road. “I met an ex-con with an accordion/His soul was on parole/We had cheap thrills/In fleabag hotels/Prescription pills/And a whole lot of running from the law.” Oh, they make it sound like a blast. Plus, this one features Kaia Updike on violin, Kenny Siegal on lap steel and Brian Dewan on accordion. I love this song more and more as it goes on. “I said temptation’s coming to get me.”

Usual Suspects ends with another highlight, “Renegade Heart,” which might actually be the album’s best track. The instrumental section, that combination of horns and ukulele delights me in a way I can hardly begin to describe. And of course Lex Grey gives us another excellent vocal performance. Check out these lines: “The sky outside looks like your eyes/Except the parts the clouds disguise/That’s the reason for my lies.” But when she sings “Take my blues away,” I have to object. Sorry, but we need you to have the blues, Lex Grey, so that you can help take the blues away from the rest of us. We need you, especially now. Not until the country claws its way out of its current abyss, tearing through the rotted flesh of Donald Trump and Mike Pence, should you even consider stepping away from the blues. “It’s the last hope/The last tear/The last minute that I’m spending here/It’s the last time/The last place/The last words, baby, that I’ll ever, ever, ever say.”

CD Track List
Usual Suspects is scheduled to be released on January 22, 2018.
Posted by Michael Doherty at 3:01 PM