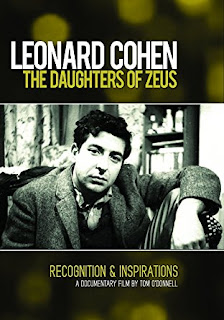 That being said, the rest of this review is about Leonard Cohen’s Lonesome Heroes, which was released in 2010. The film is about the influences on Leonard Cohen’s work, and features interviews with music journalists and biographers (though no interviews with Leonard Cohen himself). At the beginning, there is a bit of biographical information on Leonard Cohen. Cohen biographer Stephen Scobie talks about Leonard Cohen’s early poetry and its relation to his music: “There is the same care for language, the compulsive revision that goes into so many of his songs, that meticulous craftsmanship which he brings to songwriting.” But this film is largely about those people who influenced him and played a part in the development of his craft, with sections on Federico Garcia Lorca, Irving Layton, the Beat poets, Bob Dylan and Judy Collins.

While there are no interviews with Leonard Cohen, there is footage of him in concert, performing “Hey, That’s No Way To Say Goodbye,” “Take This Waltz,” and “Tower Of Song,” as well as talking about Federico Garcia Lorca. There is also some footage of those who influenced him, including Allen Ginsberg reading from Howl, Jack Kerouac reading from On The Road, and Bob Dylan performing “Mr. Tambourine Man.” The best section is that with Judy Collins, in large part because the film actually includes an interview with Collins. She talks about meeting Leonard Cohen and hearing him sing his first few songs, and about his first performance. There is one very weird choice, however. As we hear a bit of Judy Collins’ excellent rendition of “Dress Rehearsal Rag,” what we’re shown on screen is a doctored image of part of the suicide scene from The Rules Of Attraction.

The film also explores the influence of country music on Leonard Cohen’s work, as well as the spiritual element to his life and music. The film is narrated by Thomas Arnold.

There are also brief written biographies of the folks interviewed for the documentary.

Leonard Cohen: The Daughters Of Zeus was released on June 9, 2015, but was originally released as Leonard Cohen’s Lonesome Heroes on October 19, 2010.
Posted by Michael Doherty at 12:41 PM