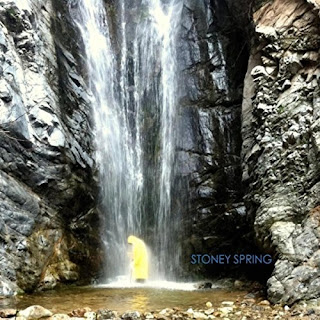 Stoney Spring continues to impress and delight me with the band’s third release, The Natural Sweetness Of Cream (following 2013’s Right On Heliotrope! and 2015’s Don’t Let Me Die At Coco’s). One I thing I love about this band is its fearlessness in exploring different avenues, musically, thematically, philosophically – and, yes, humorously. There seem to be no preconceived notions of the path a song must take, but rather each song has its own peculiar journey, and these guys allow the music and themselves the freedom to see it through. How bloody refreshing is that? There is a great sense of play here, particularly with language, with words, but that doesn’t mean these tracks lack depth. Check out these lines from “Chasing An Abstract Dream”: “Oh, the things people do to each other/While chasing an abstract dream/Oh, the things I do to myself/While chasing an abstract dream.” Plus, Rob Waller’s is one of my favorite voices in music. He and Anthony Lacques share lead vocal duties on this CD. As on the previous two albums, all tracks here were written or co-written by Anthony Lacques, who also plays the majority of the instruments – piano, drums, guitar, electric bass and marimba. Paul Lacques is on dobro and lap steel, and Jimi Hawes is on upright bass. This release also features as guest musicians some members of The Brendan Eder Ensemble (Christine Tavolacci on flute, Henry Solomon on alto saxophone, Amber Joy Wyman on bassoon, and Rhiana Caterisano on clarinet), with Brendan Eder writing and conducting the woodwind arrangements.

The album opens with “I Think I Am A Rasta,” which has a sweet, cool folk rock sound. With many of its lines beginning with the words “I believe,” the first time I listened to this disc it made me think of the Buzzcocks’ “I Believe,” but of course sounds absolutely nothing like that song. Lines like “I believe that my mind is my science, and my science is philosophy” and “I believe this heat we feel, this heat we feel, this heat is how life began.” It’s like through stating his beliefs, he’s trying to get a handle on life and some of the greater questions, testing out how these beliefs sound, see if they’re right. After all, the title is “I Think I Am A Rasta,” not “I Am A Rasta.” There is a shift a little more than halfway through the song, with the music gaining in power. That song is followed by “Kindersound,” which is intriguing from the start, grabbing us immediately with its burst of an opening, and then going in some surprising directions before starting to rock. This one requires some volume.

Certain lines from “Revisiting The Past” really stood out for me the first time I listened to this CD, lines like “And if life is suffering, then I know for certain that I’m far from dead” and “For a guy like me, protection from tyranny means a lot/Thanks for the freeway and the parking lot/Safe from crime, more or less.”  This too goes in unexpected directions. Like I mentioned, I love that this band allows each song to exist on its own terms, in its own world, with its own structure, and this song certainly follows its own path. There is even a moment of surprising and honest laughter, and I like that it was left in. “If you can’t be righteous, be kind/If you can’t be kind, be still/If you can’t be still, be useful/If you can’t be useful, be peaceful/If you can’t be peaceful, be sane/If you can’t be sane, be righteous.”

Based on the opening sounds of “Life In The Western States,” the first time I listened to this disc I had certain expectations, certain ideas of what this song would be. But I’m a fool because this album has already made a habit of defying expectations. Sure, the theme is “western,” sort of, but the first lines are “The western states don’t know how to play football/That’s what they want you to think/The western states don’t know how to play baseball/That’s what they want you to say.” (Last night the Dodgers won the National League pennant, by the way.) “Life In The Western States” was written by Anthony Lacques and Paul Lacques. “Western States Part II” is another intriguing track, also delivered as spoken word, with both an intimate one-on-one feel and a sense that he’s speaking to anyone who might be listening, like he’s been directed to deliver thoughts on our current reality into a microphone. “And today, well, the skies are as big as ever/But it feels as if my feet are no longer on the ground/And I don’t know if anyone’s feet are really on the ground anymore/So we just stare upward, waiting for something to come down and grab us/Embrace us, perhaps, shake us out of our torpor, stupor.” There is a frightening science fiction aspect to it. I imagine him in a white room from which there may be no exit. Or perhaps I’m projecting; I should go for a walk.

“Music Is Like Exercise For Words” is a wonderful song, with something of a tribal vibe at moments. “Words sit around, withered on the vine/And I don’t even know if they’re yours or they’re mine.”  I appreciate the lines about dicking “around all day on Facebook.” I’ve been toying with the idea of getting away from that site, and such a move certainly has its appeal. Language and communication are so important to me, and it seems that online chatter somehow erases the power of words and brings every topic down to one dull level (and, yes, I’m fully aware that I’m posting this online). People are reaching out more and more, and saying less and less. “Destroy your temples and your pimples and all your fucking problems/Music is like exercise for words.”

“Class Of ‘72” is a very cool instrumental that has a loose, early 1970s feel, as its title might suggest, with some delightful work on keys. In a way, I’m a member of the class of ’72, as that’s the year I was born. Is that part of the reason I dig this tune so much? Could be, but let’s not worry about that. “Rhodes Scholar Figures It Out,” also an instrumental track, has my favorite title of the album. Both of these instrumental tunes make me feel pretty damn good. This CD concludes with another good instrumental track, “Black Vernissage” which has a wonderful jazzy vibe featuring the work of the members of The Brendan Eder Ensemble.