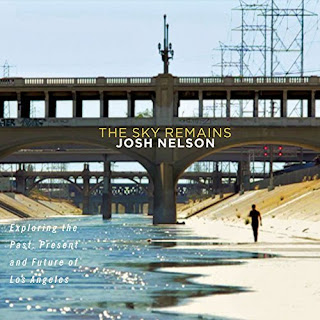 I've been residing in Los Angeles for approximately two decades, and there are things I've come to really love about this city. Certain places, certain buildings, even certain roads. There really is a special feel to this city, which when looked at in a certain light can be almost magical. Fellow Los Angeles resident Josh Nelson explores different areas of the city on his new album, The Sky Remains. He is interested in capturing and conveying the varied history of the city in these pieces, and does a remarkable job. And his love for the city comes through clearly. Most of the tracks here were written or co-written by Josh Nelson, but he does include a couple of interesting covers. Joining Josh Nelson on this CD are Anthony Wilson on guitar, Josh Johnson on alto saxophone and flute, Chris Lawrence on trumpet and flugelhorn, Brian Walsh on clarinet, Larry Goldings on organ, Alex Boneham on bass, Dan Schnelle on drums and Aaron Serfaty on percussion. Also, vocalists Kathleen Grace and Lillian Sengpiehl perform on certain tracks.

Josh Nelson begins the album with a thoughtful, interesting piece titled "Bridges And Tunnels." His piano part that opens the song has such a pretty, delicate fairy tale-like quality. Adding to that feel is the vocal work of Kathleen Grace and Lillian Sengpiehl. Vocals, but no lyrics. Yet this track also has a grounded quality. I hate being on the bridges in Los Angeles, particularly during heavy traffic, because it seems one of the worst possible places to be caught during an earthquake. Josh Nelson seems to have no such fears, at least as expressed in this piece, which has touches of beauty, touches of majesty. That's followed by the title track, "The Sky Remains," a mellow, pretty track, featuring vocals by Kathleen Grace, who also co-wrote the tune. "What is a story/A picture in a frame/The city's different now/But the sky remains the same." Los Angeles has changed quite a bit in the time I've lived here, even just in my neighborhood. L.A. changes, though certain things seem to remain constant. This song is about the observatory in Griffith Park, and about the man whose violent attack on his wife let to its construction. And the song's main line is about how something lasting, something good can come out of a short, horrible moment.

Joshua Johnson wrote "On The Sidewalk," which has a different feel, particularly as it is driven mainly by the horn rather than piano. It takes its inspiration from writer and activist Charlotta Bass, and from the California Eagle, the newspaper she published in Los Angeles in the first half of the twentieth century, and it has some of the excitement and even the tension of those times. Alex Boneham adds some cool touches on bass. That's followed by one of my favorite tracks, "The Architect." This one too features some good work on bass by Alex Boneham (including a lead section), as well as some delicious work on drums by Dan Schnelle. And of course, there is plenty of great playing by Josh Nelson on piano.

"Ah, Los Angeles" features Lillian Sengpiehl on vocals. It's an interesting tune, as it has a rather lonely sound, and yet builds to become oddly inspiring. "I love you so much/You bitter town/I love you so much/You dark blossom in the sand." Then "Lost Souls Of Saturn" is playful and fun, opening with some cool percussion. This is one of the album's two covers, written by Russ Garcia and originally recorded for the 1959 album Fantastica: Music From Outer Space. This track makes it feel like a fantastic city in motion, old romantic gumshoes who moonlight as dancers rising from the shadows into the ether, followed by a loose, chaotic parade of characters. Yes, it feels like an entire history is being told, and all the musicians really contribute and shine here, cutting loose, making this one of the disc's highlights. "Lost Souls Of Saturn" is followed by the album's other cover, "Pitseleh," this one written by Elliott Smith. Kathleen Grace provides the vocals. There is something pretty about this track, particularly some of Josh Nelson's work on piano.

"Pacific Ocean Park" is another of my personal favorites. It begins with the distant sounds of an amusement park, with a disturbing hint of darkness over it. Josh Nelson's piano then leads us into the main body of the song, which has an old-time flavor.  My girlfriend said at one point it sounded to her like a New Orleans funeral. The tune rises to these boisterous, almost jubilant heights, and then ends quietly, thoughtfully, gently. That's followed by "Run," another of the tracks to feature vocals. This is probably my favorite of the tracks with lyrics. "Run, run/When you're lost and alone in the world on your own/Run, run/'Cause you don't need this kind of welcome back home." Kathleen Grace co-wrote this one. It has something of a 1970s mellow pop sound. And I love that sad, lonely horn. The album then concludes with "Stairways." This one too feels like it's all about motion, and according to the liner notes the song takes its inspiration from the many staircases of the Los Angeles hillsides. I don't think I've ever seen most of them. Is that possible? There is so much of L.A. I've yet to explore. I feel like this CD has introduced me to parts of Los Angeles I didn't know about.

CD Track List
Bridges And Tunnels was released on September 15, 2017 on Origin Records.
Posted by Michael Doherty at 9:59 PM