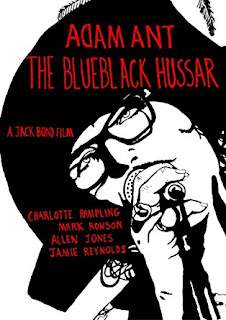 There is a bit of narration at the beginning of The Blueblack Hussar about how in the 1980s Adam Ant was at the height of his fame. So true. Adam And The Ants had several hits in the UK, and then when Adam started his solo career he began having success in the US as well. “But then tragedy struck, and after a nervous breakdown, he found himself sectioned under the Mental Health Act, locked up and forcibly sedated, putting him in a state of artistic oblivion,” the narrator tells us. “This is the story of his brave return from exile,” the narrator promises.

Except it’s not, at least not exactly. The movie hardly mentions his breakdown or mental health again, and doesn’t really show us Adam Ant’s struggles. And the narration completely disappears. That’s not to say that The Blueblack Hussar isn’t interesting. But it is certainly not the film it promises to be. It basically has the feel of home movies rather than a documentary. People on screen are never identified. So either it’s assumed we know who all these people are, or it doesn’t matter who they are. The camera basically follows Adam Ant around, and sometimes he speaks directly to the camera, as at the beginning when he tells us that the blueblack hussar is the follow-up to his famous white stripe across his face, but more often he’s speaking to those around him, but for the benefit of the camera and the film’s audience as well. On the way to a gig, he pulls out the night’s set list. “It’s a long one.” Indeed, it is. He also says the two places he’s happiest are on stage and in bed, and I wish someone were there to ask him further about this, to explore the reasons why he’s not as happy when he’s not performing, one way or another.

There are a lot of ordinary details captured in this movie. We see Adam Ant applying makeup, posing for photos, getting a tattoo, and so on. And there is some weird footage of him dancing in his home and some woman trying to follow his steps and gestures for some reason. It’s really bizarre. Why is she doing this? Who is she? I really wish those on screen were identified. Likewise, the locations. There is some seriously enjoyable concert footage, but the venues and dates of the shows are largely left unmentioned. He sings, “I want to make my intentions very clear/I want to fuck you in the ass/I want to fuck you on the floor.” And I like the footage of him performing “Press Darlings,” a cool punk tune.

Interestingly, before you know it, you’re sort of immersed in his world, like you’re one of the odd characters surrounding him. Was that the intention behind not identifying people, to make us feel like we must already know them? Though there are no proper interviews done specifically for the film, there is footage of Adam Ant being interviewed on the radio, and footage of him being interviewed by someone else in a house. That’s actually in some ways more interesting, because we are detached from the process a bit, looking on as someone else struggles to set up and work the camera while Adam waits – something that the filmmaker of this documentary could very well have had to deal with had he chosen to go the normal route with this film. There is even a dog that gets in the way.

The film includes footage of him meeting Charlotte Rampling. Apparently, Adam is a big fan of the film The Night Porter (hell, so am I), and wants her to perform one of his songs. He jokes about doing a “world tour of London,” causing Charlotte to laugh. I also like the footage of him in a recording studio, singing “Ca Plane Pour Moi.” And wow, check out his backing vocalist’s amazing fuzzy sweater. And I love the footage of him with artist Allen Jones. It seems this film is often at its most interesting – and Adam is at his most interesting – when he is with someone he respects, and the focus is shared. Perhaps it is then we see a bit more of who he really is.

Though the film doesn’t get into any of his troubles, or even the reasons for his returning to music (other than he’s happiest when on stage), there is something of a progression shown. From small gigs to a show at Hyde Park before a large crowd, which concludes the film, showing that he is clearly back in the spotlight.

The DVD includes some bonus footage, more concert footage. Interestingly, this footage is clearly identified. The first bit is a snippet (approximately two minutes) from a show Adam Ant did at The Scala in London on November 21, 2010. The sound isn’t great. The second is from Jazz Café on March 31, 2011, and this footage features Adam singing “Young Parisians” with Boy George. It is approximately three and a half minutes, and is totally delightful. The third is from The Electric Ballroom on December 16, 2010, with Adam Ant performing “Deutscher Girls.” Very cool.

The special features also include a Q&A with Jack Bond and John Robb recorded at Riverside Studios on June 24, 2013. Jack Bond talks about meeting Adam Ant for the first time. “When I met him, I was kind of entranced by him.” And that led to him deciding to make the film. He talks about the style of filmmaking used in this documentary. He says: “I think it does create its own narrative. But finding that narrative and eliminating what you don’t want is the hardest part. I think that is the struggle.” This is approximately fourteen minutes, and includes snippets from the film he made with Salvador Dali. Jack Bond does compare Dali and Adam Ant.

The Blueblack Hussar was directed by Jack Bond, and was released on DVD on October 16, 2015.
Posted by Michael Doherty at 5:57 PM