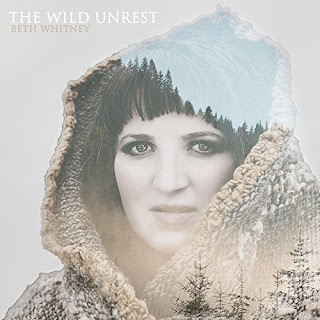 Certain albums seem to come at the exact point when we are in need of them. So it is with Beth Whitney’s new release, The Wild Unrest. Feeling a bit lost and lonely (as I suppose we all do at times these days), I put this disc on, and Beth’s voice joined me in the darkness, the perfect company to lift my spirits. You might be familiar with Beth Whitney through her work with The Banner Days, the band she has with Bradford Loomis, or through her earlier solo releases, but for me this album served as an introduction to her talent. Joining Beth Whitney on The Wild Unrest are Aaron Fishburn on upright bass and percussion, Natalie Mai Hall on cello, Jonathan Berry on violin and backing vocals, and Brandon Bee on – well – a whole lot of different instruments including mountain dulcimer, guitar, banjo and piano. Brandon Bee also produced the album. On backing vocals are Ellen Whitney, Carina Lewis, Sarah Gerritsen and Kate Lynne Logan. All tracks on this CD were written by Beth Whitney (though one is based on a poem by Linda Pastan).

The Wild Unrest opens with “Raven,” a song that kind of sneaks up on you. It begins somewhat quietly, and before you know it, you’re pulled in by the beauty of the vocals, by the subtle but effective percussion, by the strings. It becomes a rather gorgeous song, and it provides the album with its title in the lines, “See her body flying over/With a song of wild unrest.” It’s followed by “Shadows Of A Man,” which has something of a haunting tone. “The war has not been won, he said/The dying’s just begun.” This one builds in power at moments, with both the percussion and the strings gripping us.

Then “Tumwater” has a beautiful folk sound. This is exactly the kind of song that first drew me to folk music when I was in my teens in the late 1980s. Its tone, the sound of her voice, the way she delivers the lyrics all work on me the way the music did then, when everything was fresh and I was eager to learn from each song I encountered. Wonderful that music can still affect me that way. “I thought that I’d do better than this/I thought that I’d be better than this.” And the strings are perfect. “Tumwater” is one of my favorite tracks, and it’s followed by another favorite, “Tides Are For Sirens,” which starts with a gentle, comforting sound, something we need right about now. “Which heartbeat is yours and which one is mine/Am I the water, the mist or the sky/Your sorrow’s heavy here mingled with mine/And it’s lighter that way.” And suddenly there is a playful, sweet, joyful vocal section that builds and had me nearly in tears. I love how a song can move us like that. Beth returns to that section at the end of the song. I am completely in love with this song, one of my favorites of the year. “So tell me your story, and I’ll tell you mine/It’s lighter that way.” If you’re feeling lonely in the night, let Beth reach out to you through this music. The next song, “Morning Star,” also has a friendly, comforting feel. “Don’t fall, don’t fall, please don’t fall,” she sings, but it feels like this song itself is capable of catching us and lifting us. (Apparently, this song was originally titled “Don’t Fall.”)

While Beth Whitney doesn’t belt out her lyrics, there is a definite strength behind her voice, and that strength comes through in her being open to pain as well as joy. “Days Of Nights” is a moving and engaging song, told by the haunted voice of a woman who has endured much, but has by the end perhaps come through. “He said don’t fight it/He said it’s too late/He said I’m just like the others/As he gave me away/To that red light/Where my days are made of nights/And he said won’t nobody love you like this.” The CD then concludes with “Fireflies,” which is Linda Pastan’s poem set to music, with certain lines repeated. This song is beautiful and uplifting, leaving us in a good place.

CD Track List
The Wild Unrest is scheduled to be released on November 11, 2017.
Posted by Michael Doherty at 11:27 PM