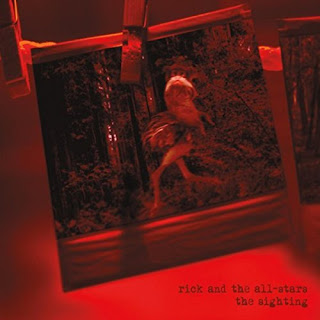 There is a certain number that seems to come up every single day for me. That number is 37. It is my birthday: 3/7 (and I was born during the reign of the country’s 37th president). It is the number of plays that Shakespeare wrote (unless you count The Two Noble Kinsmen, which I don’t). It is the height in feet of the Green Monster at Fenway. It is the number of dicks that Dante’s girlfriend sucked in Clerks. In Monty Python And The Holy Grail, the man that Arthur called old says, “I’m 37.” There is an episode of The Simpsons where Homer tells Marge to guess a number between 1 and 50, and she immediately guesses 37 (leading Homer to say “D’oh!”). The other day at work, a truck drove past the set with “37” in large black letters on the side, and no other writing. No idea what that was about. Anyway, it comes up every day. When I began reading the liner notes for The Sighting, the latest release from Rick And The All-Stars, the first thing I saw was “Day #37, 7 am.” The number is mentioned two more times in the liner notes, liner notes which incorporate the titles of the CD’s tracks into a log entry. I bring this up because it could be important. Like Richard Dreyfuss says in Close Encounters Of The Third Kind, “This means something.”

Anyway, The Sighting is the second release by Rick And The All-Stars, following 2015’s The Invisible Session. Like that previous album, this one was recorded in a single day (on July 8, 2016, not the year’s 37th day, in case you’re wondering). It was recorded live at the Invisible Sound recording studio, with only two overdubs added. Rick And The All-Stars consists of Rick Pressler on guitar, John Shock on keys, Hoppy Hopkins on drums, Dan Naiman on saxophone, and Paul Margolis on bass and guitar. (You might also know Shock, Hopkins, Naiman and Margolis as The Stone Hill All-Stars.)

The album opens with “Her Most Recent Missive,” a seriously cool, slow bluesy dark jazz number. Dan Naiman’s saxophone is the strong voice of the piece, calling out to us from a concrete corner, a place from where hope is perhaps retreating. But the keyboard and guitar march in, providing light, but maybe also announcing danger. And then, bam, we’re led straight into a joyous number that caught me off guard. In this one, titled “Como Altar Kuchu,” the horn sounds so happy, and seems to want to make you happy too. And why not? I totally dig the rhythm created by Hoppy Hopkins on drums and Paul Margolis on bass. Plus, there is some cool stuff on keys and guitar. This is a tune certain to get you smiling, tapping your toes, and we can all use tunes like that these days.

The band then goes into a funky, hip number called “The Sighting,” the album’s title track, one of my personal favorites. I imagine some against-the-rules detective following some suspicious individual into a parallel universe where prime numbers dress in flashes of light and the air has drug-like qualities and mirrors pay your bar tab. This tune develops into a cool jam, with all the musicians grooving and shining. That’s followed by “Mrs. Bianchi,” which begins as a mellower bluesy number, then halfway through picks up a groovy rhythm, those brushes playing across the snare. There is some wonderful work on guitar here.

“Camp Ephilus” is another of my favorites. It begins with just saxophone, then takes on a sort of strong, tribal rhythm. At a certain point, the guitar and keys remind me a bit of Phish, a kind of electronic, insistent rhythm, but the percussion continues that raw, delicious thing it’s got going on, and the saxophone is coming from a tough smoky old jazz club. It all adds up to something fantastic, a track I enjoy more each time I listen to this disc. And then it gets quieter, maybe sneaky, and you wonder what this track is up to, and suddenly it’s over. Then a New Orleans kind of rhythm starts the next track, “I Am No Captain.” When the other musicians come in, the tune moves far from any relation to that city, and creates its own strange landscape. I love the way the instruments all work together here, having reached some agreement, then begin having their own things to add. I particularly like the guitar on this track. And check out Hoppy Hopkins’ work on drums toward the end. Then there is something a bit funky about “Physical Evidence,” and you get the feeling it wants to break out into more chaotic territory, but is restrained in some way. The CD then concludes with “Refolding And Creasing The Paper Bag,” which sports my favorite title of the album. This track has a loose, fun, optimistic vibe that I like.

CD Track List
The Sighting was released on December 3, 2016.
Posted by Michael Doherty at 11:21 PM