Now More Than Ever: The History Of Chicago DVD Review 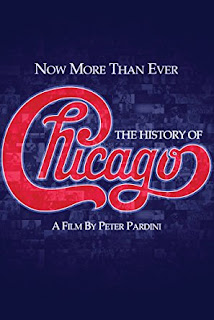 Chicago was one of the first bands I ever saw in concert. I was twelve years old. The band was touring to support 17, which was a huge record at the time, and – as far as I know – remains the group’s best-selling album. It was after that album and tour that Peter Cetera left the group to pursue a solo career. The band’s next album, 18, wasn’t as good, though it did have a few hits, including a reworked version of “25 Or 6 To 4,” and after that I lost track of the band’s progress, though I never lost my passion for their early material. So, I was excited to learn more about the band through Now More Than Ever: The History Of Chicago, a documentary film telling the story of the band from its inception to the present. The film’s title comes from the final section of “Ballet For A Girl In Buchannon,” from the band’s second album.

The film begins with an excited concert crowd moments before the band takes the stage. But before we hear a note, the documentary takes us back to the beginning. The film is divided into chapters, each marked by a Roman numeral, much like the band’s albums, and goes in chronological order, each year appearing briefly on screen to keep us aware of just when each event happened. The band members themselves, through a series of recent interviews, tell their story. Not everyone from the band’s history, however, is interviewed. Of the band’s original lineup, there are interviews with Robert Lamm, Lee Loughnane, Walt Parazaider, Danny Seraphine and Jimmy Pankow. Conspicuously absent from the movie is Peter Cetera, who declined to be interviewed. The film is actually produced by the band, so perhaps that has something to do with it. It’s a shame, whatever the reason, because obviously Peter played a huge role in the band’s history and success.

It’s interesting that – like many bands – Chicago began as a cover band. Lee Loughnane mentions that the band got fired once for playing an original song. And actor Joe Mantegna tells an anecdote about his band being asked to play because Chicago Transit Authority was going to be fired. Jimmy Pankow provides this colorful description of the band’s early days: “Our first gig was at the club GiGi, an upholstered sewer on the south side of Chicago. The only people in the audience were my parents.” Of course, the band would soon find success, after moving to Los Angeles. There are plenty of interesting anecdotes from this time, like how they all lived in one house, and about the band touring with Big Brother And The Holding Company. Walt Parazaider tells the story of meeting Jimi Hendrix, and the way Hendrix complimented the band: “The horns are like one set of lungs, and your guitar player is better than me.” One thing that is not mentioned, oddly, is the band’s name changing from Chicago Transit Authority to simply Chicago (actually, they don’t really talk much about the name at all, how they came to be called Chicago Transit Authority in the first place).

They do talk about their success, about certain songs such as “Does Anybody Really Know What Time It Is” (which apparently was the first thing they ever recorded together), “Ballet For A Girl In Buchannon” (which is one of the chapter titles for the film) and “25 Or 6 To 4,” including that song title’s meaning. It “indicates the time in the morning, twenty-five minutes to 4 a.m.” And though Peter Cetera did not take part in the making of this documentary, he is of course discussed. It’s interesting that when he began writing songs like “If You Leave Me Now,” not everyone in the band appreciated it, and Terry Kath did not want to do ballads, but rather wanted to continue doing more jazzy material. Nor did everyone in the band appreciate Peter Cetera becoming the face of the band during those days when music videos became so popular. By the way, David Foster, who co-wrote material with Peter Cetera, is also interviewed, and he comes across as rather full of himself, pointing out his Grammy trophies. At least he admits, “I think I gave them a lot of success, but I think I softened their sound past the point of where I should have.”

The anecdotes about their chartered plane being flown by military pilots are pretty wild, and all the material about Caribou Ranch is particularly fascinating. It was a recording studio that was far enough away from any town that the authorities did not interfere at all, and so things got pretty crazy there. And of course the film does get into the changes in the band’s lineup, and includes interviews with more recent members like Chris Pinnick (who replaced Donnie Dacus who replaced Terry Kath after Terry’s death), Jason Scheff, and Tris Imboden. There are also some snippets of old interviews with band members, as well as some good footage of the band performing. But the film really rushes through the nineties and more recent years, just basically mentioning album releases and further additions to the band. I would have liked more information about this time period. It does, however, spend a bit of time on the band’s long-overdue induction into the Rock And Roll Hall Of Fame. The film feels like a celebration of the band, which might not be surprising considering it was produced by the band. But this is a band that deserves a celebration, and the film has an optimistic and positive tone which I appreciate.

Now More Than Ever: The History Of Chicago was directed by Peter Pardini, and was released on DVD on October 13, 2017 through MVD Visual. The DVD contains no special features.
Posted by Michael Doherty at 9:38 PM