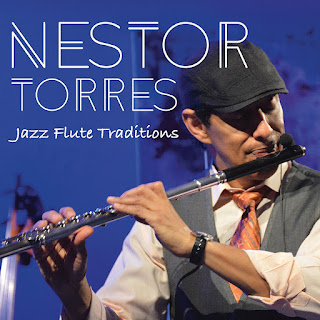 Jazz flautist Nestor Torres recorded his new album, Jazz Flute Traditions, at WDNA Studios, but it has the feel of a concert recording. Clearly, there is some audience there, for we can hear applause. Whether it’s a small group of friends, or folks who work at the station, or fans, it doesn’t matter. It gives the recording an exciting and dynamic feel. And the music itself is lively and often beautiful. On these tracks, Nestor Torres pay homage to those flautists who came before him, choosing many compositions written by other flute-players like Moe Koffman and Esy Morales. Joining Nestor Torres on this release are Silvano Monasterios on piano, Jamie Ousley on bass, Michael Piolet on drums and Jose Gregorio Hernandez on percussion. He also has a few special guests joining him on certain tracks.

Nestor Torres kicks off the new album with a rendition of Moe Koffman’s “The Swingin’ Shepherd Blues,” here titled “Swingin’ Shepherds Blues.” This is wonderful stuff, and it put me in a great mood immediately, even before that cool bass solo. The piano intro is a delight, but of course it’s that flute that really works to lift me up and hold me up. Moe Koffman was a flautist (and also played saxophone), so the composition is custom-made for some wonderful work on flute, and Nestor Torres delivers an impressive performance. He follows that with Herbie Mann’s “Memphis Underground,” another composition specifically for flute. That good groove at the beginning is more pronounced than in Mann’s original, sounding like the jazz version of an early Stax recording. Yeah, it’s great bloody fun.  I dig that percussion. The rhythm changes, taking on a much stronger Latin feel as the tune goes on. This track features Miguel Russell on percussion and Ian Muñoz on alto saxophone. That lead on sax is exciting, and the crowd at the studio is certainly appreciative. And toward the end, there is a wonderful section with just percussion backing Nestor’s flute.

“Jungle Fantasy,” written by flute-player Esy Morales, establishes a great rhythm in its opening moments, with piano, bass and percussion. Though technically I suppose a piano is a percussion instrument, and here it is certainly helping to create and keep the rhythm. Morales’ playing on the original recording is extraordinary, and here Torres is also truly impressive, paying homage to the original version but adding his own style. Silvano Monasterios also gives us some great work on keys. Miguel Russell joins the group on percussion.

After that, Nestor Torres plays the first tune on the album not written by a flautist – a combination of pianist/guitarist Joaquin Rodrigo’s “Adagio From Concierto De Aranjuez” and pianist Chick Corea’s “Spain.” It is rather pretty at the beginning, and brings to mind Italian westerns. It has that flavor, you know? It then suddenly kicks in with a surprising force and joy. This track features some wonderful work on piano and bass. “Serenade To A Cuckoo” is another highlight. This one grabs me right at the start with that cool bass line. And then I love the way the flute plays over that line, like adding to the conversation, to the story. “Serenade To A Cuckoo” was written and originally recorded by Roland Kirk, and a few years later covered by Jethro Tull on that band’s first album. Ian Muñoz plays alto saxophone on this track. Nestor Torres combines Luciano Berio’s “Sequenza I” and Eric Dolphy’s “Gazzelloni,” a pairing that totally makes sense, as Berio apparently wrote “Sequenza” for flute-player Severino Gazzelloni. “Sequenza I” is presented as a flute solo, as Berio originally recorded it. And then things suddenly get delightfully, magically chaotic during “Gazzelloni.”

Nestor Torres covers a second Chick Corea composition with “Windows.” I like that the pretty and mellow intro on piano is allowed to go for a little bit before Nestor Torres comes in on flute. This version has something of a late-night vibe, but then suddenly at times it’s like bursts of sunshine come in, and halfway through, it’s like day has broken. That’s followed by a pretty rendition of Cole Porter’s “So In Love,” from the musical Kiss Me, Kate. The CD then concludes with “Miami Beach Rhumba,” written by pianist Irving Fields, John A. Camacho and lyricist Albert Gamse. Nestor Torres begins this one with a flute solo, and it just takes off from there. The group stretches out a bit on this one, with some wonderful solos, particularly by Silvano Monasterios on piano (and check out the playful nod to “Tequila” during the percussion solo).