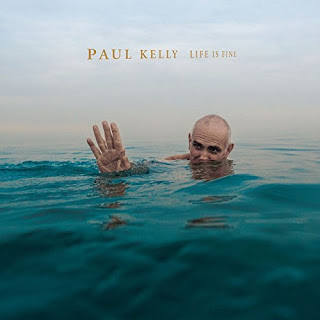 A few months ago I saw Paul Kelly and Charlie Owen in concert, supporting their October 2016 release, Death’s Dateless Night. While they focused a good deal of their set on music from that album, they also played a new song, “Life Is Fine,” a Langston Hughes poem set to music. It was one of many highlights from the show, and now it is the title track of Paul Kelly’s impressive new album. And even with all the craziness in the world these days, I can’t help but believe that life is fine while listening to Paul Kelly’s music. Certainly life can be good for the length of this disc. Life Is Fine features all original material, written or co-written by Paul Kelly. As on some previous releases (such as Spring And Fall and The Merri Soul Sessions), Vika Bull and Linda Bull join Paul Kelly on backing vocals. Each takes a turn on lead vocals as well.

The album opens with “Rising Moon,” a powerful song that grabs you immediately with its opening notes on piano and doesn’t let go. Paul Kelly delivers a strong vocal performance here, backed by Vika Bull and Linda Bull. “I took your hand and you didn’t let go/And my poor heart jumped out of my chest.” And check out these lines: “That moon changed its colour/As it rose in the sky/And we changed each other/Under heaven’s bright eye/I might live to a hundred/I might die soon/But I’ll never forget that rising moon.” “Rising Moon” was written by Paul Kelly and Bill Miller. Paul Kelly then raises our spirits with “Finally Something Good,” a wonderful tune that seems designed to make us smile, and works beautifully. This one includes a play on a line from Macbeth at the end, as Paul sings “Something good this way comes” (the famous passage from Macbeth reads, “By the pricking of my thumbs/Something wicked this way comes”). This is certainly not the first time Paul Kelly has turned to Shakespeare. Last year, in addition to Death’s Dateless Night, he released Seven Sonnets & A Song, in which he set some of Shakespeare’s sonnets to music.

“Firewood And Candles” has a bit of a Bob Dylan flavor. It’s a song about spending a night with a woman, and forgetting about the world. “We’re gonna shut out the world/Forget about the TV news/Firewood and candles/Tonight they’re gonna see us through.” Sounds like a perfect plan, particularly these days. I love Cameron Bruce’s work on keys on this track, with a 1960s flavor. “Firewood And Candles” was written by Paul Kelly and Bill Miller. That’s followed by “My Man’s Got A Cold,” which features Vika Bull on lead vocals. This is a delicious, playful and yet strangely sexy, song. “Could be the worst ever cold/In the history of the world/And I’ve got a front seat row/To the whole sorry show.” And I love these lines: “And he’s taken every drug/But they just won’t kill that bug/Now he’s worried it might get worse/He’s thinking about the hearse.” And Vika totally sells it. And, oh, what a rough solution she offers at the end! This is completely fucking wonderful.

“Leah: The Sequel” is another playful track, a sequel to Roy Orbison’s “Leah.” If you know that song, you’ll remember that the main character goes diving for pearls to make a necklace for Leah, and nearly drowns. But then it turns out to be a dream about his lost love. Well, in this song it is no dream. The song begins with the guy on the beach, someone performing CPR on him. And when he hands the pearl to Leah, she’s his forever, which may or may not turn out to be what he wanted. “Now I’m working in the cannery, hosing down the floor for her old man/And I’m hoping I get used to it, ‘cause Leah’s got a ten year plan/She’s hidden my snorkel, says I’m never going diving again.” I love Vika and Linda’s backing vocals sort of recreating Roy Orbison’s “Leah, Leah.” And then “Josephina” is a sweet and joyful and kind of catchy love song. “I’ll get a job really soon, Josephina/I know that’s what you want me to do, Josephina.”

Linda Bull sings lead on “Don’t Explain,” which has a good pop vibe and some humorous lyrics, such as “Don’t look so serious/It doesn’t suit your face” and “You sure know how to use your hands/But you don’t have a great attention span.” It’s not really a funny song, but its final lines make me laugh. Lucky Oceans then joins Paul Kelly on pedal steel for “Petrichor.” “I wish I knew the names of things/Trees and flowers, birds that sing/You’re much better at that kind of thing than I.” The CD concludes with its title track, “Life Is Fine,” the Langston Hughes poem set to music. This is a beautiful and uplifting song, leaving us with the lines, “Life is fine! Fine as wine! Life is fine!” Must do our best to remember that in these dark days.

CD Track List
Life Is Fine was released on August 11, 2017. By the way, Paul Kelly will be touring the U.S. in September and October. I highly recommend attending at least one of those concerts if you’re able.
Posted by Michael Doherty at 9:34 PM