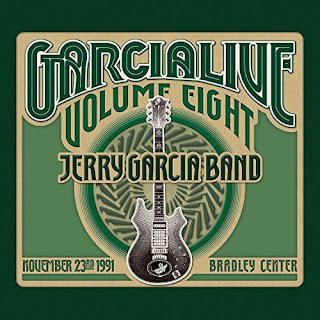 The Jerry Garcia Band hit the road in the fall of 1991 for a tour of the east coast, with a few Midwest stops at the end. (I saw only the Worcester show of that tour, and I remember it being a good one.) One of the last shows of that November tour was at the Bradley Center in Milwaukee, and that show was released as Garcia Live Volume Eight, a two-disc set. The Jerry Garcia Band at the time of this recording was Jerry Garcia on guitar and vocals, Melvin Seals on keyboards, John Kahn on bass, David Kemper on drums, Gloria Jones on vocals, and Jacklyn LaBranch on vocals.

The band kicks off the show with crowd favorite “Cats Under The Stars.” I always want to call this one “Cats Down Under The Stars,” since that’s what Jerry’s singing. Anyway, it’s a great way to start the show, with joy and energy. Listen to the delight in Jerry’s voice as he sings, “Feels like it’s all right.” Indeed! The band is loose and ready right out of the gate. And they follow “Cats Under The Stars” with a wonderful “They Love Each Other.” Melvin Seals delivers right from the beginning of this one. This is a song that Jerry did with the Grateful Dead too, but I’m really fond of the way Garcia Band does it here, with the backing vocalists. This is such a happy-sounding song. Check out Jerry’s guitar toward the end of the jam. Then there’s the good groove of “Lay Down Sally” to keep you smiling. That’s followed by a sweet rendition of “The Night They Drove Old Dixie Down,” with Jerry’s vocals full of passion, so clear, so good. And Melvin really gets into it, delivering some wonderful work on keys. This track is one of the set’s highlights. Then, after a pretty good “Reuben And Cherise,” the band gets things grooving with “Money Honey,” and again those backing vocalists – Gloria and Jacklyn – are responsible for a lot of the love I have for this version. And Melvin is cooking, particularly during the jam. The band is clearly having a good time. The first set concludes with a good version of “My Brothers And Sisters” and a rockin’ “Deal,” with an energetic jam.

The second set opens with a cover of Van Morrison’s “Bright Side Of The Road,” a song I don’t think I ever saw Jerry perform. This is a really nice version too, and Jerry is clearly into it. After a decent “Waiting For A Miracle,” Jerry gets a bit bluesy with “Think,” written by Jimmy McCracklin and Deadric Malone. I love the way his guitar and Melvin’s keyboard work together on this track, especially during Jerry’s extended lead section in the jam. And then they trade off, with Melvin taking the lead and Jerry supporting him. Wonderful stuff. That’s followed by a cool version of “Shining Star,” a mix of pop and gospel sounds. Before you know it, the band has turned it into a relaxed, sweet jam, surprisingly another of the set’s highlights. “I want to be right here where you are until my dying day/Oh, baby.” Things then get ridiculously fun with “Ain’t No Bread In The Breadbox.” This one should put a smile on the face of even the most troubled among us. That’s followed by a glorious “That Lucky Old Sun.” The backing vocalists really shine here, helping to make this track another highlight. The show then ends on another strong note, with a delicious cover of Bob Dylan’s “Tangled Up In Blue.”