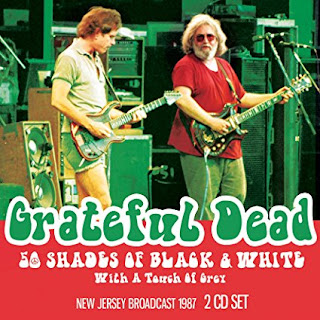 Yes, 50 Shades Of Black & White With A Touch Of Grey is another of those unofficial releases, based on a radio broadcast. And yes, I have mixed feelings about the title. And though the liner notes say this two-disc set contains the complete show that the Grateful Dead performed on April 7, 1987, it’s actually missing one song – the encore, “Quinn The Eskimo.” I should also note right away that there are a few station identifications, as heard in the original broadcast.

This show was exactly one year before my first show, and the band opens it with “Touch Of Grey,” which is the same song with which they’d open my first show a year later. The sound isn’t perfect (a bit muddy), but the energy is high, and the band is clearly ready to deliver. Oh, “We will get by.” I still believe it. The band then goes right into a good, thumping “New Minglewood Blues,” and we get some delicious bursts on organ from Brent during the jam, followed by Jerry taking it higher on guitar, and all the while that pulsing rhythm continues to keep us all on our feet – like a train cutting through a jungle. “And it’s T right here in Jersey where the little girls know what to do.” Though it’s a radio broadcast, it sounds like an audience recording rather than a soundboard. But I’m into it. A lot of my old tapes are audience recordings, and I kind of miss that certain sound quality. It puts me there, you know? Gives us more of the atmosphere of the place and all.

Jerry delivers a good “Friend Of The Devil.” The jam is sweet, with some nice work by Brent on keys, and perhaps a little more energy than some later renditions. There is a radio station identification over the sound of the audience before Bob leads the band into a slightly relaxed rendition of “Beat It On Down The Line.” There is a bit of a false start to “Stagger Lee,” and does Jerry laugh? He seems to be having a damn good time with this one, and as a result it’s a really good version. Another station identification comes after it, however, breaking up the energy. Then Bob goes into a breezy, fun pairing of “Mama Tried” and “Big River.” The guys are really cooking on “Big River.” There seems to be a weird cut as they go into “West L.A. Fadeaway.” It’s a pretty good version, and they follow it with another song from In The Dark (which would be released a few months after this show), “Hell In A Bucket.” This one has a false start, the band humorously adding a big finish to its false start. “At least I’m enjoying the ride.” They then finish up the first set with “Don’t Ease Me In.”

The second disc contains the complete second set. It’s eighty-three minutes. For some reason, I’d been under the impression that CDs could only be eighty minutes. I was wrong. Anyway, Phil kicks off the second set with “Box Of Rain,” joking with the Jersey crowd by singing “What do you yous want me to do?” They follow that with “I Need A Miracle,” which very quickly leads to an energetic “Bertha.” Jerry then slows things down with a really good rendition of “Ship Of Fools.” Which is more expressive here – his voice or his guitar? Both make this one of the set’s highlights. After a pause (rare in the second set in those days), the band launches into “Man Smart, Woman Smarter.” It’s not the best version, but it’s still fun to dance to. The crowd claps along at the end, and “Drums” flows straight out of that, holding onto that rhythm for a little while, and making this a damn good “Drums” segment. The energy is fantastic, and you can hear the crowd responding. Even though this is a good show, there really isn’t a lot of jamming. No “Playing In The Band” or “Eyes Of The World” for the band to stretch out on, and it turns out that at fourteen minutes, “Drums” is the longest tune of the night. And as it builds, we actually get the addition of guitar, which is surprising and wild. The guitars begin to overpower the drums as the band slides into what turns out to be a really nice “Space.”

From there, “Gimme Some Lovin’” emerges. It’s a halfway decent version, and it breaks down to give way to “Morning Dew.” Jerry’s vocal performance is fantastic, emotionally charged, powerful – and so, even though the version is a bit messy at moments, it ends up being another highlight of the set. The jam at the end is beautiful. But the band isn’t done. As they start “Throwing Stones,” there is a radio station identification, the only one to actually interfere with the music. This is a good “Throwing Stones.” “The future’s here, we are it, we are on our own.” It leads straight into “Not Fade Away” to end the second set. As I mentioned before, the encore is not included.