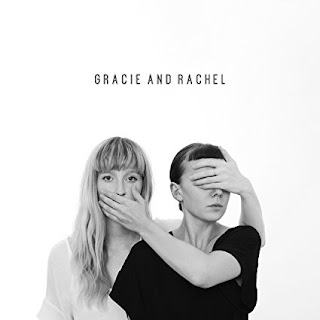 Gracie And Rachel’s self-titled debut album is one of the year’s most intriguing releases. The lead instruments are piano (Gracie Coates) and violin (Rachel Ruggles), with percussion, bass and synthesizers rounding out the sound. No guitars. The music can be beautiful, but can also set you at unease. There is magic in these tracks, but a magic that isn’t always uplifting or kind. It’s a remarkable album, featuring all original material written by Gracie Coates and Rachel Ruggles. Garrett Eaton is on percussion, bass, synthesizers and backing vocals (Garrett also produced most of the tracks). David Linard provides additional percussion.

The album begins with “Tiptoe,” a gorgeous and haunting track whose second line, “Violin and black and white,” is a reference to the songwriters’ instruments. And I wonder how autobiographical the song – and the album – might be. Then, when the song bursts in, a powerful landscape is created, with beauty and the feeling of danger. And toward the end, the repetition of “tiptoe” and “let go” make these words feel more like pure sounds, communication occurring almost in spite of language rather than because of it. “Tiptoe” is followed by “Sing Song,” and again there seems to be an autobiographical element to the music, with lines like “Making mistakes until mistakes help us write a song.” But the song starts with some backward sounds, like a quick returning to a beginning. The vocals here are wonderful, particularly in the sections without lyrics, this song mixing mundane details with ethereal sounds to create a fantastic and strange place, like angels bursting from a repressive human skin. “Sing Song” ends as it began, going backward, a loop, like they’ll keep trying, just as they sing “Keep on, keep on, keeping on.”

With “Only A Child” there is a sense of urgency in the sound at the start. I feel like a child peeking out from behind a rock at a scene I don’t fully comprehend and filling in the gaps with monsters and fancy. Listening to this album is like stepping into a place where we are not completely at home, but are captivated. “I am a nobody, posing as a someone/I am only, only just only, a child, walking to run/Who do I think I am/Who do I think I am.” Then “Go” begins with an electric pulse, and builds from there. As they sing “So let go, let go of going slow,” they seem to be urging us to follow our excitement. Will it lead to bliss or darkness, or to transformation? Not sure, but the song seems to want us to find out. This one too ends as it begins, with that pulse.

In “(Un)comfortable,” they sing, “Welcome to a world that’s hard to leave/Welcome to a world of make believe/I am getting so very comfortable, and I don’t want to get that way.” The song is so inviting and pretty that we become comfortable in this world too, wanting to immerse ourselves in it. This is one of my favorite tracks. “Take me to a cemetery full of life/Take me to uncomfortable paradise.” That’s what this album feels like to me – a place where even contradictions have a strangely natural beauty. I feel safe with these voices, like in “Let It Out,” a powerful song that seems to be offering comfort, guiding us through the darkness.  “And you just keep screaming but you don’t know what it’s good for/‘Cause no matter how loud you yell, no one can hear you anymore.”