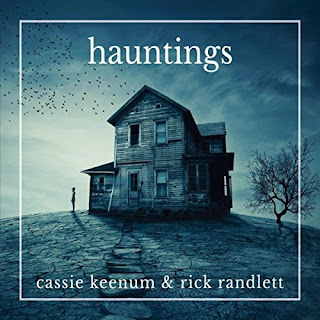 Leonard Cohen is my favorite songwriter, and I’m always excited to hear a new cover of one of his songs. The song that is most often covered these days is “Hallelujah,” a tune from Various Positions, my favorite Leonard Cohen album. Cassie Keenum & Rick Randlett include a rendition of that song on their debut release together, Hauntings, and it is that track that initially sparked my interest in this album. But before I even got to that song (it’s the fifth track), I became a fan of Keenum and Randlett’s work. They are a blues duo based in Florida, and apart from “Hallelujah” the album contains original material. Joining them on this release are Nicole Wagner on bass and Rusty Valentine on drums, as well as a couple of guest musicians on certain tracks.

The CD opens with “Seventh Day,” a cool bluesy number, with somewhat sparse instrumentation to give greater focus to the vocals. As the album’s title promises, this song does have a haunting quality, both in the way the vocals are delivered and in that guitar part. “On the seventh day, while the good lord was sleeping/On the seventh day, the devil went creeping/On the seventh day, on the seventh hour/The devil found a woman and he offered her a flower.” It was written by Cassie Keenum. “Seventh Day” is followed by “One More Last Time,” another cool blues tune with a good groove, plus some nice work by Little Mike on harmonica. This song has a relaxed feel that I love, and includes a verse with references to Romeo And Juliet. I’m a huge fan of Shakespeare’s work, and appreciate this verse, which includes these lines: “Like Juliet and Romeo/This love is poison to us both/We were star-crossed from the start/Doomed when we tangled these two hearts.”

“Won’t Make That Mistake Again” has something of a classic vibe, and features a wonderful vocal performance by Cassie Keenum. “I saw it coming/Lord knows it’s true/I was a fool to love someone like you/But I’ve learned my lesson/I won’t make that mistake again.” This one was written by Rick Randlett, and includes a nice lead guitar part by him. That’s followed by “All Along,” which has a meaner groove and vibe that is absolutely delicious.

So I got all of that before hearing their rendition of “Hallelujah,” the track that caused me to pop in the disc. Their version of this beloved song begins with an instrumental section, somewhat quietly, kind of sneaking up on you. It’s a pretty rendition, with vocals and guitar, though it includes just three verses. Cassie sings the first two verses from the album version and one more recent verse, the one that begins “Well, maybe there’s a god above/But all I’ve ever learned from love/Is how to shoot somebody who outdrew you.” I wonder why they chose to leave out the other verses, especially the final verse, which begins “I did my best, it wasn’t much.” Still, it’s a heartfelt version, and Leonard Cohen fans should appreciate it

That’s followed by “She’s Gone,” an interesting duet that was written by Ed Kuykendall and Rick Randlett, and features Mitch Rogers on keys. This one too has something of a haunting quality. “Early In The Morning” has the feel of a classic blues number, though it was written by Rick Randlett. “Early in the morning, as I watch the rising sun/Early in the morning, as I watch the rising sun/Got a bad, bad feeling all my trouble has begun.” Little Mike joins them again on harmonica for this track, delivering some wonderful stuff.

“Get Lit” is a good tune about using alcohol to deal with one’s problems. And yes, getting lit often seems like the solution, especially these days. While it’s the state of the world that causes me to frequently turn to the bottle (how the hell did Donald Trump end up in the White House, and how is he still there?), in this song it’s the end of a relationship that does it. “Gonna tell myself it’s over/But I just can’t do it sober.” Cassie Keenum delivers another wonderful vocal performance here. The album concludes with another highlight, “How Long,” and again, the focus is on the vocals. “It’s long, lonely road I got to take/But brother, I’m so tired of the wait/How long, how long, oh how long must I wait?”

CD Track List
Hauntings is scheduled to be released on September 23, 2017.
Posted by Michael Doherty at 9:07 PM