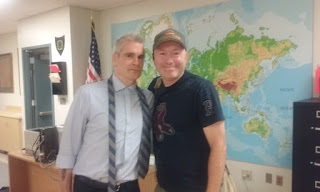 The other day (actually, I think it was yesterday) I had the fortune of meeting Henry Rollins. Occasionally at work I get to meet musicians and performers I admire. And I’ve never been disappointed. That is, I’ve never had a certain view of someone shattered by meeting him or her – at least, not in a negative way. I’m sometimes struck by how gracious and kind and considerate people are. Actually, that happens quite frequently. I sent this text message to a friend yesterday (it was yesterday – I checked): “Henry Rollins just called me ‘sir.’ Is my life complete?”

A friend turned me on to Black Flag when I was twelve or thirteen years old. This was the mid-1980s, when pop music seemed to rule over everything. I was already beginning to drift away from that, but more toward late 1960s music, buying albums by The Kinks, Jefferson Airplane, Cream and of course the Grateful Dead. Some friends went in another direction, buying records by bands like Descendents, Dead Kennedys, Agent Orange, Circle Jerks and Black Flag. And so of course I listened to those records too. Do kids still do that – get together to listen to new albums (or albums they just discovered)? I hope so. That was an important part of my childhood. Hell, it’s an important part of my adulthood too. And it’s something special when I’m able as an adult to meet the people I listened to when I was growing up, a time when we were serious about music, excited about it, when one’s music collection was something of a defining characteristic, when we were figuring out who we were and who we wanted to be, a time when everything mattered. I remember then that our records really felt like our records. It truly felt like our music, like we had a stake in it. It was a piece of us.

I think kids these days are missing out by not having to go the store and purchase records. How important is any given album, or even a song, to them when they can have instant access to basically everything? All of this was on my mind when I met Henry Rollins. I didn’t mention any of it; there wasn’t time. And he’s probably heard it before. In more recent years, I’ve enjoyed reading his column in the LA Weekly. And I hope I get a chance to attend one of his spoken word performances. But for now I’m thrilled that I got a chance to meet him, to remember and tap into the excitement the first time I listened to a record like Damaged.
Posted by Michael Doherty at 9:13 PM