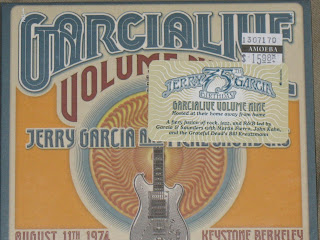 August 1st would have been Jerry Garcia’s seventy-fifth birthday, and just before that date, a new volume in the Garcia Live concert recordings series was released. Garcia Live Volume Nine contains the complete show that Jerry Garcia and Merl Saunders performed on August 11, 1974 at the Keystone. The band this night included Grateful Dead drummer Bill Kreutzmann, as well as John Kahn on bass, and Martin Fiero on flute and saxophone. This two-disc set includes liner notes by Merl Saunders, Jr.

The band opens the show with “That’s What Love Will Make You Do.” There is a slight hesitation at the beginning, but once that great groove is established by Bill Kreutzmann and John Kahn, things start moving, start flowing well, and Martin Fiero adds great touches on saxophone, supporting Jerry’s wonderful vocals. I’m particularly fond of John Kahn’s bass work on this rendition. Merl delivers some fun stuff on keys during the jam, really leading the band during that section. Martin then takes a turn at lead on sax. I always loved the addition of saxophone to the Jerry Garcia Band, and was fortunate enough to see Clarence Clemons play with Jerry a couple of times. Here, Martin really propels the song to another level, and you can hear the crowd respond appreciatively. Martin Fiero then switches to flute for his own composition, “La La,” a light and pretty instrumental number that Fiero leads from the beginning. But check out Bill Kreutzmann’s wonderful jazzy drumming here. This song has kind of a pleasant vibe, but also has surprises and some phenomenal playing. This is one to pay attention to. There are some moments that feel akin to those delicious 1973 and 1974 versions of “Eyes Of The World,” especially in the way Jerry’s guitar has a free-flowing and joyous sound. The song starts to soar toward the end, and then right at the end becomes spacey. This track is wonderful. They then dip into bluesy waters with “It Ain’t No Use,” with Martin Fiero back on saxophone. This one builds nicely to become an energetic blues number. The first set then concludes with a seriously fun and groovy version of “Mystery Train.” This one just gets better and better.

The second set gets off to an excellent start with “The Harder They Come.” The first reggae album I ever bought, when I was like fourteen or fifteen, was a Jimmy Cliff cassette, and I’ve had a love for his music ever since. Jerry Garcia and Merl Saunders deliver a nice, long rendition here, really digging into that groove. And this is a song that still resonates strongly. Plus, there’s some great work on saxophone, as well as some joyous work on guitar by Jerry Garcia. This track should put a smile on your face. “Ain’t No Woman (Like The One I’ve Got)” is not a song I would associate with Jerry Garcia. It’s not a bad song, but seems an odd, surprising choice. Jerry Garcia and Merl Saunders deliver an instrumental rendition. For this one, Martin Ferio switches again to flute, playing what would be the vocal line on it at the beginning. But a little later the track develops a funky groove, with Jerry Garcia and John Kahn working so well together, and Merl free to go for it on keys. The jam gets a little weird, at one point sounding like a computerized phone dialing or something. They follow that with “It’s Too Late,” which has a delicious, classic vibe, especially with the presence of saxophone. Things get even more fun with “(I’m A) Road Runner,” a song about a restless soul hitting the road, certainly an appropriate subject for Jerry Garcia, and for fans of the Grateful Dead. They then conclude the show with “The Night They Drove Old Dixie Down.” It’s not a bad rendition, but the version on Garcia Live Volume Eight is much better.