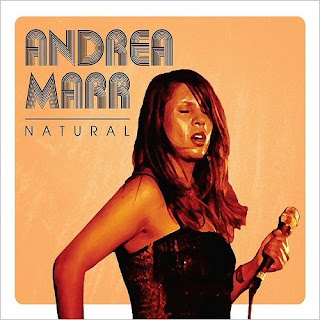 Andrea Marr’s new album, Natural, is bursting with horns and soul, and has a classic sound, though it features mostly original material. In fact, there are only two covers on this album; the rest were written or co-written by Andrea Marr. Several of these tracks were recorded five years ago and appeared on Andrea Marr’s Sass & Brass EP. The rest were recorded this year, with a mostly different set of musicians (though Dave Reynolds on guitar and Sean Rankin on trumpet play on all tracks). Andrea Marr is based in Melbourne, Australia.

Andrea Marr kicks off the album with “Force Of Nature,” a song that comes on strong, with a whole lot of energy, like the song itself is trying to be the force Andrea sings of – though the force spoken about in this song is a man. “I’m like a leaf in the wind, blowing all out of control/His love is like a whirlwind blowing right through my soul now.” I dig the horns.  And though Andrea is belting out the lyrics here and there is a lot of energy behind her vocals, I feel some of the other tracks feature her best vocal performances. One of those tracks is the following song, “Rock Steady,” one of the album’s two covers. It’s a funky gem written and originally recorded by Aretha Franklin. Andrea does a great job with it, though I do miss the backing vocalists echoing “What it is” from Aretha’s original version. Andrea really lets loose here, getting into it, living it, working it, and seeming to have a lot of fun. What a good groove. And of course I love the horns. In the second half of the song, the backing vocalists come in to repeat “Rock steady, what it is, what it is,” while Andrea gets even more wild. And check out that guitar work at the end.

“Mama Got It Wrong Sometimes Too” is a seriously a cool tune, in which Andrea pays tribute to motherhood while also keeping in mind that mothers are human.  “Mama held your hand, did the best that she could/You’ll never know until you stand where she stood/Hey, child, do what your mama told you to/Hey, child, do what your mama told you to/But you got to remember mama got it wrong sometimes too.” This song has a great rhythm, and features a sort of spoken word section, where Andrea is backed by some sparse percussion that grows as she continues. And the song then builds again from there. This is one of my favorites, and is one of the songs from the earlier EP. That’s followed by “Grateful,” also a strong track, in which Andrea sings, “Every day that I’m breathing, I’m grateful, I know/Every day that I’m walking, talking, dancing, flying/Grateful, I know.” I feel this way a good deal of the time, but a reminder is still needed at times, particularly in these days of rampant lies and horrors from the cretins occupying the nation’s capital, days when it is so easy to slip into anger and despair. I’m guessing a lot of folks are going to appreciate this song.

Another favorite is “That’s Where Love Ends,” a delicious, classic-sounding soul number that was included on the earlier EP.  This one features an excellent vocal performance – strong, emotional, heartfelt. Listen to her sing, “Like a note that hangs in the air after the song ends/Oh, that’s where my love will find you.” And her voice rises to some wonderful heights after that. Plus, this track features some excellent work on saxophone. This is a fantastic track from beginning to end. It’s followed by the fun “Let’s Take It To The Bedroom.” No, nothing subtle about this one. “So if it’s all right with you, let’s take it to the bedroom/Never too soon, baby/Take it to the bedroom.” Hey, it’s all right with me! And then there is a sexy kind of spoken word section. “You know I wrote this song/Because men think that women want to talk all night long/You know, sometimes I don’t want to talk at all/I just, I just, I just want to get busy.” My girlfriend is going to appreciate this one. I have to play it for her soon.

“What Do I Have To Do (To Prove My Love To You),” the album’s other cover, is a kind of funky and groovy number written and originally performed by Marva Whitney. Andrea really sinks her teeth into this track, and the results are seriously good. And there is plenty of cool work from the horn players, particularly in the jam in the middle of the track. The next track, “Snakes,” also has a funky vibe. And guess which people I think of when I hear a line like “Some people walking around, lies dripping from their tongues” (hint: they are pretending to be the leaders of the country). And, hey, supporters of the current administration might want to pay attention to this line: “’Cause when a liar keeps lying, only a fool is gonna trust.”

CD Track List
Natural is scheduled to be released on October 31, 2017.
Posted by Michael Doherty at 8:48 PM