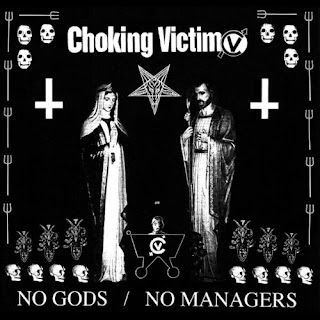 Nearly every day, someone recommends an album or band to me. I always write down the name of the band or album, with the intention of checking it out later. And then sometimes I do check it out, on those occasions when I’m able to actually read my writing after discovering the little slip of paper in my pocket or bag or under the seat of my car. On a recent job, one of the actors (who is also a musician himself) recommended (among other things) Choking Victim’s No Gods/No Managers. I trusted his taste in music, in part because he’s so passionate and articulate about the things he loves, and in part because I ran into him at a Cat Stevens concert last year and so I knew his musical tastes weren’t limited to a single genre, and so I purchased the album.

It’s fantastic. And perhaps it carries even more weight in these days of brazen Nazis, these days of Trump, these days of anger and frustration, these days when we turn to music as both refuge and weapon (or at least shield). The combination of hardcore punk and ska feels like the perfect answer to the dismal state of our country. No Gods/No Managers is the only full-length studio release of Choking Victim, who broke up immediately after finishing the album. (Scott Sturgeon then created Leftover Crack.) The album has a ton of energy and a whole lot to say. It opens with “500 Channels.” Check out these lines: “Five hundred channels of a daydream stimulation/Helps me to resent my life and raise my expectations/Locked into re-runs, your memories repeating/And all your ideals seems so self-defeating/For you and yours, the Pepsi generation/And when you’re discontent, you change the TV station.”

“Crack Rock Steady” is a ridiculously fun ska tune, and you might start singing along before you realize just what they’re singing. “Crack rock steady/Are you ready to stop/The rotten blue menace/Let’s go kill us a cop.” But how serious are they? The line “See a frown? Turn that cross upside down” is pretty damn funny, so I don’t think the lyrics are meant to be taken at face value. And is that crack or pot that he’s smoking at the beginning? I’d guess from the song’s title that it’s crack, but later in the song they mention ganja. And in the next song, they seem to be advocating suicide, but again, I don’t think it’s meant to be taken seriously. (Though there are some people currently in power whose ends by their own hands I would applaud.) “Suicide (A Better Way)” is a good song to dance to, to really let loose. “In My Grave” then seems to me a reaction to the false promises and scares of an afterlife. And again, it’s a good song to dance to.

“Money” begins with a spoken word piece by Michael Parenti, that is, a brief bit from one of his speeches (you can hear his audience at moments). And when the song begins, it begins with lyrics I think we can all relate to: “I am sick and tired and my money's always spent/And though their jobs are killing me, their money pays my rent.” “Hate Yer State” begins with some backward vocals. I bought the album on CD, so I can’t spin it the other way to hear what’s being said. An old turntable I had when I was a kid had a neutral speed, and I used to listen to that one section of “Stairway To Heaven” backward on it. That was different, of course, since you couldn’t tell just from listening to the song that there was a backward message in there at all. With this song, it’s obvious. Fortunately, someone took the trouble to post this Choking Victim song backward on You Tube, so you can listen to it there.

There is another spoken word piece by Michael Parenti at the beginning of “Fuck America,” and I appreciate this piece more than the first speech. “I don’t like to use to the word ‘U.S. interests.’ That’s why I wish some other critics, friends of ours, would stop saying ‘we go into this country, we go into that country, we do this, and we do that.’ We don’t do anything. They do it to us.” By the way, the line “Fuck World Trade” in “Fuck America” would later be the title of a Leftover Crack album. “Fuck America” leads straight into “War Story,” which I think is one of the strongest tracks lyrically. “I tried to tell you time and time again/The only war worth winning is the war that’s within.” The album ends with “Living The Laws,” which has perhaps the angriest sounds of the album. Well, actually, that song doesn’t conclude the CD; there is a hidden tune on that same track, a very different and totally delightful version of “Crack Rock Steady.” And before that there is a line from Mother Night (an excellent film based on an excellent book), “They say that a hanging man hears glorious music. I wonder what it sounds like.”

CD Track List
No Gods/No Managers was originally released in 1999 on Hellcat Records.
Posted by Michael Doherty at 1:32 PM