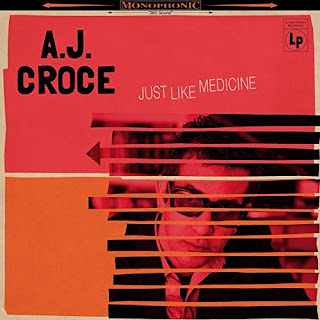 Just Like Medicine, the new album from A.J. Croce, has a whole lot of soul, and is filled with great vibes and musicianship. On several tracks, Croce is joined by gospel vocalists The McCrary Sisters, as well as by the Muscle Shoal Horns, and that should give you an idea of the fantastic sound of this disc. The band backing him consists of Colin Linden on guitar, David Hood on bass, and Bryan Owings on drums. There are also a few important guest musicians on certain tracks.This album features original material, each track written or co-written by A.J. Croce, with one important exception (more on that in a bit). It was produced by Dan Penn.

The album's first track, "Gotta Get Outta My Head," has a cool groove, and opening lines that I love: "Gotta get outta my head/'Cause I can't take the company." There is no pronoun at the start of the line, and so I first figured he was singing about himself, to himself, rather than to another person. You know, not being able to take his own company. It works well either way. The second stanza is clearly directed at another person: "Better stay outta my heart/'Cause you might fall in love with me." This is a bloody great song with a delicious, timeless vibe, and vocal work by Regina McCrary, Deborah McCrary, Ann McCrary and Alfreda McCrary. That's followed by "The Heart That Makes Me Whole," and I immediately dig A.J. Croce's work on piano. This tune has a delicious Stax feel, and there's a good reason for that: Steve Cropper plays electric guitar on this track (and delivers some excellent stuff, as you'd expect). This track also features the Muscle Shoal Horns (Charles Rose, Steve Herrman and Doug Moffet), and is great fun. "You played around with breaking my heart/Almost drove me out of my mind/You won't make the same mistake/'Cause there ain't no more heart to break." There is some wonderful work on backing vocals by the McCrary Sisters. Yeah, there is a tremendous amount of talent going into this one, and in fact it was co-written by Leon Russell, one of the amazing musicians we lost in the cruel year of 2016.

Then Vince Gill joins A.J. Croce on acoustic guitar on "Name Of The Game." This song is ridiculously cool - a bit of folk, a bit of rock, a bit of gospel (the McCrary Sisters are again on backing vocals), and quite a bit of country. If this one reminds you of A.J.'s famous father, there is a reason. It was written by Jim Croce. This is the only song on the album not written or co-written by A.J. Croce. Jim Croce never made an official recording of this song, but apparently had intended to include it on his next (and sadly never-recorded) album. "But I was just a born believer/Getting things to go my way/Baby, losin' ain't the name of the game I play." And Vince Gill gets a chance to demonstrate his talent on guitar.

The album's title track, "Cures Just Like Medicine," has a beautiful soul vibe, and features both the McCrary Sisters and the Muscle Shoal Horns. This is one of the album's highlights (though, really, there isn't a single weak track on this disc). "Raced across a thousand miles/Met my match and started fires/I lost myself in all the wreckage/Then I finally got the message/Someone had to show me the way." I particularly love the play on the word "match" in those lines. There is a moment when it seems the song is about to end, and suddenly the McCrary Sisters sing a cappella, leading to the last section of the song, which is just wonderful. The song gets even better at that point, with some wonderful stuff by the horn players, though it ends soon after that. I want this track to go on at least another couple of minutes, let 'em jam on that groove, see where it goes. "Move On," which follows it, includes a moving vocal performance by A.J. Croce and some sweet work on horns.

The first time I played this disc, I was taking care of other things while it was on, and - perhaps as a result - I misheard the lyrics of "The Other Side Of Love." I thought he was singing, "Homicidal Love." This song was co-written by Dan Penn, who also produced the album. It has the sound and feel of a 1970s smooth soul gem. "There was affection but never enough/Says his prayers to the man above/Hopes to find his way but all he sees today/The other side of love." That's followed by "Full Up." I love the piano on this delightful tune, which has a certain Randy Newman vibe. "I took a lot and now I'm through/You'll tell a lie 'til you believe it's true/I won't tell you what to do." And I appreciate the play on the phrase "there's a catch" in the lines "I took the bait a hundred time/'Cause there's a catch with every line." Then from "I Couldn't Stop," I like these lines: "No one could walk out the door/Love was the curse, not the cure/I couldn't stop." Jeff Taylor plays accordion on this track (though the CD's liner notes on my copy erroneously indicate that he appears on the first track and not this one).

The Muscle Shoals Horns play on "Hold You," a kind of sweet number that I really like. "Now you've gone away/And swear that you'll return/Though love is always short of sight/I can't fight the urge to hold you/I can't fight the urge to hold you." The CD then concludes with "The Roads," which has a bit of an Elvis Costello sound. "I don't want to find I came/This far to see it's all the same/But if I do I'll have to change."

CD Track List
Just Like Medicine was released on August 11, 2017 on Seedling Records, through Compass Records.
Posted by Michael Doherty at 5:41 PM