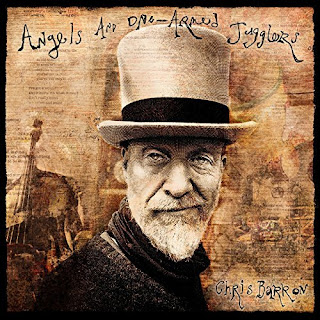 John Irving is one of my favorite writers (after William Shakespeare and Kurt Vonnegut, of course). Last year I reviewed an album by a band called Owen Meany’s Batting Stance, and it was the band’s name that got me interested. Likewise, it was a song titled “The World Accordion To Garp” that initially attracted me to Angels And One-Armed Jugglers, the new solo album by Spin Doctors lead singer Chris Barron. Plus, that’s a damn good album title (apparently, the album was originally going to be titled If I Stop Laughing, I’ll Cry). (Side note: I can’t believe it’s been twenty-three years since I saw Spin Doctors in concert.) The CD features all original music, written or co-written by Chris Barron, songs with some excellent lyrics. Lines like “Loneliness, it’s not the best party dress” and “There’s a saint in every crowd” and of course “I’m tired of songs about angels/I could use a punch in the face” stand out. Joining him on this release are Andrew Carillo on guitar, Jesse Murphy on bass, Shawn Pelton on drums, Rob Clores on keys, Erik Lawrence on saxophone, Steven Bernstein on trumpet, Jeff Nelson on tuba, Jonathan Dinklage on violin and viola, Anja Wood on cello, and Kevin Bents on accordion. Backing vocals are provided by Lindsay Nicole Chambers, Arne Houda and Erik Roe.

Chris Barron opens the album with its title track, which is one of my favorites. Ah, there is something attractive about songs populated by characters like these. “Angels and one-armed jugglers/Sword swallowers and smugglers/Good old Adelaide, she must be long gone/She once was a looker/And a hell of a hoofer/And we never stayed thirsty for long.” And this one has a wonderful sound, with some nice work on horns. There is a good late-night vibe to this song. Pour yourself a drink, sit back and let it take you on a little journey. “Angels And One-Armed Jugglers” is followed by “April And May,” which has more of a pop sound. “The vodka spreads her fingers and I am like a thumb/I can’t drink myself back to the place where May and April come.”

“Gonna (Need Someone)” is a mellower, more reflective song, an effective combination of folk and pop, and is another of my favorites (though I’m not sure why “Need Someone” is in parentheses in the title). Check out these lines, which begin the song: “On some other sunny day/When it used to be child’s play/You could get up and walk away from yourself/Now that the sun is gone/And the shadows are strange and long/You try and try to be strong, but it’s wrong.” Yeah, there are a lot of excellent lyrics in this batch of songs. These lines from “In A Cold Kind Of Way” always make me smile: “She’s as cold as ice/My friends think she’s nice/She could use a little blush/And of course her brains are mush.” I already mentioned my favorite lines from “Saving Grace” (the “punch in the face” lines), but I also really like these lines: “Well, if home is where the heart lies/And my heart is in your hands.”

The title of “Still A Beautiful World” carries a much-needed message in this completely screwed up time when a hideous, incestuous, mendacious creep sleeps in the White House. And the song is quite good. It begins as a sweet-sounding folk song, then develops into a cool pop song with horns. “It’s still a beautiful world/But we destroyed it long ago/Sha la-la, sha-la la-la la.” That’s followed by “The World Accordion To Garp,” the song that initially drew my interest. And it’s another of the album’s highlights, though the second line, “Boozy Susie on my arm,” reminds me of a different John Irving novel. And, yes, an accordion plays a strong role in this song. There is also a tuba, perhaps thanks to the line “The tuba has been drinking.” Check out these lines: “If you listen for her song/In your memory you can keep it/Even if you get it wrong/She plays it on your heartstrings/Starting just as it gets dark/On the world accordion to Garp.”

“Till The Cows Come Home” is a kind of sweet love tune that becomes a delicious jazzy late-night number. Yes, this is another of my favorites. “No matter where you go/You’ll never be alone/I will love you till the cows come home.” The CD then concludes with “Too Young To Fade,” a song about a friend. “His movie ended before they shot a couple of scenes.” When I come across lines like that, I always think of Ken Kesey’s sage advice to “always stay in your own movie.”