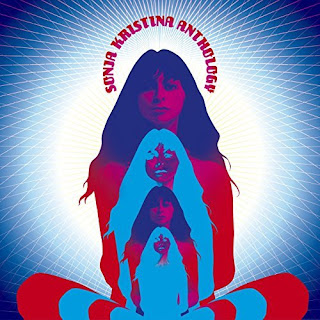 Sometimes a retrospective package on a particular artist will be released and after listening to it for a few minutes I can’t help but wonder how no one had turned me on to the artist before. Such is the case with the new Sonja Kristina two-disc set, Anthology. Sure, I’d heard her work with Curved Air, but somehow her solo recordings had escaped my attention. This two-disc set is absolutely fantastic. Most of the tracks are originals, written by Sonja Kristina, and originally released on her solo albums (there is one Curved Air track included). The collection includes liner notes written by Sonja Kristina.

The collection actually opens with a new track, a new recording of “Frank Mills.” My girlfriend and I were recently talking about covers of songs from Hair (we were listening to Three Dog Night’s rendition of “Easy To Be Hard,” which is what sparked the conversation), but I don’t recall ever hearing a cover of “Frank Mills.” What a delight it is to hear Sonja Kristina’s rendition. It’s such a goofy song, and Sonja delivers it with just the right tone. But of course, this isn’t the first time she did this song. She was in the first London cast of Hair in 1968, and performed this song then. It was included on the album, and was released as a single as well. So while this is one of the most recent recordings in this collection, it is also a return to one of Sonja’s earliest performances. (By the way, if you’re interested, there is some footage of Sonja rehearsing this song available online, and it’s pretty awesome. Apparently, it’s from a rehearsal for a 1968 television broadcast.)

“Frank Mills” is followed by “If This Was Love,” a pretty song from Songs From The Acid Folk. It begins with some nice work on strings. I am a sucker for cello and violin. The sound has something of a European café vibe, you know? Contributing to that vibe is Sonja’s work on accordion. But it is her vocal performance which is at the heart of this song. “I would begin again willingly/If this was love, if this was love/Let go of everything that I own/If this was love, if this was love.” She delivers another moving vocal performance in “The Passion,” a song from Alan Simon’s Excalibur IV: The Dark Age Of The Dragon (a new release in Simon’s ongoing Celtic rock opera).

I love the music to “Lullaby/Baby Song.” It has a light and joyous sound, and some sweet work on violin. There are some interesting changes, leading to a good and surprising percussion section. One of my personal favorites is “Man He Colour,” a track from her self-titled debut solo album. This is a very cool song with a wonderful, impressive, and interesting vocal performance from Sonja Kristina. I also really like the work on bass and guitar. The song has everything going for it, really, including a good groove. Sometimes I end up listening to this one several times before moving on to the next track.

Before I even heard “Melinda (More Or Less),” I appreciated it for its title (for reasons I won’t get into here). This is a track from Songs From The Acid Folk, and it features cello and violin, and some nice percussion. It is yet another unusual and intriguing track. The first disc concludes with a cover of Emerson, Lake & Palmer’s “C’est La Vie” (from the Greg Lake side of Works Volume 1). Like this disc’s version of “Frank Mills,” this is a new recording made specifically for this collection, and it’s a really good rendition.

The second disc gets off to an energetic start with a strange and wonderful tune titled “Devil May Care.” It’s folk, rock, country, with a psychedelic edge, and I totally love it. The strings are put to excellent use on this track. This is from Songs From The Acid Folk. “Getting nice and skinny/I think I’m looking good/Kind of pale and interesting/It must be like a food/You say I’ve got to cut it out/You shut me in my room.” That’s followed by another wonderful tune, “Anna,” also from Songs From The Acid Folk. This is one of my favorites, with such a positive sound. “Your mother just called me/She doesn’t know what to do with you/Let’s go check things out/There’s a good place I know/You’ve got to make the decision to get yourself well/Find out what brought you down the sweet road to hell.”

I can’t help but love “Rollercoaster.” This song is a total delight, with glorious and playful vocals, and a cool groove. These are the lines that open the song: “It wasn’t easy, but you made her change/You make her hungry, can you keep her sane.” And it just gets better from there. This one never fails to make me smile. If you’re looking for a fun tune to lift your spirits, I highly recommend checking out this song. Another surprising track is Sonja’s cover of Motorhead’s “I Don’t Believe A Word,” which was originally included on Sheep In Wolves’ Clothing, a tribute album released nearly a decade ago. Sonja’s version is haunting, and performed on acoustic guitars. I actually prefer this rendition to the original. She also delivers an interesting rendition of “O Fortuna” composed by Carl Orff. Her version was originally released as a single. Another of the second disc’s highlights is “Lovechild,” the one Curved Air song to be included in this collection, a song from 1973 (though not released until 1990). It’s fairly bloody awesome, with an excellent instrumental section.