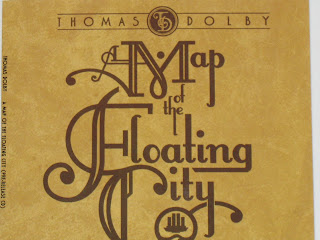 When one thinks of Thomas Dolby, one generally thinks of synthesizers and 1980s pop songs (especially "She Blinded Me With Science"). His newest album, A Map Of The Floating City, should change all of that. It's good enough that it should change the public's limited conception of him. (In fact, it's one of my favorite albums of the year.) Beside its being his first studio release in twenty years, this album is important in that it crosses over many musical boundaries. Thomas Dolby has never really allowed himself to be limited to any one type of music, and this wonderful CD explores a range of musical genres and forms.

He also tells excellent stories with many of the songs on this album. This CD is really about the vocals and lyrics, and connecting directly with the listener.

One thing that's surprising is how often this CD made me laugh (or at least smile). In telling his tales, Dolby uses a lot of great images, many of them humorous. Examples include lines like "Apathy on toast" from the opening track and "They ate Mars bars for love/They crashed the car for love" in "Road To Reno." And of course "The Toad Lickers," perhaps my favorite track, is quite funny.

This album is divided into three sections: "Urbanoia," "Amerikana" and "Oceanea." Each of the three has a distinct feel. The third section was released as an EP on March 28, 2011. All songs on this album were written by Thomas Dolby.

The opening line of the CD is "There is nothing new under the sun." But this is the first full-length studio album by Thomas Dolby in twenty years, and it's so original and varied that it definitely feels New. With a good steady beat and some inventive lyrics, "Nothing New Under The Sun" is a great opener. Check out these lines: "Panic on the seas/Mozzarella cheese/diplomatic deep freeze" and "Head without a spine/Why am I surprised to find you supine?" He takes these interesting rhymes, and then actually makes the song partially about writing them; he sings, "Hey, any fool can write a hit."

"Spice Train" is more what the casual Thomas Dolby listener might expect - an electronic tune with repeated synth rhythms. But what I love about this song is the vocals, and how they work with and in contrast to the electronic sounds. Is there such a thing as electronic folk? Has Thomas Dolby just invented it?

Here is a taste of the lyrics: "The Earth is like a garage sale/And I'm pitching my stall/To cater to the infidels/Now I'm shifting my shape/Morphing into Spider-Man/I'll tether my blimp wherever there's a party on/Because if you roll with it/You can ride this spice train/When it boils down to it/You can hold the world in the palm of your hand." A different edit of this song is included at the end of the CD.

"Jealous Thing Called Love" is a surprise. Every time I listen to this album, the beginning of this song makes me smile. It has an odd easy listening feel to it, like a version of Herb Albert and The Tijuana Brass that would be played in Sears. It might catch the listener off guard. That impression lasts only a moment. It's gone from the second his vocals come in, and this song is actually one of the best of the CD, and my favorite from the first section. I especially love the sound of the chorus in this song.

The section titled "Amerikana" is probably the most surprising. This might not be what folks expect from Thomas Dolby, and is actually my favorite of the three sections.

"Road To Reno" is a somewhat sweet (at least at first) and humorous love story, and has the bright feel of a folky pop tune. He introduces the couple with these lines: "He was a crooked politician/She sold brassieres at Sears/He said he like The Beatles/And she liked Tears For Fears."

The song suddenly takes a surprising turn. He sings, "And when all the love ran out he went out and bought a gun." Those lines, and the ones that follow, will grab you. And just when you think he's leaving you with that image, the song kicks back in again. It's jarring in the best way. I'm actually intrigued by this song, by what Dolby is able to accomplish, the way he affects the listener. We're smiling through most of it, and then he hits us with this detailed section of their demise, and then after a moment he makes us smile again. There is something wonderfully twisted about it.

"Road To Reno" features Geoff Grange on harmonica and Rich Armstrong on flugelhorn.

"The Toad Lickers" is a fun country folk tune with bluegrass elements and an attitude. He sings, "Forget your blues, forget your punk and funk and Christian rock and roll." After all, this is a "brand new mash of bluegrass and techno." Sure, but it's much more bluegrass than techno. And it features great vocals (Thomas Dolby has an excellent voice). Probably my favorite tune on this release, "The Toad Lickers" is another song infused with humor. Check out lines like "ID the species by their feces in the free mountain air." I love the keyboard section. This song features a guest appearance by Imogen Heap on jaw harp.

Mark Knopfler plays guitar on "17 Hills," an amazing song that really takes the listener on a journey. That song also features Natalie MacMaster on fiddle. And I love Jeffrey Wash's work on bass.

"Love Is A Loaded Pistol" has the great feel of a piano standard played in a jazz bar late at night. And again, it features some wonderful vocal work and excellent lyrics. I love the change the song takes partway through these lines (right after "This time it's love"): "On a creaky piano stool tonight/As the moon is my only witness/She was breathing in my ear/'This time it's love'/But love is a loaded pistol/And by daybreak she's gone."

Three of the songs from this section were made available as a downloadable EP titled Amerikana in 2010.

The final section of A Map Of The Floating City is titled "Oceanea." And it's this section that was released as an EP earlier this year (please click here for my review of it).

Thomas Dolby recorded this album at a studio built on an old lifeboat, which adds another layer of meaning to this section.

My favorite from this section is "To The Lifeboats," which is a phenomenal song. It really struck me when I first heard the EP, and its power has not diminished at all, but rather grown with repeated playing. I really like the percussion in this song. And as with all of the songs on this CD, there are some wonderful lyrics, like these: "The superstitious sailors of old refused to learn to swim/But there's no need to drown these days/Because we've got lifeboats/Where are the lifeboats?/There are no lifeboats."

A Map Of The Floating City is scheduled to be released on October 25, 2011 on Lost Toy People Records. Let's hope that this is the first of many new releases from Thomas Dolby.
Posted by Michael Doherty at 1:37 PM