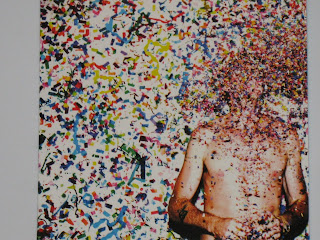 Finding Fiction is a Brooklyn-based band that was formed in 2008 by Mario Santana and Tim Farr. The band has had several members in its brief history, and its newest CD, Try This At Home, is actually a solo album. Mario Santana does all of the vocals and instruments on this release.

I was fortunate enough to catch a show during Finding Fiction's recent tour. They did a set at Trip down in Santa Monica on September 22nd. The band's new keyboardist, George Chen, was unable to make the west coast leg of the tour, so the band's road manager/photographer Crystal Parker sat in on keys for those shows (she is working on her own solo material now, and should have something ready for release next year). The lineup that night was Mario Santana on vocals and guitar, Aaron Latos on drums, Luke Dennis on bass and Crystal Parker on keyboards. This is a fairly new lineup for the band, and this tour was the first time they all played together, but they sounded incredible. They performed a few songs from this CD, including "Weathermen."

Try This At Home is a 5-song EP containing just under a half hour of music. Their music was described to me as power pop meets arthouse, and that's an apt description. But some inspiration seems to be taken from the jam band world as well. It's odd to think of an album having jam elements when the instruments were all played by one person. It's not like Mario can jam with himself. Yet this EP does have an exploratory feel at various moments within the songs (perhaps like something by Sound Tribe Sector 9). Listening to this album you'd never guess that it was performed by just one person. It has such a full, and at times intricate, sound that it seems several minds had to be working in conjunction to create it.

The EP's opening track, "Migraines And Sheep," starts with keyboard and right away I'm on board. This song has a sort of joyous full sound - the glorious side of pop. Later there is a quieter section with guitar and keyboard and vocals, something Mario likes to do with a lot of his material. Then the thump of the kick drum comes in, leading back into a more full-sounding section.

"Migraines And Sheep" is my favorite track from this release. It's a fantastic song that I enjoy more each time I listen to it. Here is a taste of the lyrics: "I'd count every minute in between/a million migraines and sheep/to feel your fingertips through this screen/through this screen/or is my machine becoming more like me."

"Panic Rooms" has a driving pulse to it. It feels a bit harder than the opening track, and a bit more on the electronic side. The image "crowded rooms with walls that move" later turns to "panic rooms with walls that move," which is interesting because you might imagine a panic room as being a room that you alone occupy, at least until the danger has passed (so in contrast to a crowded room - though I know some folks who panic in crowds). I really like the vocals on this track (and on all of them, actually). Three minutes in, there is an electronic interlude; then the vocals and guitar come in and the song slowly builds again.

"Weathermen" is a song the band played when I saw them in Santa Monica, and it was one from their set that really stuck out for me (the line "I swear the weatherman's got it in for me" was in my head for several days after the show). This song has a dense structure - with some good work on percussion.

Approximately two and a half minutes in, there is a section of electronic industrial-type sounds, like something is truly being manufactured during the song. That leads to the repeated lines "I swear the weatherman's got it in for me" and "I haven't seen the sun in weeks." I love the build after that, again heavy on percussion, and the breakthrough it leads to. There is some nice stuff on guitar at that point. The song ends with a sweet-sounding "la la la."

"Dear Daylight" has an odd beginning, with electronic sounds and then the pound of a drum. These songs certainly are not shy or timid; they don't creep up on you. "Dear Daylight" is a vibrant collection of sounds that create this bright force. It sort of begins to unravel or deconstruct approximately four minutes in, but quickly comes together again. I really dig these lines: "daylight you're just a disguise/put on/put on/by the night."

"Paper Planes" is an interesting way to end the EP, with the lines "till the voices in our heads/go out the way they came in." For Mario's is the voice in my head. A voice that is backed by wonderful percussion on this one. At times this song feels relentless, insistent - like it could explode at any moment under the pressure of its own force. This song, like the others, breaks down at moments, but then comes back in just as strong as before.

I'm especially fond of the repeated line "friends in quotation marks," which seems to have more poignancy in these days of online social networks.