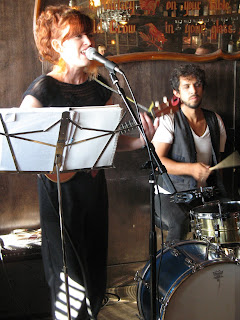 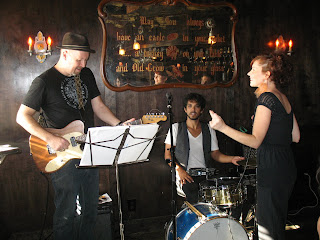 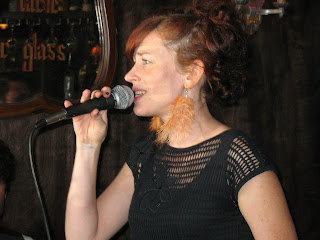 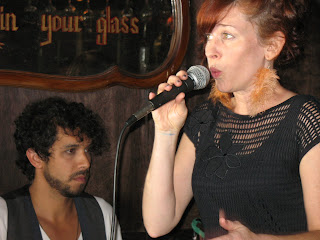 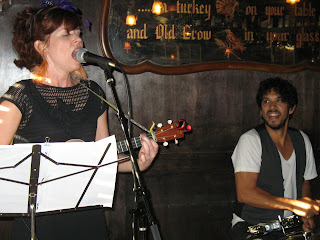 Holland Greco did a special set at the Thirsty Crow in Silver Lake yesterday afternoon to celebrate her birthday, which was actually the 14th (she shares her birthday with Thomas Dolby). Holland Greco used to have a residency at that venue, and when she stopped, Princess Frank (Holland's drummer) took over, playing every Sunday. He does a cool one-man band thing, and started the show yesterday, playing originals and as well as covers like "Sunny Afternoon," "Ring Of Fire," and "Help." The crowd sang along on several songs. He ended with "Money (That's What I Want)" as the tip jar was passed around.

After a short break, Holland began her set. Bass player Michael Papillo wasn't able to make the show, so it was a return to the duo of Holland and Princess Frank. They started their set with three tunes they've been playing since their days as Heartkour: "100 Proof," "Stuck" and "Flashback." Then Scrote joined them on guitar for a fun cover of Little River Band's "Reminiscing" and then a wonderful new song titled "Irene Sylvia." Holland wrote the lyrics, and Scrote wrote the music for this one. What if the Grim Reaper were a woman, and you fell in love with her? What would you do for her? A perfect song for this Halloween month. The three then did another cover, Bobby Hebb's "Sunny."

Scrote then left the stage, and Holland and Princess Frank wrapped up the set with three Misfits songs, clearly celebrating Halloween as well as her birthday. "Vampira" is one they've performed many times, but the others were new - "Last Caress" and "Halloween."