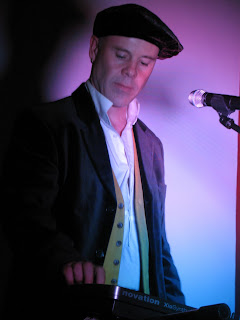 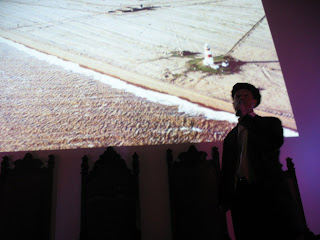 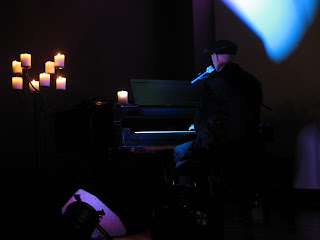 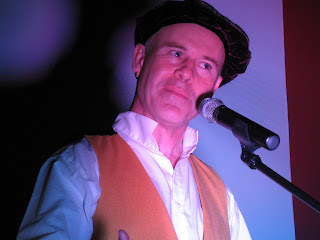 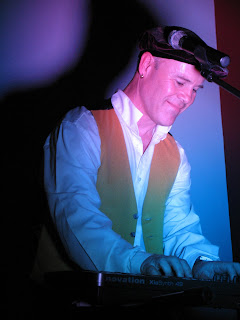 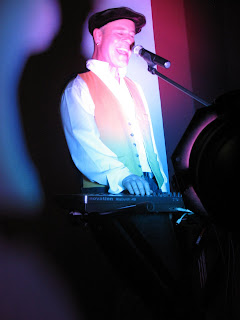 Because of how good Thomas Dolby's new album is, I had incredibly high expectations going into this concert. But I also knew there was a lecture involved and that it had something to do with his online game, which I hadn't played, so I wasn't sure how it would all play out. Would he talk for a while, then play a few songs? Would there be a band? Also, I had never been to this venue before, so I wasn't sure how sound would be. But Thomas Dolby at a Masonic Temple? In a cemetery? Just before Halloween? It sounded too strange and wonderful to miss.

At a little after 8 p.m., the doors were opened and we went inside. But the door to the actual concert hall didn't open for another half hour. Most people hung out in the room with the bar and merchandise table (his new CD was available for sale early to the folks who attended this show; it's not going to be in stores until the 25th). And a long line began to form. Finally a little after 8:30 we were let in. I went right to the front row, center. The stage had a piano at one end (stage right) and a keyboard at the other (stage left). Candles were lit and placed around both instruments. And that was it. No band. And no nonsense. It was going to be Thomas Dolby solo. And it was his birthday.

When he took the stage at 9:12 p.m. he thanked the crowd for being at his birthday show, and then stood at the keyboard and played "Europa And The Pirate Twins" from his 1982 release, The Golden Age Of Wireless. (The announcement asking for folks to refrain from using flash photography was immediately ignored by several members of the audience - then and occasionally throughout the show.) He got the audience clapping along on the very first song. It was strange listening to him play harmonica on the keyboard. I'm used to seeing a harmonica when I hear one. The sound, by the way, was excellent - it was completely clear.

After that opening number, he talked about how he used to live right up the street from the venue, on Whitley Ave. He then began a slide show presentation on the wall at center stage. He talked about the studio where he recorded his new album, A Map Of The Floating City - a studio built on a lifeboat. He joked that he'd be ready "when the flood waters came."

This led to his second song, and the first of the night from his new CD, "To The Lifeboats." This song was released in March on the EP Oceanea, and it's my favorite from the EP (and one of my favorites from the full-length release). For this song, Thomas Dolby sat at the piano. He had only one microphone, so he had to carry it over to the piano. This was a beautiful rendition of "To The Lifeboats." He said he'd written it for guitar, but it sounded wonderful on piano.

From there, he went back to the slide show presentation, so it was clear that the lecture and the music were to be combined throughout the performance. He talked more about his studio, which has solar panels and is completely self-sufficient. It uses renewable energy, stored in batteries.

He told the tale of a dream he had in which he was visited by Billie Holiday. In the dream, she told him, "I have a song for you: 'This Time It's Love.'" So when he woke he wrote "Love Is A Loaded Pistol," which incorporates that line and the titles of other Billie Holiday songs. He performed this one on piano.

From his lifeboat, he can see boats going by, and he noticed that sometimes they looked like the Manhattan skyline. He segued into the idea of the online game, The Floating City, first introducing the basic concepts, and then for most of the rest of the performance taking the audience through the entire game, which had recently wrapped up. I have to be honest: video games and online games don't really interest me. I've never played any of the online games. That being said, I was completely intrigued by the incredible detail of Thomas Dolby's creation, and by the fact that players were adding as much to the game as he himself added. That everyone who played was in a sense its author.

The game takes place in a possible near future when things have gone horribly wrong, and the only place cool enough to live is the north pole. Players form tribes to survive and make their way there. There are three continents: Urbanoia, Amerikana and Oceanea (the three sections of the CD). The players were divided into nine tribes. One of the tribes was called "17 Hills" (the title of one of his new compositions as well), and when he mentioned that one, it got a large cheer from the audience. Clearly a good portion of the crowd at this show had been involved in the game. The tribe "17 Hills" was essentially the local tribe.

The whole idea of the game was fascinating - the way it played out, the way it brought together people from all over the world. Thomas Dolby involved members of his family too, and they took on various characters that players would encounter. This was a game that took place in chat rooms and forums as well as on the official site.

When I first entered the venue and saw only the piano and keyboard, I figured there was little chance of seeing him perform "The Toad Lickers," my favorite track off of A Map Of The Floating City. Because that song is really a bluegrass tune, with several guest musicians playing fiddle, accordion and the jaw harp (that's Imogen Heap on the jaw harp), and some backing vocalists as well. But Thomas Dolby began introducing the song, playing different folks' contributions on the keyboard, and even playing a video of Imogen Heap recording her portion. And then he performed the song on keyboard, and it was great. Though it's still odd to hear a song fade out when seeing it performed live. It reminds me of certain episodes of The Monkees, when they were supposedly playing at a party or a venue and then the song would fade out as it did on the album.

After performing "Spice Train," the album's single, Thomas Dolby brought everyone up to date with the end of the game, and said that the players have sort of demanded that it keep going. So he's leaving it up to them to continue it if they wish. As I've said, I've never been interested in online gaming. But after hearing Thomas Dolby talk about it, I'm a little sad I missed out on this one. He gave me an appreciation for what goes into these games, as well as what people get out of them. If the game does continue, I might look into it further.

He then finished his set by playing "She Blinded Me With Science," the song he is still most well known for. And I have to admit, it was a total thrill to see him sing it.

A standing ovation brought him back on stage, though he joked that a lecture isn't supposed to have an encore. That's one thing about him that this performance really showcased - his sense of humor. You can hear it in a lot of his songs, in particular rhymes and phrases. But hearing him speak at length you really get a sense that this is a seriously funny (and incredibly intelligent) individual.

People shouted out requests for a lot of songs, and the one that Dolby chose was "Hyperactive!," a hit from his 1984 release, The Flat Earth.

The show ended at 10:45 p.m. A little while after the show Thomas Dolby came out to sign posters and copies of his new CD for the long line of fans. For those who missed this performance and live in Los Angeles, he will be doing another show at the Grammy Museum on Monday, October 17th.
Posted by Michael Doherty at 4:01 PM