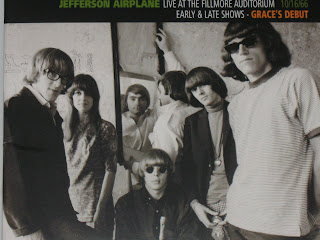 I just posted a review of one of the new Jefferson Airplane CDs. I had planned to review them in chronological order, and i did start by listening to Signe Anderson's last show (which is great, of course). But today i got really caught up in Grace Slick's first show with the band (which was the very next night). And so i ended up finishing that review first.

All four live Jefferson Airplane CDs are scheduled to be released on October 26, 2010. There are hints of more live recordings from this band being unearthed. So let's just hope that these first four sell well enough that Collectors' Choice Music decides to release another batch.
Posted by Michael Doherty at 12:23 AM