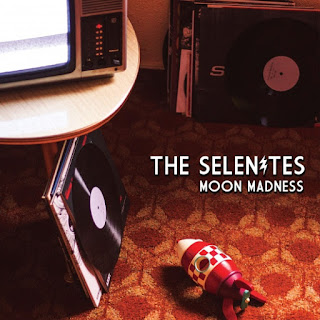 The Selenites are a group from Austria offering some delicious rock and roll and rockabilly music. Their debut album, appropriately titled Moon Madness (more on that in a moment), contains all original material written by the band members. The band is made up of Paul Hangler on double bass and backing vocals, Sebastian Pichler on lead vocals and guitar, and Thomas Berndl on drums and percussion. So, about the album’s title: In the 1980s, an animated movie called Le Secret Des Sélénites was released in France, its plot loosely based on the Baron Munchausen story. The Selenites themselves in the film are people living on the moon, and in the United States, the movie bore the title Moon Madness. So there you go. And the secret they supposedly have is the key to eternal life. Listening to the music on this album, I get the feeling that is why the name was chosen. This music has an eternally youthful energy and vibe. Could this music stop us from aging? Perhaps, perhaps.

The album gets off to a great start with “Howl Of The Wolf,” its rockabilly beat being just what I need to put a smile on my face and a dance in my step. “Am I still alive, or sleeping deep/Or is it just a little trick/That makes me feel that I am going insane.” Oh, we are all going a little mad these days, and that howl you hear could be from any of us. “Does not matter what I do, does not matter what I do.” I love that lead on guitar toward the end. That’s followed by “Some Say.” When this one opens, it has a slower groove, and Sebastian sings “Some say that I’m a dreamer.” But before you can get used to that style, the song kicks in as he starts the second line, “Some say I lost my mind.” And it has a loose, rockin’ sound, but with a cheerful vibe. “Some say that life’s too short/To waste it all with you.” Oh, those voices. Who are these people saying so much about other people? Well, before too long, he has made up his mind about these people, telling them “I don’t need your advice/Well, I just made my decision/For my girl, my love, my life.” Then in “Keep It Up,” there are moments where the vocal performance reminds me of Buddy Holly. Not a bad thing, of course. This is another fun, youthful track.

“Little Lovin’ You” has a cool and wilder style that I love, with a groovy beat at the beginning and more of a garage sound when it kicks in. The vocals take on a different tone at that point as well, and there is a hint of punk too. “Please give me one more chance and I’ll be true.” There is some excellent work on guitar in the second half of the track. This is one of my favorites, and it is followed by another favorite, “Do You Really Want Me.” From the moment it begins, this track is a total joy and a whole lot of fun, a song for those of us on the poorer side. “Why do I have those bad dreams all the day through?” is an interesting line. I guess he is unemployed, if he’s sleeping all the day through. A lot of us are there, eh? These lines also strike me: “Well, now I’m out of cash/And I feel a little depressed/Honey, please come comfort me/I need you because I’m stressed.” Yup, I think most of us can relate to those lines. I love the energy of this song. And then check out that delicious lead on bass. Hell, this track just gets better and better.

“Not That Bad At All” comes thumping in to knock us off our chairs and get us dancing. And on top of that, it offers us these optimistic thoughts: “Well, you know that the times are not that bad at all” and “A new day starts tomorrow there after all.” This is a wonderful rock and roll song. That’s followed by “All You Freaks,” in which they sing “We got beer and we got wine/So you see it’s gonna be fine.” I can accept that logic. This one has an unbridled energy, particularly in the vocals on the chorus. They tell us things are going to be rocking, and then they prove their words to be true. “So come on, boys, we’re going to have some fun.” You’re going to want to turn this one up, and then toss yourself around the room. “Come on, all you freaks.” Yes, we are ready. Then “Gold Diggin’ Girl” is a somewhat goofy song about a girl who is just after money. Well, money and a little sadistic fun: “All you wanted was to break my heart/And then cut my throat.” That’s followed by “Get Back Home,” a song that comes on strong, with a beat that won’t be denied, that won’t be slowed. At the end, he repeats “Well, I just want to get back home.” I understand that feeling, but traveling is terrifying at the moment.

Well, from the title “Barnacle Boy And Mermaid Man” I knew this one would be silly. I mean, first of all, “Mermaid Man”? That makes no sense whatsoever. It would be “Merman.” But we won’t dwell on that, for, as expected, the song is fun and silly, and it is named after characters on a children’s animated television series. “Well, who is going to save us again/It’s Barnacle Boy and Mermaid Man.” Then “I’m Alive” is a good, solid rock song about not taking any shit. “I’m alive, and I’m not giving it up.” Sing – or shout – along to this one. The album concludes with its title track, “Moon Madness,” its first lines being “When I’m walking home from the moon/I get a feeling that gravity gets me soon.” I love that image of someone walking home from the moon. “Please get me home where I belong.” This track has a delicious beat, and a proper rock and roll ending. So there.

CD Track List
Moon Madness is scheduled to be released on August 14, 2020 through Hicktown Records.
Posted by Michael Doherty at 8:04 AM