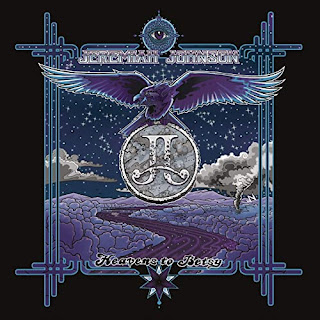 How could you possibly dislike an album titled Heavens To Betsy? Seriously. That expression brings a smile to my face, and if an artist chooses a title like that, he or she is going to have to deliver. Right? Well, Jeremiah Johnson certainly does on his new album, Heavens To Betsy (I am going to include that title as often as possible in this review), which follows his 2018 release, Straitjacket, and features mostly original material. The music is blues, but with a good amount of rock in its delivery. Joining the vocalist and guitarist on Heavens To Betsy are Frank Bauer on saxophone and backing vocals, Tony Anthonis on bass, Benet Schaeffer on drums, Rick Steff on keys, Tony Antonelli on percussion and backing vocals, and Pete Matthews on backing vocals.

Heavens To Betsy opens with “White Lightning,” which begins with a southern rock flavor, and is a song about one way of dealing with common struggles. “‘Cause in late December, when you start to remember/That the world gets cold again/In the back of your mind, in the dark of the night/You know you need a real good friend/White lightning.” I love that work on saxophone, and this track features a delicious lead on electric guitar as well. That’s followed by “Tornado,” a rock song complete with backing vocals shouting out the song’s title, and featuring some great work on electric guitar, particularly that lead toward the end. “You didn’t heed the warning/You’re going to take your chances/Now she’s on you like a shadow/With the sirens blasting/Here she comes/Here she comes/She’s a hot cup of coffee on a bumpy road.” I love that line, “She’s a hot cup of coffee on a bumpy road.”

“Soul Crush” has a heavy sound, and one of those slow steady grooves that make you nod your head in time. And of course it features more cool work on guitar. Then “Ecstasy” has a sweeter sound, especially in the vocal delivery. And that smooth work on saxophone is so good, and is raising my spirits. “You’re my world, my ocean, my sea/I’ve got something for you, you’ve got something for me.” Perhaps it’s partly my mood, but this song is seriously working for me. And I dig that bass line. That’s followed by “Forever And A Day,” another fun, rocking number.

As “American Steel” begins, it reminds me of certain funky rock numbers from the 1970s, and so right away I’m totally on board. It is a whole lot of fun, and has a seriously cool bass line along with some great work on guitar, making it one of my personal favorite tracks on Heavens To Betsy. Plus, it features some great touches on saxophone. This is one to add to my road trip play list. Listening to this song, I just want to get out on some long, straight highway where the speed limit is simply a suggestion, if posted at all, and the tank is full. If you are hitting the road this summer, take this song with you. It’s followed by another of Heavens To Betsy’s highlights, “Showdown,” a positive number with a delicious groove and a chorus that seems just about right for these times. “We’re heading for a showdown/Hey, we’re going to throw down/Ain’t gonna slow down/‘Til we make things right.” Oh yes. And there is so much that needs to be made right.

“Leo Stone” is an optimistic and cheerful number about becoming a father. “And I don’t want to be afraid/I got to stand tall for you every day.” There is a bit of a country flavor to this one. That’s followed by “Castles In The Air,” a rock song with a great driving beat, another of the disc’s highlights. Then “Long Way Home” has a mellower, prettier sound, and is a moving and effective song. “If you can take love from sacrifice/And wash away the pain and loneliness/If I could have those last three minutes again.” That is followed by the only cover on Heavens To Betsy, a cool, lively rendition of “Born Under A Bad Sign,” a song I first heard on a Cream cassette I bought when I was a kid. This rendition features some great touches on saxophone, more energetic work on guitar, and also some cool percussion. Heavens To Betsy then concludes with “Preacher’s Daughter,” a fun, fast-paced rock and roll number. This track is a total delight. I love the backing vocals echoing “I saw the light.” This is a playful number, and includes some vocal riffing at the end.

CD Track List
Heavens To Betsy was released on February 14, 2020 on Ruf Records.
Posted by Michael Doherty at 8:56 AM