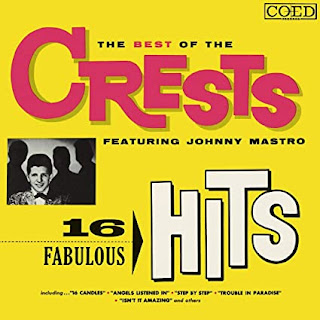 In these days of racism and division and fear, what a treat it is to momentarily escape and listen to one of the early integrated doo-wop vocal groups, The Crests. The group was formed in New York and first signed to Joyce Records, releasing two singles on that label. It was when that label folded that the group began recording for the new label Coed. Omnivore Recordings is celebrating the music put out on the Coed Records label, with the release of several collections, including a re-issue of The Best Of The Crests Featuring Johnny Mastro: 16 Fabulous Hits, which was originally released in the early 1960s. Even if you might be unfamiliar with the name, you know this band’s songs, and the title “16 Fabulous Hits” is no exaggeration. These songs are fabulous. This collection includes liner notes by Bill Dahl, telling some of the story of this group.

The collection opens with the group’s most beloved and popular song, “16 Candles,” written by Luther Dixon and Allyson Khent. It is a sweet song, with an appealing innocence and a strong lead vocal performance. This song was released in 1958, and was featured in the 1973 film American Graffiti. It is followed by “A Year Ago,” a wonderfully fun song, also about a sixteen-year-old, and actually including the phrase “sixteen candles” in its lyrics. But it takes that sixteenth birthday and looks into the future of the relationship, as they promise to stay together, singing “That I’d be saying happy birthday your whole life through” and “And told you I’d be yours throughout the years.” And they have stayed together. Well, at least for a year. That’s as far as the song takes the relationship. “True love was born a year ago tonight.” Hey, a year is a long time when you’re a teenager. This song was written by Allyson Khent and Billy Dawn Smith.

“Six Nights A Week” is a sweet love song. “I love you so/But I’m a fool, it seems/Because six nights a week/I see you only in my dreams.” He wants to spend the whole week with her, but she only sees him at the Saturday night dances. Remember those? I don’t often wish to return to my teen years, but I do have fond memories of those dances – the music, the excitement, the innocence. But maybe what I can do is just play songs like this on Saturday, and dance with my girlfriend in the kitchen or something. That actually sounds even better. I think she’ll go for it. That’s followed by “Angels Listened In,” another song of love. Hey, whose prayers are being answered these days? I don’t know. But this is a song wherein one young man’s prayer is heard and answered, and isn’t that wonderful? “They gave me the whole wide world/Wrapped up in one little girl/My darling, when the angels sent you.” Apparently this song was used in John Waters’ Mondo Trasho, but that is the one John Waters movie I haven’t seen.

How simple the world is in some of these songs, like in “Gee (But I’d Give The World),” when all that is needed is the attention of that one special person to make everything perfect. And, hell, maybe that is still the case, and we’re just being sidetracked by all sorts of insanity, when really all we need is one person’s love. I love the way this song builds toward its conclusion. Then “Step By Step” is a fun number, with the backing vocalists singing “Step, step” and then counting off the steps. I also like the percussion. “Step by step, I fell in love with you/And step by step, it wasn’t hard to do.” The world of this music is the world I want to live in. What a joy it is to visit this place. “Step By Step” is followed by “I Thank The Moon,” which is one of my personal favorites. I love that relaxed groove, and the vocal work, including all the backing vocals, is just wonderful. “It’s true what they say/That when the moon’s in sight/It casts a magic light on lovers.” Ah yes, we know that to be true. This fantastic song was written by Billy Dawn Smith.

Perhaps it is those bells, but “Pretty Little Angel” feels like a celebration, leading to bliss, to a wedding. In these songs, love is all-powerful, and you get the feeling as they sing “So don’t ever leave me, please don’t make me blue,” that that will never happen. Love is eternal here; it never turns to crap. And we hear that in the opening lines of the next song, “Journey Of Love,” “From a teenage crush to life’s greatest thrill/From a crazy dream to the plans we’ll fulfill/From the high school dance to the church on the hill.” Here life is a journey of love, as it should be. And if your love story didn’t start in a study hall, don’t worry, it’s not too late. Find that someone special and hold onto her or him. “From the Coke that we shared to our sharing a home/From a couple of kids to some kids of our own/I’m going to take you on a journey of love.” Then yes, in “Trouble In Paradise,” the all-powerful love seems to be struggling. The song begins with a prayer of sorts, “Calling all angels, calling all angels, calling all angels.” But still there is the sense that everything is going to be all right, particularly as they sing, “Mr. Moon, Mr. Sun/Tell her she’s the only one/Guide her with your lovely light/Back into my arms tonight.” The idea here is that the angels are rooting for the love affair, wanting to take our side in our affairs. “And heaven’s not the same/The angels sit and cry/They say it’s such a shame/They’d like our love to be just like before.” That’s followed by an angel of another sort, “Earth Angel,” a song originally recorded by The Penguins. The appeal of this song is just as strong as ever, and the Crests’ rendition features an excellent vocal performance.

Okay, “Flower Of Love” is goofy. But how can you dislike it? It’s about a fickle girl, and a boy who is trying to find the answer about her feelings by picking petals from a flower. I don’t think anyone tries to get information that way anymore, like those little paper contraptions we made as children, where you’d choose one side and lift it to discover your fortune. That’s followed by “Always You,” which begins at a fast pace before settling somewhat as the lead vocals come in. This is one I wasn’t as familiar with, and is another love song. I’ve said that all songs are drinking songs if you listen to them correctly, but could it also be true that all songs are love songs? “You are my love forevermore/It’s only you that I adore.” “Always You” is followed by “If My Heart Could Write A Letter.” Sometimes it’s difficult to express ourselves, to say just what is in our hearts, but if our hearts could compose the damn letter, well then, we’d be fine. I love the piano work in “Molly Mae,” a pretty song. When he sings the line “The picture we took together before I went away,” there is a long enough pause before the word “away” that my brain filled in the word “insane.” That would have been a much different song, I suppose. This disc wraps up with “Isn’t It Amazing,” a song about love and how incredible it is. A good song to conclude this collection, don’t you think?

CD Track List
The Best Of The Crests Featuring Johnny Mastro: 16 Fabulous Hits is scheduled to be released on September 11, 2020 through Omnivore Recordings.
Posted by Michael Doherty at 8:14 AM