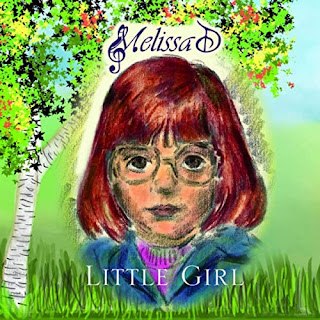 The pandemic has affected everyone to varying degrees, and has left many people unemployed, particularly gig workers. Musicians have clearly been put in a tough position, with tours canceled, leaving them without their regular means of getting an income, and unable to promote new albums. And in some cases, albums that were planned have been put on hold. Vermont-based singer and songwriter Melissa D was in the process of recording what would have been her debut full-length solo album. When that was stopped, she decided to release the songs that were ready, the results being Little Girl, a five-track EP. The songs here are all originals, written by Melissa D. Moorhouse.

The EP opens with “Belly & Boots,” a sweet, kind of adorable song featuring Phil Henry on mandolin (and several other instruments), and some nice work by Jimmy Kalb on fiddle. It is a song about being grateful for spring, grateful for change, even if a bit of discomfort comes with that change. In the song, it is the mud of spring that gets on your boots and on your dog’s belly, and ends up tracked into your home. The line “Brings me more joy than plain M&Ms” tickles me every time I listen to this track. I love plain M&Ms (years ago I used to eat a pound bag of them almost daily; now they don’t even make pound bags anymore). And though we are past spring – at least in a literal sense – we are all looking forward to some serious change in this country, and I think this song should hold plenty of appeal. That’s followed by the EP’s title track, “Little Girl,” which has a more serious, somber sound.  “Little girl, don’t give up the fight/Don’t believe a word that they say/Don’t you know it’s going to be okay.” The song offers advice and comfort to a young woman (perhaps her younger self), hoping to empower her. “I know your heart is filled with shame/Don’t you know you’re not the one to blame/You’ll grow up strong, you will belong, you’ll prove them wrong.” This song feels vital, and it features a really good lead on guitar in the second half. That’s Matt Steady on lead guitar. Phil Henry plays guitar, bass, piano, organ and glockenspiel on this track.

“Sunglasses In The Rain” has a country pop flavor, and is about meeting a man who is probably not right for her, a man who has an inexplicable quirk, “He wore sunglasses in the rain.” There is a youthful energy to this song, which is fitting for the characters. Also, this song mentions Cumberland Farms, making me miss New England. There are no Cumberland Farms here in Los Angeles (though we do now have Dunkin’ Donuts). Then “Letting Go” eases in and develops a rather striking sound. And as Melissa’s vocals come in, she tells us, “The time has come for letting go/Of the life I had once lived and come to know.” Jimmy Kalb plays fiddle on this track, and Phil Henry is on guitar. “Easier to be ignorant and have no proof” is a good line. The EP’s final track, “I’ll Remember You,” opens with the line “You won’t be forgotten,” touching on a fear many folks have at some point or other. Though it’s about loss, this song has a bright, hopeful and comforting sound. And though it’s about a pet, it connects to us on an important level, reminding us how life is so short. “Ten years by my side, my soulmate and my guide/You’ll be here, even though you will be gone/Tucked up in my heart where you live on.” Let’s try to take care of each other a bit, and make life a little easier for one another.