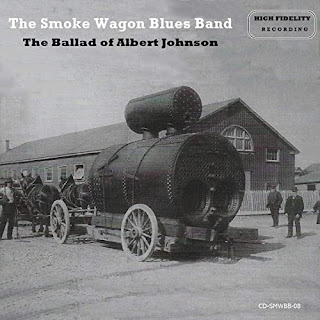 The Smoke Wagon Blues Band delivers some great original blues material, featuring strong rhythms, some powerful work on harmonica, delicious stuff on saxophone and keys, and wonderfully raw vocals. The band is based in Hamilton, Ontario, and the title of their new album, The Ballad Of Albert Johnson, refers to a trapper up in Canada, a wild character known as The Mad Trapper who became a fugitive in the early 1930s. And it is with the title track that this album gets going, telling a story that includes dynamite, dogs and hiding tracks within the tracks of caribou. It is a crazy story about a crazy person, and the song has the energy to match. “Ballad Of Albert Johnson” has a good blues rhythm and great raw vocals, but the saxophone is what makes me dig this track. And then that fiery, powerful blowing on harmonica really drives things forward, and for a time the track becomes a good little jam. The band, by the way, is made up of Corey Lueck on vocals and harmonica; Mike Stubbs on guitar and backing vocals; Brandon Bruce on organ, piano and backing vocals; Gordon Aeichele on saxophone, flute and washboard; Steve Sherman on guitar, percussion and backing vocals; Jason Colavecchia on bass and backing vocals; and Tibor Lukacs on drums and backing vocals.

“The Ballad Of Albert Johnson” is followed by “Memphis Soul.” The bass opens this one, and for a moment I am reminded of that cool theme to Barney Miller. Then the song kicks in to become a groovy number, with more good work on saxophone. “The horns are blowing with the blues on Beale.” Indeed! There is a certain amount of joy in the delivery of this one. And I particularly like that nice lead on organ over that delicious and funky groove. Yeah, this one might get you on your feet. Then things get soulful with “Ain’t Gonna Be Your Fool,” in which we hear, “But I ain’t gonna be, I ain’t gonna be your fool this time.” Oh, we’ve all made those sorts of promises to ourselves, haven’t we? But in this case it sounds like he’ll be true to his word to himself. “You said you’ve tried, but don’t love me no more/Tore my heart from my very soul/But now you’re all alone/And feeling down/But I ain’t gonna be, I ain’t gonna be your fool this time.” I love those touches on saxophone, giving the song more of a timeless quality. But probably my favorite part of this track is that lead on keys, a sound that gives me hope and makes me feel we’ll all come through our troubles, a little worn, sure, but standing.

The Smoke Wagon Blues Band takes us down to New Orleans with a fun rendition of Fats Domino’s “The Fat Man,” the piano in particular having a lively, excited quality. This is the album’s only cover. The band keeps us in that New Orleans frame of mind with “Lay Say Lay,” a totally fun tune featuring yet more wonderful work on keys and delightful stuff on saxophone. I just want to live in the world of this song for a while, but all too soon it is over, and with a cha-cha-cha ending. That’s followed by “Mescaline,” which begins with some cool work on keys, and things get both jazzy and bluesy, the vocals deep and rough and warm over that wonderful groove. Then it rises to a new level. “Feels like the whole world is a circus/Feels like I’m walking on the moon.” No argument from me, and that’s without the help of hallucinogens. I love that bass line. This track also features a good lead on flute, helping to make it yet another of the disc’s highlights. “Sacrifice” is a fun, funky, lively number with a terrific beat. I am seriously digging that work on drums. And then in the second half, we get a cool bass solo.

How many blues songs start with the line “Woke up this morning”? I don’t know. A lot, anyway. You can add “Poor Man Blues” to the list. This song has a delicious groove, and features lyrics that I’m sure a lot of folks can relate to. I like these lines: “They done sent my job to China/The trickle down is running late.” This track includes some enjoyable and excellent work on harmonica, and it is during that lead that things really start moving. That’s followed by “Matapedia River Blues,” a slower, soulful number taking place is an area of Quebec. “On a dark stretch of highway/Your moon shines so bright.” The band then delivers another soulful, pensive number, “A Song For Cheryl,” featuring a passionate and moving vocal performance. And its repeated question “When I need to tell somebody, who will I call?” has a beautifully sad ring. This one also mentions the Matapedia River.

“Can’t Take The Blues” is a fun song about divorce, describing a woman who was great until they were married, when she then turned “nasty and mean.” I like these lines: “It was happy hour ‘til I said ‘I do’/Then she broke me like a wrecking crew.” Well, as the band says, “You can take everything, but you can’t take the blues from me.” The band then dips into country territory with “On The Road Again,” a song about drinking. “And I’ve been thinking, what happens next?/And I’ll be raiding the kitchen until the morning comes/And I’ll be back on the road again.” This track is a delight, particularly with the backing vocals echoing “On the road again.” Then nearly halfway through, the song turns a corner and becomes a jazzy number, featuring wonderful stuff on piano, bass and drums, and then a nice saxophone lead. This one is a surprising highlight. The album then concludes with a live track, “Steaming Comrades Harp Boogie,” recorded at The Ontario Power Boat Championships. It’s a good song with a Bo Diddley beat at times and more great stuff on harmonica.

CD Track List
The Ballad Of Albert Johnson was released on May 9, 2020. It followed the band’s 2016 release, Cigar Store.
Posted by Michael Doherty at 10:20 AM