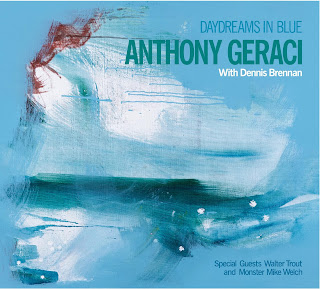 Anthony Geraci is a blues pianist and songwriter based in the Boston area. You might know him from his work with Ronnie Earl and Sugar Ray And The Bluetones, or from solo work. His last album, Why Did You Have To Go, was nominated for several awards. On his new album, Daydreams In Blue, he is joined by fellow Massachusetts musical force Dennis Brennan on vocals and harmonica, and by Monster Mike Welch on guitar. Michael “Mudcat” Ward (of Ronnie Earl And The Broadcasters) is on acoustic bass, and Jeff Armstrong (of Delta Generators) is on drums. There are also several special guests on various tracks. The album features mostly original material, written by Anthony Geraci.

The album gets off to a great start with “Love Changes Everything,” a wonderful jazzy blues tune with plenty of positive vibes. Its first line is its title line, “Love changes everything.” I want to see that put into action all over this country, because these times are calling for a whole lot of fundamental changes. “Take my hand/Together we stand.” This track has a delightful groove and some excellent stuff on piano. Adding to the joy of the song’s sound is the horn section of Scott Arruda on trumpet and Mark Early on saxophone. This track features a damn good instrumental section in the middle, featuring some great work on both keys and electric guitar. That’s followed by “Tomorrow May Never Come,” which has a great classic sound, with the piano helping to create that delicious rhythm. Plus, it is a love song. I love Dennis Brennan’s passionate delivery of “Baby, please come back to stay.” You can hear the need in his voice. This song is one of my personal favorites.

“No One Hears My Prayers” gets going with some nice blues guitar. Walter Trout is on lead guitar on this track. It’s another song about a relationship, this one a troubled one, with the first line being “Sometimes I wonder what you’re looking for.” Oh, it is tough when you’re not sure about the one you love. “I thought you loved me/But it seems you’ve changed your mind.” When Dennis Brennan sings, “I don’t pray no more/No one hears my prayers,” you get the sense he is in rough shape. It is like a declaration of losing hope, of giving up, and he repeats those lines, riffing on them at the end. In addition to that great guitar work, this track features some more wonderful stuff on piano. Peter Ward is on rhythm guitar for this one. Then “Daydreams Of A Broken Fool” begins with some pretty work on piano. After forty seconds or so, the song kicks in to become a rather groovy tune, with some excellent work on piano. “The days grow long without you/Sunny days never come/Lonely nights are all that’s left/And the daydream of a broken fool.” More classic blues vibes abound in “Mister,” a track that features some nice work on harmonica over that good, strong groove, plus more excellent stuff on piano, particularly during that lead halfway through.

“Tutti Frutti Booty” is, as you might guess from its title, a ridiculously fun and enjoyable track, a tune to get you on your feet, dancing with abandon. “Yeah, she wiggles when she walks like Jell-O on a spinning top/When you see that girl, you know your jaw will drop/She’s got a tutti frutti booty and she knows just what to do.”  Troy Gonyea plays guitar on this one. The entire band is grooving and hopping here, and I especially dig that drum beat. This track feels like it could lift the foundation from the ground and send us all into some heavenly dance party where there are no cares, no worries, just a whole lot of bopping and celebrating. Anthony Geraci then dips into some classic blues with a cover of “Jelly, Jelly,” a song written by Earl Hines and Billy Eckstein, and originally recorded in 1941 by Earl Hines And His Orchestra. Earl Hines was a pianist as well, so it comes as no surprise that this track features some absolutely wonderful stuff on piano. Plus, there is a cool lead on guitar in the second half. That’s followed by “Dead Man’s Shoes,” the only other track on the album not written by Anthony Geraci. This one was written by Dennis Brennan, Peter Wolf and Troy Gonyea, and features some haunting and excellent work on harmonica, as well as a passionate vocal performance. Troy Gonyea plays guitar on this track.

Things then get jazzy again with “Hard To Say I Love You.” The opening lines are “It’s hard to say I love you/When you’re six feet in the ground/So hard to say I love you/When you’re six feet in the ground/You’d best love me now/Pretty soon I won’t be around.” As the song begins, I assume it’s the other person that is dead, so the line “Pretty soon I won’t be around” comes as a surprise. There is a good energy to this track, particularly to the vocal performance in the second half. That’s followed by “Living In The Shadow Of The Blues,” another fun number. “I like the taste of your lips on my face/And the smell of your perfume/Still, I want you to know/I want you to know/We’re living in the shadow of the blues.” Oh, no question about it, and it’s a heavy shadow. The woman described in this song is not the woman for me (someone who smokes cigars, gross), but it’s a really good song. Then “Crazy Blues/Mississippi Woman” begins as a blues song about how everything is wrong. “Catch my face in the mirror/Lookin’ like I was born to lose.” Don’t we all feel like that at times? That leads into lines about a Mississippi woman who has done him wrong, leading us to think that a woman may be at the center of his troubles, the cause of his blues. Ah yes, wouldn’t be the first time. The album concludes with “Ode To Todd, Ella And Mike Ledbetter,” a short jazzy instrumental number.

CD Track List
Daydreams In Blue is scheduled to be released on July 10, 2020 on Shining Stone Records. (It was originally scheduled for an April release, but was pushed back because of the pandemic.)
Posted by Michael Doherty at 11:06 AM