Most of us are at the point where we are wondering when, or if, life will get back to normal, whatever normal meant for us last year. Not being able to see live music has taken its toll, and that of course is just one small – but important – aspect of the pandemic. On top of that, racism continues to run rampant under Trump’s watch, and things are getting uglier. Fortunately, artists have continued to release excellent albums to help us through this time. Here are some brief notes on a few new jazz releases you might want to check out. 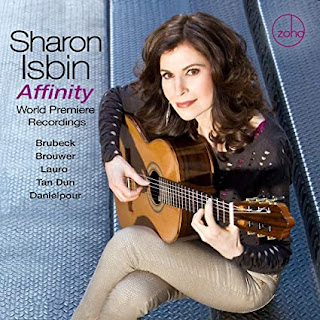 Sharon Isbin: “Affinity” – On this album, extraordinary guitarist Sharon Isbin delivers some fantastic music, much of it written specifically for her. The first track, for example, “Affinity: Concerto For Guitar & Orchestra,” was composed by Chris Brubeck for Sharon Isbin, and this is the first recording of it. Here the guitarist is backed by the Maryland Symphony Orchestra, conducted by Elizabeth Schulze. It is an excellent and beautiful track, and features some moving work on guitar. There are plenty of surprises too, such as the section with hand claps. Yet, through the many changes this track has, the music has a wonderful flow. On the three parts of “Of Love And Longing,” Sharon is joined by vocalist Isabel Leonard. This is another piece that was composed for Sharon Isbin, and she and Isabel Leonard premiered it in 2015. This is its first recording. There are also several solo guitar pieces. “Seven Desires For Guitar” was also written for Sharon Isbin, and this album marks its premiere recording. Guitarist Colin Davin joins her on a sweet rendition of “Waltz No 3.” The disc includes liner notes written by Chris Brubeck, Sharon Isbin, Mary Lou Humphrey and Richard Danielpour. This album was released on May 22, 2020. 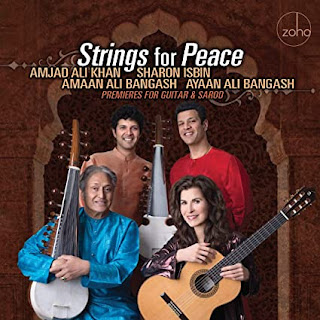 Sharon Isbin and Amjad Ali Khan: “Strings For Peace” – When I saw the title of this album, I imagined it was referring to world peace, and it may be, but as soon as the music started, I felt that this music was also designed for an inner, personal peace. And lord knows, we could all use a healthful dose of that right now. The album features only four tracks, but three of them are at least thirteen minutes long each, and so they provide a place for us to venture into, to relax, to let go. In addition to Sharon Isbin on guitar and Amjad Ali Khan on sarod, this album features Amaan Ali Bangash on sarod, Ayaan Ali Bangash on sarod, and Amit Kavthekar on tabla. While the first track, “By The Moon,” eases in, it does build in energy as it goes, and that bright energy seems to transfer to us as well, leading to a rather exciting conclusion. As “Romancing Earth” begins, it seems to be tapping into something timeless and beautiful and powerful, like the oldest of folk songs, uniting us with each other and with the planet itself. A wonderful piece of music that becomes exciting toward its climax as well. This album was released on May 22, 2020. 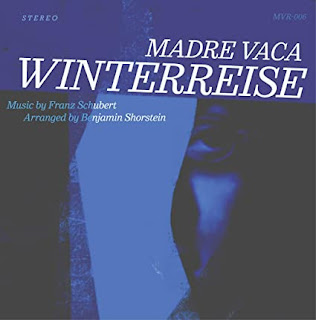 Madre Vaca: “Winterreise” – This wonderful release includes full jazz band renditions of music composed by Franz Schubert, from Winterreise (meaning “Winter Journey”), a song cycle of twenty-four poems by Wilhelm Muller. For this album, ten pieces from that song cycle were chosen, and the disc opens with “Goodnight,” a ridiculously enjoyable and engaging track featuring some excellent work from the horn section and some delightful work on keys. It’s so good, and it’s just the beginning. There is a lot of excitement in this music, particularly on tracks like “Frozen” and “The Crow.” The arrangements are by Benjamin Shorstein. There is one track, “The Sun Dogs,” which features vocals and piano, in line with the original arrangement. The group is made up of Juan Rollan on saxophone, Steve Strawley on trumpet, Lance Reed on trombone, Jonah Pierre on piano, Jarrett Carter on guitar, Mike Perez on bass, Benjamin Shorstein on drums, and Milan Algood on percussion. This album was released on June 4, 2020. 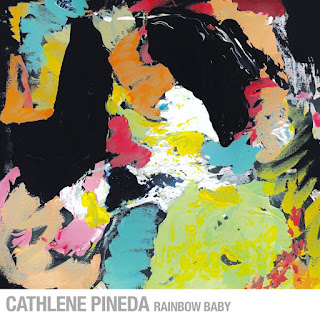 Cathlene Pineda: “Rainbow Baby” – The new album from jazz pianist and composer Cathlene Pineda contains some beautiful and moving music, all original material. Joining her on this release are Kris Tiner on trumpet, Tina Raymond on drums, and David Tranchina on bass. The music on this album was inspired by her experiences of pregnancy and motherhood, the first track, “1Nine,” being about the birth of her daughter in January of 2019. This track has different, distinct sections, conveying different emotions, and in the second half, there is a sense of urgency and excitement. The album’s title track is likewise quite personal. The term “rainbow baby” refers to a baby born subsequent to a miscarriage or the death of an infant. Cathlene Pineda suffered two miscarriages before the birth of her daughter, and this piece tells a complex and emotional tale. And, not wanting to leave her firstborn child out, there is a track bearing his name, “Milo.” This track too has different sections which feel almost like separate pieces. Probably my favorite track is “Wild Geese II.” There is something beautiful and uplifting, yet also exciting about it, the work on piano having a free quality. And there is some excellent work on drums. This album was released today, June 5, 2020. 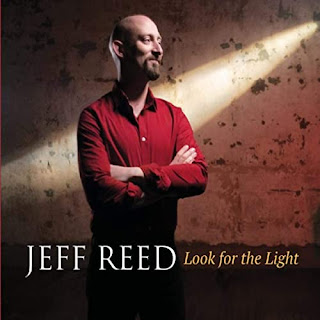 Jeff Reed: “Look For The Light” – Jeff Reed is a bass player and composer who has performed and recorded with a lot of different artists. Look For The Light is his first album as a band leader, and it features a mix of original material and covers. It opens with a cool rendition of Charlie Parker’s “Segment,” featuring a wonderful rhythm that takes us on an interesting journey, the other instruments seeming to be on the same ride as us, and we almost feel like we could converse with them. There is a really good drum solo toward the end. And this track sets the tone for the album, which has plenty of great work on bass and drums. One of my favorite bass leads is on the following track, “Waltz New.” There is so much movement to it, so much life. Of the original material, I love the way the horns pull us along in “Conversion,” bright bursts to guide us, and again over a good rhythm. That track also features an exciting lead on guitar, moving close to rock territory. And things take off from there. The album’s title track, “Look For The Light,” eases in and becomes a beautiful piece. The album’s final track, “Your Name Never Came Up,” is a lively piece featuring some outstanding work, particularly on guitar and drums. Joining Jeff Reed on this album are Sean Jones on trumpet, Todd Marcus on bass clarinet, Jonathan Epley on guitar, and Eric Kennedy on drums. This album was released today, June 5, 2020.
Posted by Michael Doherty at 6:58 AM