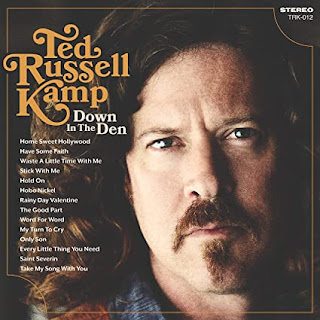 I am always happy to hear Ted Russell Kamp, whether he is sitting in with other artists (often on bass) or performing his own music. He has mastered several instruments, and can play in a pretty wide variety of styles, always seeming perfectly at home whatever the situation, whatever the style. His new album, Down In The Den, features some excellent original music, and some special guests, including Shooter Jennings and Jennifer Gibbons (of Funkyjenn). In addition to being an accomplished musician, Ted Russell Kamp is a fine songwriter, and his songs have been covered by Shooter Jennings and Sam Morrow, among others. The tracks on this release were all written or co-written by Ted Russell Kamp.

The disc opens with “Home Sweet Hollywood,” a catchy, rocking song about Los Angeles, where I’ve made my home for a couple of decades now. It is about people coming out here to pursue their dreams, while doing what they can to make ends meet. It feels like a celebration of the game that everyone here has to play in pursuit of those dreams. “Home sweet Hollywood/You gotta be crazy to stay/Home sweet Hollywood/I wouldn’t have it any other way.” Shooter Jennings joins him on vocals on this track. Ted Russell Kamp has played on several of Shooter Jennings’ albums. Emily Zuzik and Dan Wistrom also provide some backing vocals. “Home Sweet Hollywood” is followed by “Have Some Faith,” which has a cool, bluesy vibe. Ted Russell Kamp can certainly write a lyric that grabs you. Check out these lines:  “Well, each day a part of me gets left behind/Most days are good/Most nights are bad/Most of all I can’t get over what we had/All I want, want to do/Is to have some faith in you/All I need, need to see/Is you to have some faith in me.” I love his vocal delivery here. This song features some nice work on guitar too. Matt Szlechetka joins him on electric guitar and vocals on this track. He also co-wrote the song.

Ted Russell Kamp then lifts us up again with “Waste A Little Time With Me,” a song that has something of a New Orleans vibe, with that delicious rhythm and especially with that work on trumpet. And yes, that is Ted on trumpet and trombone. He also plays bass and keys on this track. There is certainly joy in the music and in the vocal delivery. We all need this sort of thing right now. “We’ve got nowhere to be, and not a thing to prove/We won’t do nothing that we don’t want to do/Come on and waste a little time, waste a little time with me.” We have all been wasting a bit of time lately, right? But when you do it with that special someone, well, it’s no waste at all. This track also features some wonderful work on keys. Brian Whelan joins Ted on keys, and Mike Bray joins him on vocals. Jim Doyle is on drums, and Bart Ryan is on electric guitar. This track has a cha-cha-cha ending. That’s followed by “Stick With Me,” a mellower song more in the folk and country realm. As I mentioned, Ted can take us through a lot of styles, and deliver absolutely excellent work in all of them. This song has a sweet vibe, and features Levi Duren on vocals. “We ain’t the kind to talk about forever/I couldn’t last a day without you here to hold/If your demons come to get you/And make you hit the highway/I’m going to come on out to find you/And help you see things my way/You’ve been running away from something/But, girl, I hope you see/I’ll stick with you if you’ll stick with me.” This track also benefits from some beautiful work by Eric Heywood on pedal steel.

Gordy Quist (from The Band Of Heathens) joins him on vocals on “Hold On,” a beautiful and moving song that he and Ted Russell Kamp co-wrote. “Well, that love has come and gone/And you’re barely hanging on/Then hold on, hold on to me.” Yes, it is a song that holds out a hand, a song that offers comfort. Songs like this are helping me get through these screwed up times, and I’m guessing I’m not alone in that. “Let go of all your troubles/Let go, and let them be/And hold on, hold onto me.” John Schreffler plays electric guitar on this track. Then we have horns on “Hobo Nickel,” a fun number that features Ted Russell Kamp on banjo (in addition to bass, acoustic guitar and percussion). Dave Richards is on trumpet and trombone on this track. Even though it has the “self”/“shelf” rhyme, this is a seriously enjoyable track, with a sweet joy to the music, and a bit of a playful attitude as well, heard in moments like when he sings, “I think I heard somebody just say ‘All aboard.’” Jamie Douglass is on drums on this one, and Bryan Whelan is on keys. “Got no destination/And no place to be/But it’s an open invitation/Won’t you travel with me.”

In 2015, Ted Russell Kamp released an album titled The Low And Lonesome Sound, on which his vocals were largely accompanied only by his bass. And on his most recent release, Walkin’ Shoes, he included one track in that style, “Highway Whisper.” I love when he approaches a song that way, for it gives the track such an intimate feel. On this album, he revisits the opening track from The Low And Lonesome Sound, “Rainy Day Valentine.” That’s followed by “The Good Part,” a positive, upbeat country number that promises “The best is yet to come/And the night is still so young.” Oh yes, we can all use that sort of optimism these days. Jennifer Gibbons joins Ted on vocals on this track. Then Sarah Gayle Meech joins Ted Russell Kamp on “Word For Word,” a sweet and cheerful love song. Ted Russell Kamp plays trumpet and trombone on this track. That’s followed by “My Turn To Cry,” a lively country number featuring with some nice work by Dave Berzanski on pedal steel.

“Only Son” is a beautiful song that features Shane Alexander on vocals and Dan Wistrom on pedal steel. Shane Alexander wrote this one with Ted Russell Kamp. “Time rushes by like a river will flow/The more that you learn, the less that you know/Then comes the day when you’re gone in the blink of an eye/Is there a part of you that stays behind.” Then at the end, that last line is changed to “I’ll be the part of you that stays behind.” That’s followed by “Every Little Thing You Need.” This one begins with just bass and vocals, and that bass line is groovy and totally catchy. Then the rest of the band comes in, and it becomes a fun and kind of adorable number. “I know it might be crazy/But ever since you called me baby/Every little sound is music to my ears.” Ted plays trumpet and trombone on this track, and Derek Morris is on keys. The track ends with bass. Jennifer Gibbons and Mike Bray join Ted Russell Kamp on vocals for “Saint Severin,” a soulful country number written by Ted Russell Kamp and Gordy Quist. The album concludes with “Take My Song With You,” a gorgeous, mellow number featuring Kirsten Proffit on vocals, this one delivered as a duet. “And when there’s no one around/And the world’s let you down/Please take my song with you/If you’ve hit the wall/And you’re waiting to fall/And life has been running you through.” Some of the greatest songs and some of the best literature function to deliver this message: “You’re not alone.” And this song tells us precisely that, and in a direct manner. Ah yes, this is what we need from music these days.