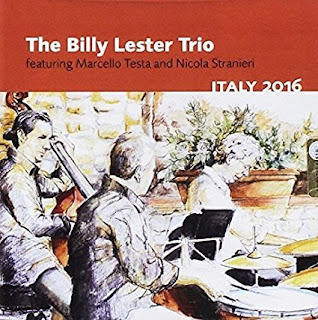 Honestly, I popped this CD in because of its title, Italy 2016. A simple title, certainly, but one which holds a strong attraction. My girlfriend is Italian, and we keep talking about going to Italy. As of yet, we haven’t managed it. But the country has an undeniable draw, and I thought this album might perhaps give me a taste of it. It was recorded in Italy last year, just as its title suggests, with the trio of Billy Lester on piano, Marcello Testa on bass and Nicola Stranieri on drums. All of the material is original, written by Billy Lester. I don’t know if the music gives me a feel for the country or not, but I can tell you it gives me joy.

It opens with a tune called “An Evening With Friends,” which just has a damn good feel about it, and works to improve my mood (something I seem to need more and more of, the deeper we get into the Donald Trump hell that is consuming our lives). It feels exactly as its title suggests – fun, kind of relaxed, sort of loose, but with good animated conversation. That is what this tune sounds like, and where it takes me in spirit. And like an evening with friends, this song has different voices. I particularly like what the bass has to say during its lead, with the drums supporting it, and the piano offering interjections. Hey, some friends can’t – and shouldn’t – remain quiet for long. This one might remind you of certain versions of “Just Friends.” It’s followed by “Yeah Man!” And, yeah, that excited, positive title is matched by the music, with the bass sounding like the instrument itself is smiling. And Billy Lester really delivers here, often having at least two things going on at once on keys, almost like he’s having a conversation with himself, or like two people are having a conversation with us, telling us a tale that they’re excited about. Halfway through, there is a delightful bass solo that might get you snapping your fingers and perhaps even exclaiming “Yeah man!” There are also several short, but cool drum solos, maintaining that good groove throughout.

“To Julia” is a somewhat mellower tune, with the bass and drums providing a romantic base, allowing the piano a freedom to get wilder right from the start. Billy Lester’s work here does have something of an improvisational feel, almost like he’s carried away with the emotion and perhaps even the motion of playing.  Marcello Testa delivers a gentle, loving bass solo. Is it just me, or does he tease “The Glory Of Love” just a bit? Billy Lester’s lead on piano which follows is fairly lively, over a relaxed rhythm, creating an interesting effect. Then “Pop Pop Train” comes on strong. This is a lively, fast-paced gem that indeed pops and doesn’t let up. I especially dig Nicola Stranieri’s work on drums. That’s followed by “Consolidation,” an enjoyable tune featuring more spirited playing by Billy Lester. Seriously, this whole disc has a tremendous amount of joy worked into the music, and it should help your mood whenever you need it (like anytime you happen to recall who is occupying the White House). The CD concludes with “Omens,” a track with a strong groove. And if you think that a tune titled “Omens” might be more of a downer, or have haunting or frightening aspects to it, do not fear. This is another fun, lively number, and features a really good bass solo. This is an album I think I’ll be turning to often.