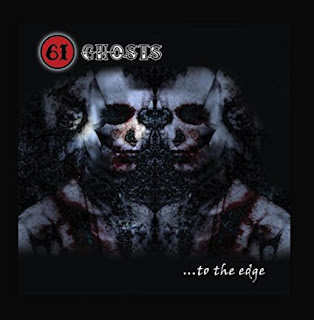 If you’re looking for some good, bluesy, raw rock to sink your teeth into, check out 61 Ghosts, a duo made up of Joe Mazzari on vocals and guitar and Dixie Deadwood on drums and backing vocals. Earlier this year they released …To The Edge, an EP of original material, featuring J.D. Sipe on bass. You might be familiar with Dixie’s drumming from her work with Leo Bud Welch. You can watch her on Welch’s Live At The Iridium DVD, where she is credited as Dixie Street. Actually, I have no idea what her real last name is. There she is Dixie Street, here she is Dixie Deadwood, elsewhere she is Dixie Swearingen. Dixie, if you read this, let me know what’s up with all the different names, as I’m curious. Joe Mazzari has played and recorded with Johnny Thunders, as well as fronted bands like Two Saints and the Joe Mazzari Band. Joe Mazzari wrote all the songs on …To The Edge, as well as produced the CD.

The EP opens with “Heartbeat,” which begins with just guitar easing us in. But it isn’t long before the song kicks in, signaled by Joe’s “Huh,” and becomes a good, raw rock number, Joe Mazzari’s vocals with just the right rough quality as he delivers lines like “I heard her screaming like a train whistle.” And I absolutely love these lines: “I’ve been lonesome, even in my dreams/When you’re here, I don’t feel quite so low/When you’re gone, it ain’t as bad as it seems.” Maybe it’s because of the long-distance aspect of my relationship, but those lines are really effective. Anyway, this track works as a solid rock tune, but also is not lacking substance. You know? It’s followed by “No One At Your Door,” which also begins with the guitar part, which has almost a punk vibe at the start. I dig the urgency in the rhythm and vocal line. “Is it me or is it him/I don’t know the score/This game is wearing thin/You don’t need me anymore.” It’s not quite anger in his voice. It’s like he wants to be angry, but things have been going on like this for long enough that maybe he’s just ready for the end. By the song’s finish, however, his voice is raised, as if to put an end to it on his terms.

“World Gone Crazy” is a cool tune right from its start. “In a world gone crazy/In a world of sin/Cyclone ripped me out of my shoes/Whirlpool sucks me in.” It draws you in, feels like it might pounce at any moment, that guitar teasing us, luring us to the song’s center where it can do with us as it pleases. It’s a song with power, and one of my personal favorites. And that lead guitar part halfway through is wonderful, the way Joe lets a note play and fade, the way he incorporates pauses so that we pay even more attention to what is played. And the song’s title certainly seems apt these days, doesn’t it? I still can’t believe that racist dipshit is in the White House. Toward the end, when Joe shouts “Let’s go,” I feel like we are already there. The tune then grows quiet just before one last explosion at the very end.

“World Gone Crazy” is followed by “If Tears Were Dirt,” in which Joe tells us, “I ain’t gonna live with this broken heart,” the line delivered in a straight-forward way, almost as spoken word. That helps make it feel like truth. “And I know you’re hurt, hasn’t been the best of years/We ain’t gonna live a day apart, day apart.” After a minute or so, this song suddenly is kicked up several notches. And as there are peaks like that, there are also valleys to this one, making for an interesting journey. Yes, this song is another of the EP’s highlights. Then “Show Me Your Scars” has a gentler folk vibe, which I love. “When your thoughts run like rivers, I will slow them down/When you lose your way, I’ll turn you back around.” And as he sings the title line, the experience in his voice gives us the impression that he too has his own scars. The EP then concludes with “Passion Tipped Arrow,” which also is more in the folk realm.

CD Track List
…To The Edge was released on June 15, 2017 through Bluzpik Media Group.
Posted by Michael Doherty at 11:12 PM