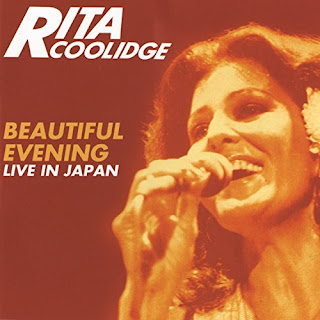 I saw Rita Coolidge in concert once, more than a decade ago at an Earth Day event, and she was wonderful. I wish I’d recorded that concert, as it also featured Richard Thompson and Michelle Shocked, and my memory is getting a bit hazy on certain things. I think Rita Coolidge’s performance was during the time of Walela, the vocal group she had with her sister. Anyway, it was a pleasure to see her perform. And now I’m enjoying the recording of a much earlier performance of hers. Real Gone Music has released an expanded edition of her Beautiful Evening: Live In Japan album, which was recorded and originally released in 1980. This was her first live album, and this expanded edition is actually the first time it’s been officially released on CD. It includes five bonus tracks, and new liner notes by Joe Marchese.

The album opens with “(Your Love Has Lifted Me) Higher And Higher,” a song from her 1977 LP Anytime…Anywhere, and one that was also included on her 1980 Greatest Hits compilation. The song itself was originally “(Your Love Keeps Lifting Me) Higher And Higher,” but Rita Coolidge made several key changes to it for her version. The version on this live album begins with backing vocalists singing the title line as someone introduces Rita Coolidge. And when the song kicks in, the audience claps along. This is a good, energetic version. She follows that with “Cheap Thrills,” a song that David Allan Coe would choose to lead off his 1983 LP Castles In The Sand. Rita’s beautiful voice gives the song a different feel than that version, but this is still a playful number. “Shoo-rah, Shoo-rah” is a totally fun and enjoyable tune, written by Allen Toussaint and recorded by Betty Wright in 1974. I have to imagine the crowd was dancing to this one, but maybe not, as Rita is quoted in the liner notes as saying the Japanese “would be so polite throughout the concerts.” At any rate, this song is full of bright energy, with some nice work on keys.

Rita Coolidge then slows things down with “Fool That I Am,” a pretty song from the soundtrack to Coast To Coast, and one included on Greatest Hits. She introduces it as her new Japanese single. “Oh, I tried to/Make the best of/All the sweet love/That you gave me/Maybe I’m crazy/But I keep on losing ground/Fool that I am, fool that I may be.” This is one of the highlights of the album. And it’s followed by another highlight, “Fever.” I always love this song (except for Madonna’s completely misguided interpretation). Rita Coolidge included this on The Lady’s Not For Sale, which is probably still my favorite of her albums. This live version isn’t quite as cool as that earlier recording, but still has everything that makes this song so great and very little that detracts from that. Rita can totally work this song. And it leads directly into a good cover of “Precious, Precious,” which Jackie Moore had a hit with a decade earlier. Oddly, this recording fades out at the end, as if it were a studio recording.

Rita Coolidge also covers Jimmy Cliff’s “Footprints,” a song from his 1978 album Give Thankx. The bonus tracks include Rita’s studio recording of this song, which was released as the flip side to the Japanese single of “Fool That I Am” (but not the American version). It’s definitely cool to have this recording, and I’m glad it’s included here. Rita Coolidge also delivers an absolutely gorgeous rendition of “Don’t Cry Out Loud,” a song that the Japanese audience recognizes right away. Rita recorded a studio version of this song, and it was released as a single in Japan. That version is included in this disc’s bonus tracks, and it’s beautiful. The original album concludes with a cover of “One Fine Day,” the Gerry Goffin/Carole King song that Rita included on her 1979 album Satisfied.

This expanded edition includes five bonus tracks. Interestingly, none of them are live recordings, as you might expect. These are all studio tracks that were originally included on Japanese releases. In addition to the two I’ve already mentioned, these tracks include a cover of “Best Of My Love.” I am not a fan of The Eagles, but this version is okay. It’s kind of sweet, kind of smooth. There is also an extended version of “Love From Tokyo,” which was released as a Japanese single in 1984. This track is unmistakably a 1980s recording right from its start, especially the sound of the keyboards and drums. A shorter version of this song was included on Inside The Fire, also released in 1984. “Sweet Memories,” also released as a single in Japan in 1984, is a beautiful song featuring a strong and moving vocal performance from Rita Coolidge. “Don’t ask me, baby, if I am happy/I never could lie/Friends help me get by.”