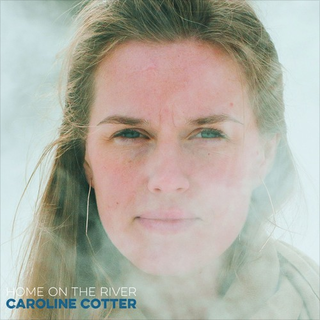 In the liner notes of her new album, Home On The River, Caroline Cotter tells us that the songs were written for her parents and grandmother. She goes on to say, “They were recorded for you and yours, in hopes that we all may be at peace with what is and feel at home on the river.” That’s what most of us seem to be looking for and needing desperately these days. It certainly doesn’t seem easy to come by. Peaceful feelings and thoughts come in spurts, usually when I am not reading the news. But the music on this disc is definitely helping, and I appreciate that. Something about Caroline Cotter’s voice is capable of easing tensions and making us feel that perhaps things aren’t as horrible as they seem to be. Her voice and this music also remind us that the current troubles will come to an end, but the things that truly matter will go on long afterward. This is a beautiful album, containing mostly original material, written by Caroline Cotter.

“Peace Of Mind” is followed by “1 4 3,” a pretty and bright-sounding folk song. The title is interesting, playing with our expectations of it being “I am with you 1-2-3,” playing with the order, like a step into the future, then back into the present, giving us a sense of the eternal. It’s also a reference to “I love you” (one letter, four letters, three). And so for me it seems like an unending love, untouched by death.

“Home On The River,” the album’s title track, is one of the disc’s best songs. It has such a wonderful vibe, with some cool percussion and an excellent vocal performance. Check out these lyrics: “There are rocks and stones/That hold the house on the river/Where I have my home/And I’ll hold you there/In my arms by the river/To keep from feeling cold.” Adding to the delightful sound of this track are Putnam Smith on banjo and Annabelle Chvostek on fiddle. I also really like Rob Morse’s work on bass. That’s followed by another of the album’s highlights, “When I Think Of You.”  It’s a gorgeous country number, with something of a classic, timeless vibe at moments, delivered directly to her father. “I’ve seen the maps around your room/And I’ve seen the places they’ve taken you/Still it’s just fine to feel so lost/My home is my heart and my heart is dust.”

There is something about “Can’t Stop The Waves” that really works for me. This one has a more intense feel, is strangely pretty and haunting. “I’ll be beside you when you wake/I can’t stop the waves/Find me whole or find me frayed/I can’t stop the waves.” Caroline Cotter reaches some great heights vocally, and this track also makes good use of backing vocals. Caroline Cotter opens “Hey Mama” by reminding her mother (and us) that it’s all right to cry, and then begins a tale that might actually make us tear up. But it’s ultimately a positive-sounding song, in part because of Jefferson Hamer’s work on mandolin. It’s followed by another positive song, “Found,” a song I really appreciate. “I wake up next you/And say I’m excited for today/The sky’s that shade of blue/Her beauty mirrored in the bay.” The album then ends with its sole cover, a pretty rendition of “My Peace” delivered a cappella. It’s an interesting bookend working with the album’s first track, for she’s apparently found the peace she’d sought, and now wishes to spread it, to give it to others, to us.

CD Track List
Home On The River is scheduled to be released on February 9, 2018.
Posted by Michael Doherty at 9:56 PM