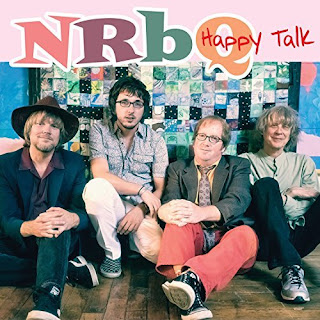 I am constantly in need of music to lift my spirits these days, what with the country run by racist imbeciles hell-bent on making themselves a buck at the expense of the planet and everyone else living on it. Well, the very second that the latest NRBQ release began, I started feeling great. This band – in various configurations – has been around for fifty years, and is still making excellent music. At this point, the only original member is Terry Adams, with Scott Ligon on vocals and guitar, John Perrin on drums, and Casey McDonough on vocals and bass. The new release, Happy Talk, is five-song EP featuring a couple of original tunes along with a few interesting covers. Conrad Choucroun plays drums on three of these tracks.

The EP opens with “Head On A Post,” a fun tune written by Terry Adams, with a bit of a classic rock and roll thing happening, and a spirited, delightful vocal delivery. Yeah, the song has a loose vibe, and I dig Adams’ work on piano. As I said, this song lifted my spirits the moment it began, and I think it will have the same effect on others. So if you’re in need of that sort of thing as we make our way through the holidays, check out this song. That’s followed by the EP’s other original tune, “Yes, I Have A Banana,” a playful song on the joys of poverty, the song itself being a play on another playful tune, “Yes, We Have No Bananas,” from the 1920s. “I just blew into town/The loneliest guy around/And I don’t have a pot to call my own/Before you get too sad/This way of life ain’t bad/Because if you’ve got troubles/You’re never alone.” Ha! Wonderful! Things are fine as long as one has a banana, and I enjoy hearing the different words they choose to rhyme with “banana” – “Montana,” “Hannah,” “piana.” And the line that leads into the totally enjoyable instrumental section is “Ah, peel one off.” Yes, I absolutely love this song. It was written by Terry Adams, Scott Ligon and Casey McDonough.

The other three tracks are covers, beginning with a nice rendition of “Only The Lonely,” the Roy Orbison hit. This version has more of a relaxed country feel, which works quite well. Ah, it can be lonely out on the range. This rendition works so well in part because they don’t try to sing it the way Roy Orbison did. After all, no one else has that voice. But these guys approach the song from a completely different angle and make it their own, thus avoiding comparisons in a way. They follow that with a wonderful take on Abb Locke’s “Blues, Blues, Blues.” Here they sing, “Everybody’s got the blues, blues, blues, blues, blues.” True, so true, but maybe hearing this song will help alleviate them a bit. Certainly worth a try, right? “My woman gave me the blues/I’m feeling so hurt and misused/I don’t want to hear nothing but these good old blues, blues, blues, blues, blues.” And I love the little jam at the end of the track. They conclude the EP with its title track, “Happy Talk.” I can’t help but smile while listening to their earnest take on Rodgers and Hammerstein’s classic song from South Pacific. “You’ve got to have a dream/If you don’t have a dream/How you gonna have a dream come true?”