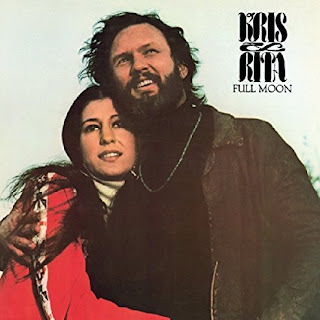 Kris Kristofferson and Rita Coolidge were married in 1973. That same year they released their first album together. Titled Full Moon, it includes some covers and some original material, including two songs that the couple wrote together. It’s an excellent album that somehow had not been issued on CD in the U.S. until this year. Crazy, right? This CD release is an expanded edition, including six bonus tracks, none of which had been previously released, and new liner notes by Joe Marchese.

The album opens with a cover of Larry Murray’s “Hard To Be Friends,” certainly an interesting choice for a first song from the couple. Rita sings lead at the beginning (“It's so hard to be friends/When it was so easy to be lovers”), but then they sing the rest of the song together, their voices blending perfectly. “So hard to step forward/So easy to turn inward/Too soon to be ended/Too late, too late to be mended.” That’s followed by “It’s All Over (All Over Again),” one of the tracks they wrote together. On this one, they trade lines at the beginning, then harmonize on other lines. It’s a song about second chances, and has an uplifting vibe that I appreciate, even though you get the sense that perhaps they’re heading for trouble again. The song plays on the phrase “all over” in the lines “Oh, darlin' we're starting all over/It's all over, all over again.”  And check out these lines: “We know that we've both got so much to lose/And the rest of our lifetime to pay/’Cause we could be good to each other/Better than we've ever been.”

“From The Bottle To The Bottom” is a fun country tune and has one of the two best song titles of the album. They trade off lines on this one too, with Rita starting it, “You ask me if I’m happy now/That’s as good as any joke I’ve heard/Seems that since I’ve seen you last/I’ve done forgot the meaning of the word.” Kris responds, “If happiness is empty rooms/And drinking in the afternoon/Well, I suppose I’m happy as a clam.” This one was written by Kris Kristofferson and is one of my favorites. It features some nice work on fiddle by Vassar Clements (a talented musician I learned about through his work with Jerry Garcia in Old & In The Way). The other great song title is, of course, “I’m Down (But I Keep Falling),” which is the second of the two songs written by Rita Coolidge and Kris Kristofferson. Rita sings lead on this one.

They do a really good cover of Bobby Charles’ “Tennessee Blues,” beginning it with the vocals rather than the instrumental section that opens Charles’ rendition. Kris sings lead on the first verse, with Rita singing lead on the second verse. “If I had my way/I’d leave here today/And leave in a hurry/I’d find me a place/Where I could stay/And not have to worry.” This is another of the album’s highlights. I also love their cover of “I Heard The Bluebirds Sing,” a song written by Hod Pharis and released as a single by The Browns in the 1950s. It’s a sweet and cheerful tune, and Kris and Rita do a wonderful job with it. That’s followed by “After The Fact,” a beautiful and moving track featuring perhaps the best vocal performances on the album. The original album concludes with a Kris Kristofferson composition, “A Song I’d Like To Sing,” a light and enjoyable tune with an island beat.

This expanded edition includes six bonus tracks, though only one of them is from the sessions for this album. That one is “Hobo’s Lullaby,” a song written by Goebel Reeves and recorded by many folks over the years, including Woody Guthrie, Arlo Guthrie, Emmylou Harris, Pete Seeger and The Kingston Trio. Kris Kristofferson and Rita Coolidge do an excellent job with it, and I wonder why it wasn’t included on the original release of Full Moon. Well, no matter now, I suppose, as we get to enjoy the recording on this new edition.

The other tracks are all Rita Coolidge solo recordings from the years 1972-1974. Two were written by Marc Benno, who played with Leon Russell in Asylum Choir before starting his solo career. The first of those, “Lost In Austin,” would end up being the title track to one of Benno’s solo albums, but this recording by Rita Coolidge predates that release by several years. It was recorded during the sessions that resulted in 1974’s Fall Into Spring. The sweet country sound of this track makes it fit right in with the songs of Full Moon. The other Marc Benno song is “Speak Your Mind,” recorded in 1972 during the sessions for The Lady’s Not For Sale, which is still my favorite Rita Coolidge album. This version is good, but it does feel like it goes on longer than it needs to.

“Our Child Will Be Born,” recorded in 1973, has a kind of country pop feel. That’s followed by “Someone Loves You Honey,” a song written by Don Devaney and originally recorded by Johnny Rodriguez. That recording was released in 1974, the same year that Rita Coolidge recorded this version. A few years later Charley Pride had a big hit with it. It’s kind of cheesy, but sweet. “I’m glad that I’m the one/That you come to when you need someone/That’s what my love is for/It’s a shoulder to lean on, a port in a storm.” Also included here is Rita Coolidge’s cover of “Girl To Be On My Mind,” a song written by Graham Nash and included on the Graham Nash/David Crosby album. Here it is done as “Man To Be On My Mind,” and is an absolutely wonderful rendition. This was recorded in 1972, another outtake from The Lady’s Not For Sale.