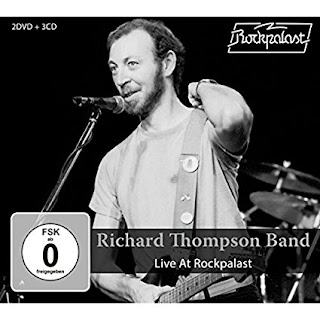 The first time I saw Richard Thompson in concert was when I was in college. He was on a bill with Joan Baez, and the tickets were rather expensive (for that time, anyway). I couldn’t afford the admission, but went to the show, thinking I’d be able to watch from the back, as it was an outdoor show at a park. But the fence was too high back there, and as I walked the perimeter in search of a low point in the fence, I ended up at the backstage entrance, and at that moment Richard Thompson was walking in. So I met him and went on in. Good show.

I’ve seen him a couple of times since then, and always enjoyed his performances. So I was excited when I heard about the new Richard Thompson box set. Titled Live At Rockpalast, it is a five-disc set (three CDs, two DVDs), containing two complete Richard Thompson Band concerts from the 1980s.

The first show is from December 10, 1983. And yes, for some reason the first concert is included on the second DVD (though it is listed as being on the first DVD on the back of the box). It’s nearly two hours, and so takes up two CDs. This concert was performed at a relatively intimate venue in Hamburg, to an enthusiastic audience. It was filmed with multiple cameras, giving us close-ups of each of the band members. And there are two saxophones and an accordion. And check out the Cornflakes box guitar (which Richard jokes about when introducing the band partway through the set). The band is Richard Thompson on vocals and guitar, Simon Nicol on guitar, Pete Zorn on saxophone, Pete Thomas on saxophone, Alan Dunn on accordion, Dave Pegg on bass and Dave Mattacks on drums.

The introduction is done in German, and then Richard Thompson kicks off the show with “The Wrong Heartbeat,” a song with a fun, strong, catchy groove. The song title appears on screen, and that is done for each of the songs of the set, though sometimes whoever is in charge of doing it has trouble recognizing a song or is off on a bathroom break because a song title doesn’t appear until halfway through the song. But no matter, as you have the song titles listed on the box anyway. “The Wrong Heartbeat” is followed by “A Poisoned Heart And A Twisted Memory.” What a great song title. And the song itself is excellent. Richard Thompson can certainly write some damn good lyrics. “Is this the way it’s supposed to be/A poisoned heart and a twisted memory.” Richard Thompson is clearly enjoying himself. Watch the way he plays with certain words in his delivery. That’s followed by an energetic and totally fun rendition of “Tear Stained Letter,” featuring delicious stuff on saxophone and accordion. Both saxophone players and the accordion player take turns on lead before Richard Thompson takes over lead on guitar, and they just jam. It’s a rousing rendition that feels like a set closer. But the band is just getting started. Those first three songs, by the way, are all from Hand Of Kindness, which at the time was his newest release.

Though Richard and Linda Thompson had split a couple of years before this show, Richard still does a lot of material they recorded together, including “Night Comes In” from Pour Down Like Silver, and several tracks from Shoot Out The Lights (“Shoot Out The Lights,” “Don’t Renege On Our Love,” “Wall Of Death,” “Man In Need”). He also does a wonderful rendition of “Amaryllis” (spelled correctly on screen, but listed as “Amarylus” on the back of the box), which begins with drums and accordion and hand claps, and is a lot of fun. After that song, Richard thanks the audience. Then, realizing that’s the first time he’s spoken during the performance, he adds: “I just forgot to say hello. I’m very sorry. Good evening.” And, when introducing “Hand Of Kindness,” he says, “Well, I didn’t come here to advertise, but here’s a track off my last album, thank you.” Alan Dunn, the accordion player, sings lead on “Alberta,” another really fun track, with some clowning around between Richard and Pete Zorn.

Richard Thompson gives a delightful introduction to “Pennsylvania 6-5000,” perhaps the most surprising song of the set: “Did you ever live in fear of the day when you’d wake up and you’d like the same music your parents used to like? This is a very frightening thing. Well, it’s happened.” He goes on to say, “This is one my mom likes very much.” By the way, the bell needed for this song is attached to one of the saxophones. Yeah, the saxophones really drive this number. And hey, is the audience actually doing that whistling toward the end? Very cool. That’s followed by “How I Wanted To,” a seriously pretty song from Hand Of Kindness (which is mislabeled as “How I Wanted You” on the back of the box). Another highlight of the first show is “Two Left Feet,” also from Hand Of Kindness. This one too is ridiculously fun, particularly the work on accordion. The saxophone players seem to be having a blast. The set ends with “Back Street Slide,” from Shoot Out The Lights.

The enthusiastic crowd calls the band back for an encore, and as Richard Thompson begins to play “Both Ends Burning,” for some reason his name appears across the screen as it did at the beginning of the concert. This song is a delight, and I love the accordion. It’s followed by a playful rendition of “Danny Boy,” which kicks in to become a rockin’ number. The crowd calls the band back again (by the way, we are treated to shots of Richard Thompson backstage before he goes back out). This time the band does covers of a couple of early rock and roll numbers – an instrumental rendition of  “You Can’t Sit Down” and a damn good version of Jerry Lee Lewis’ “Great Balls Of Fire,” which gets the crowd dancing. The audience calls the band back yet again, and they do “Highschool Hop,” another fun, high-energy rock and roll number. The audience keeps clapping for another encore, but the house music drowns them out.

The DVD contains no closing credits, but does include a special feature – an interview with Richard Thompson conducted after the show. He talks about different audiences and the effect they have on musicians. He does mention the whistling.

The second show is from January 26, 1984, at Cannes, at a venue that is not as intimate as that of the first show, and before an audience that is not nearly as enthusiastic. This show has the same set list as the first show, up through “Two Left Feet,” which concludes the set. So, yes, it is significantly shorter. As Richard Thompson explains just before starting “Two Left Feet,” Van Morrison was coming up next, so there was a time restriction. As with the first show, the songs are identified on screen, sometimes quite late into the song. The band for this show is the same as the first show, with two exceptions: Rory McFarlane is now bass, and Gary Conway is now on drums. There is very little stage banter between songs, just an occasional “Thank you” and a note when the two saxophone players sit out for a few songs: “Saxophones have a rest now. They’ve been blowing hard.” And what is the deal with the spotlight that roams over the crowd between songs? Weird.

The music itself is quite good, of course. Richard Thompson delivers some excellent guitar work on “A Poisoned Heart And A Twisted Memory.” The band gives us another energetic rendition of “Tear Stained Letter,” with some wonderful back and forth between saxophone and accordion, and some delicious rock and roll guitar work by Richard Thompson. “Alberta” is wonderful, with some great stuff on saxophone. I love the shot of Richard smiling over the saxophone player’s shoulder while he plays. A moment later the saxophone player bumps into Richard. “How I Wanted To” is again beautiful, and is one of the show’s highlights.

This DVD is also without closing credits of any kind, and does not include any special features. However, camera credits and so on for both shows are included on the back of the liner notes booklet included in the set.

Live At Rockpalast was released on November 3, 2017.
Posted by Michael Doherty at 12:40 PM