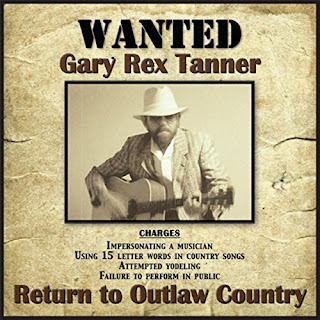 Singer and songwriter Gary Rex Tanner’s new album, Return To Outlaw Country, features all original material. The image of the cowboy is central to most of these songs. Yes, we now live in a world where, for better or worse, a lot of the romance has been drained from that image. The characters of these songs seem well aware of this, and that knowledge is perhaps the source of some of the poignancy of these songs. Yet this music also works to return some of that romance to the image. There is humor as well as sadness to some of the stories told in these songs, to some of the characters, and I’ve always found those two elements to be intertwined in the most effective art. These songs feature some good lyrics, like these from “One More Wild Horse”: “Why do you study these lines on my face/They’re just old road maps of pleasures I’ve chased/But if they entreat you, as you say they do/I can’t find a reason to argue with you.” Joining Gary Rex Tanner on this release are Eric Bikales on keys, Chris Leuzinger on guitar, Mike Loudermilk on guitar, Mississippi Slim on guitar, Dow Tomlin on bass, Richard Dodd on cello, Tom Corbett on mandolin, Steve Turner on drums, Dann Sherrill on percussion, Mitch Grainger on harmonica, and Edward Tree on backing vocals.

The album opens with “Just Like A Cowboy,” a somewhat confessional look inward. It opens with the line, “I’ve always been the restless type.” That line, at least for me, has a humorous bent because his voice has the relaxed quality of someone who is not out a-wandering. Perhaps he is restless in his mind, something most of us can relate to. And after all, he’s not saying he is a cowboy here. He has other characters liken him to a cowboy, which is more interesting, in lines like “Like someone’s idea of a cowboy” and “They think I’m just like a cowboy.” It’s an image he takes to heart, seeming to hope to be what they think he is. “I never do pretend to be/The answer to a woman’s dreams/I’m just a guy in boots and jeans/Hell, I’m just trying to be like a cowboy.” I love those lines. Gary Rex Tanner follows that with another song about being a cowboy, and being – or at least feeling – out of place as a result, but ultimately being secure in who he is. Titled “Cowboy Clothes,” here is a taste of the lyrics: “Don’t know much about fashions/Some of them are cute/I may wear a suit/But I still wear cowboy boots.” This song has a pleasant, positive vibe.

In “Hussong’s Cantina,” he sings about being a lonely cowboy, drinking and yearning for love. This song creates a compelling and interesting character, as well as a strong sense of place. “You never know when you might run into/Someone who can bust your bubble/Someone who is worth the trouble/Someone soft and warm to pull you through.” There is a spirited delivery to the song’s lyrics which I appreciate and which help make the song something special. “Unscheduled Day Off” is a lot of fun. It’s country, but with something of a pop flavor to its enjoyable rhythm. “I slept in late this morning/Woke up stretching and yawning/Called up the boss’ recorder/I said that my car’s out of order.” Ah, sometimes when you wake with a beautiful woman, the idea of going to work holds no appeal. And like he says in this song, “Sometimes a man’s simply got to/Stop and do something he wants to.” I also like these lines: “I could have gone in, but I just couldn’t get in the mood/I’ll show up tomorrow, complete with a new attitude.”

Some good work on harmonica opens “When I Was A Cowboy.” In this bluesy little gem, Gary Rex Tanner mentions Mississippi Slim, a musician who plays with him on this release as well as on earlier releases (not to be confused with other musicians named Mississippi Slim, such as the blues singer). Interestingly, he places himself and Mississippi Slim in another time (or conflates two time periods), so that they can encounter Jesse James. And that’s just one verse in this fun tune. It’s followed by a sweet and pretty song called “An Angel To Guide You.” “I know I’m not perfect, but I’ll have to do/’Til God sends an angel to guide you/You win a few battles/You lose a few friends/You take love for granted/It suddenly ends.” There is some nice work on keys. And, as always, I love the cello.

Several of these songs are told from the perspective of an aging cowboy, looking back at his exploits and taking stock in his life now. In “One More Wild Horse,” he sings, “Now someone may tell you that I’ve lost a step/But I’m here to assure you I’m not finished yet/So part your lips sweetly and kiss me again/And I’ll just keep waiting for a good second wind.” And in “Young Guns,” the song that closes the album, he sings, “I’ve got some fight left in me, but this may be my last” and “But if I’m half the man I was, I’ll chase them out of here.” And though he still delivers some lines with some bravado and swagger, bragging “The gals in California ain’t seen the last of me,” he is also well aware of mortality. “But won’t you let me sing a few more songs/Tomorrow I’ll be gone.”