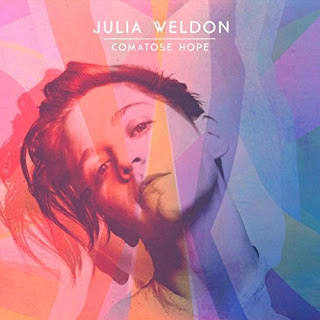 Comatose Hope, the new album by singer and songwriter Julia Weldon, is something special. It features all original material, songs that resonate emotionally, songs of depth and beauty, songs you’ll connect to. Hers is a voice reaching out from the darkness, quite literally actually, as many of these songs came about after she emerged from a coma following surgery. There is something ethereal about her delivery, yet also something grounded, like she has taken something from that strange place where she dwelled and was able to shape it into these songs, and in doing so to share with us a piece of that experience. Julia Weldon plays guitar, ukulele and piano on these tracks. Joining her are Drew Morgan on cello, keys, synthesizers, guitar, bass, kantele and percussion; and Matt Brown on drums.

The album opens with “Til The Crying Fades,” a gorgeous and moving song. This one gets right to me, pulling me in, even before Julia’s vocals begin. This is the first song I heard from this release, the song that got me interested. It was released as a single, and there is a video for this song as well. The song was written for the victims of the Pulse shooting, and at the end of the video their names appear. This song does sometimes have me in tears, and yet it really has a positive vibe. “And they say you’re in a better place/But I think your death’s a big mistake/There are flashbacks that we can’t erase/So hold me ‘til the crying fades.”  That’s followed by “Kaleidoscope,” an absolutely wonderful love song that makes me feel good. It has an uplifting sound, and toward the end, when the drumbeat builds steadily, it feels like the song is ready to take on the world. And listening, I feel the same way. “We are the choices we make/We are the choices.”

“Comatose Hope,” the album’s title track, has more of a gentle folk sound at the start. As you might guess, this is a song that emerged as a result of Julia’s coma. “There’s a sadness I can’t say/’ Cause no words could come close/To my close look at dying/My comatose hope.” “Comatose Hope” is strangely soothing, almost as if to say that there is nothing to be afraid of. The song then suddenly deposits us at the beginning again, like it is giving us a look at the beyond, but safely returning us to the present, to our lives, as Julia herself returned. Yes, Julia Weldon is a remarkable songwriter.

“Take Me To The Water” is a beautiful song, with an uplifting feel (the positive sound is due in no small part to the presence of ukulele). Here is a taste of the lyrics: “Love is not an anchor/In the sea/Oh, I am alive/But this deep blue could eat me/Never let me go/Don’t set me free/Take me to the water/And make me clean.” And I really dig that percussion. “Take Me To The Water” is followed by “Everybody Says,” a song about dealing with a painful breakup. “Everybody says/That this is for the best/And I listen with both ears/And I agree with them, I guess/But you’re this heart inside a cage/You’re the burning in my chest/You’re the reason that I stayed/You’re the reason that I left.” “Take It All Back” is one of my favorites. It’s a powerful and excellent song, also about the end of a relationship. “Yeah, I take it all back/’Cause you can’t hold me again, not like that/Not like that.” And I love the strings.

Something about the vocal line of “When You Die” reminds me a bit of Edie Brickell And The New Bohemians. It’s followed by another of my favorite tracks, “Failed To Find,” which begins quietly, almost sweetly on acoustic guitar. Check out these opening lines: “I saw my heart splitting in two/I saw the future when I kissed you/Last night in the calm our lips told the truth/You are the answer that needs no proof.” The song then takes a surprising turn. When it kicks in, we learn just how wrong things have gone:  “I’ve cheated and lied/Chose wrong over right/I’ve waited for love on a corner at night/In the dark of a bar/And the strangest of lights/Oh, I have looked, but failed to find.” And yet, this song is ultimately positive. “Because I flirted with death and I came back to life.” The CD then concludes with “You Want It,” a gorgeous song that reminds me of Aimee Mann during the chorus. “You want it/You want it so bad/It’s on the tip of your tongue/And you can taste it/You want it/You want it so close/But still just far enough/You’ve got to chase it.” Jausmė Stonkutė plays kanklės on this track.