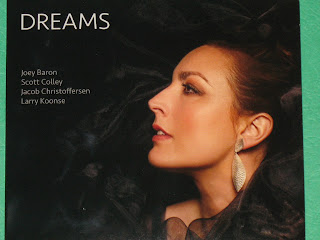 Danish vocalist Sinne Eeg’s new album, Dreams, her follow-up to 2015’s Eeg-Fonnesbaek, was recorded in New York with mostly American musicians. Unlike her previous album, this one features mostly original material, written or co-written by Sinne Eeg, and it shows just how talented a songwriter she is. I was already well aware from that last release of how great a singer she is. Joining her on this album are Jacob Christoffersen on piano, Larry Koonse on guitar, Joey Baron on drums and Scott Colley on bass. Warny Mandrup, Lasse Nilsson and Jenny Nilsson provide backing vocals.

The album opens with an original track, “The Bitter End,” a very cool tune. I was kind of in love with this tune even before Sinne’s vocals began, with that wonderful work on bass and drums. And then when Sinne’s vocals begin, the first line, “I could whisper lots of stupid things,” increased my passion for this song. There’s also a wonderful instrumental section with some delightful work on keys. This is an excellent, positive track from beginning to end. It was written by Sinne Eeg and Søren Sko. “We might stand a chance to make it to the bitter end.” That’s followed by “Head Over High Heels,” and its playful title is matched by a playfulness in Sinne’s vocal line. What is remarkable is how her vocals somehow seem effortless, completely natural, like someone surprised her by handing her a microphone and she just let this song come out. I also love the bass and that wonderful guitar part. “Head Over High Heels” was written by Sinne Eeg and Mads Mathias.

Just as its title promises, “Love Song” is a timeless, gorgeous love song. I’m so glad to know songs like this are still being written. If you are in need of a little romance, playing this song should help you get there. “No matter where the road will lead us/Near or far/I won’t ever let you go.” It features some seriously enjoyable work on guitar. That’s followed by the CD’s first cover, “What Is This Thing Called Love” by Cole Porter, himself a master of the timeless love song. This is an interesting rendition, beginning with vocals and percussion, which will certainly grab your attention, and including some scat. Then, when the rest of the musicians join in, this track features wonderful work on piano and bass. It’s followed by another cover, keeping with the theme of questioning the notion of love, Rodgers and Hart’s “Falling In Love With Love.” Sinne Eeg delivers a pretty rendition, with some light scat.

“Dreams,” the CD’s title track, is likewise a pretty song, with vocals but no lyrics. It does have a pleasant dream-like quality to it, in part because of that lack of lyrics. Sinne’s vocals feel capable of gently and safely carrying you across a glorious landscape. This track, however, is not without a good groove. There is an instrumental section with some strong work on bass and piano, and the song has a beautiful build to it.

The album concludes with two covers, “I’ll Remember April” and “Anything Goes.” There is something kind of fanciful about her take on “I’ll Remember April,” a song written by Gene De Paul, Patricia Johnston and Don Raye. It features a bit of gentle scat. Sinne Eeg does an absolutely wonderful job with Cole Porter’s “Anything Goes,” accompanied only by Jacob Christoffersen on piano. This track is a lot of fun, and is one of my favorites. The song’s original lyrics featured then timely lines, and Sinne Eeg adds some lyrics pertinent to the state of things today: “There was a time when talent mattered/When singers were being flattered on TV shows/Now anything goes/A lie was once a lie, but actual/Fake news are now post-factual, I suppose/Anything goes/The world has gone mad today.” And these: “If people think it’s presidential/To rule thanks to influential Russian foes/Anything goes/I guess just about anything goes these days.” Yes, that is certainly how it feels these days.