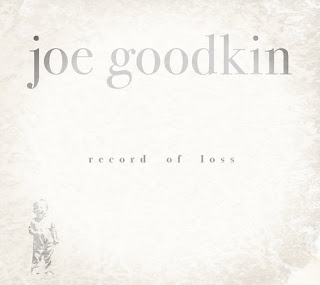 In 2015, Joe Goodkin released his first solo album, an EP titled Record Of Life. He now follows that with Record Of Loss, a six-song EP that had me in tears before its end. I suppose I should admit that I am on the edge of despair these days anyway, what with the daily attacks on all that is good coming from Donald Trump and his regime. But that shouldn’t in any way be a slight on the power of this CD to move us emotionally. As the CD’s title promises, these are songs of loss, songs which I believe will be particularly poignant for most people these days. It feels we’ve all lost something of consequence, doesn’t it? All the songs on this CD were written by Joe Goodkin, and are performed by him on his 1963 Gibson.

He starts the album with “Nothing To Lose,” in which he sings “This is how the cards fell/This is the blues/This is really living with nothing to lose.” His voice is perfect to convey sadness, melancholy, but with love and even a bit of hope. Perhaps I always feel there is hope in honesty, as this song is disarmingly honest. “The pastor said a quiet prayer, and his suffering came to an end.” It’s a song that deals in part with death, an individual death, then ending with the line, “And we all just disappear.” And then in “Never Come Back,” Joe Goodkin sings, “And my dad spoke up/With an edge in his voice/He said you never know when someone might walk out of your life/And never come back/Never come back.” This is one of my personal favorites. There is something beautiful about it. And I also appreciate that even in loss, these are not songs of isolation, but rather work to bring us together. “And I wish had spoken up/And said I love you all/Because you never know when someone might walk out of your life/And never come back.” (Yes, this is one of the songs that make me cry.)

“Charlie And Roger” tells the story of sickness and death of loved ones. It opens with these lines: “My uncle and Charlie moved west so Charlie could die/In a house on a lake with a cat on his lap/He slowly said goodbye.” And those are soon followed by these heartbreaking lines: “I wish I knew him better than I did/The memories I have are mostly of after he got sick.” In a way, I suppose this song is about knowing him better, about learning something about his life by singing about it. The song is about two couples, each suffering a loss like that. That’s followed by “Sarah And Julie,” which is about living with an affliction, and while it is sad, there is a positive bent to the song, an optimism heard in lines like “But she’s going to make the most of her time,” “And each year’s a gift, a mix of work and luck” and “Let us be judged by the love we give.” And check out these lines: “My friend Sarah is living her death/I guess all of us are/But most days we forget.”

In “Eric And Gina,” Joe Goodkin sings of both his wife’s ex and his own, and how they have affected his life and marriage. It’s a powerful and brutally honest song, another of this CD’s best. “And though it tore her heart in half/She was secretly relieved/To be out from his collapse/And the endless tragedy.” And these are perhaps the best lines I’ve heard about divorce: “And so a lifetime worth of plans/Became a year of paperwork.” The CD then concludes with “For The Loss,” a moving and personal account of abortion. “I’m not even sure that it was mine/That somehow makes it worse/I took her to the clinic/And paid the money/I drove her home in tears/So she could get some sleep.”

CD Track List
Record Of Loss is scheduled to be released on February 10, 2017 on Quell Records.
Posted by Michael Doherty at 1:12 PM