As we hold our breath and plunge into 2017, I thought I'd write a bit about my trip east, with the focus being on the music, of course.

On December 28th, I caught the first night of the annual end-of-the-year run by The Mighty Mighty Bosstones. They did a great show at the House of Blues, though at times the dance floor was a little too crowded for my claustrophobic soul. We missed the first band, but caught a fun set by The Skatalites. And then there was a surprise performance by Wreckless Eric (Eric Goulden). He did just one song, "Whole Wide World," but it was a total treat. The Mighty Mighty Bosstones then did a great, energetic set, with hardly a pause between songs. Just one fantastic tune after another. Toward the end of the set, in introducing "Don't Worry Desmond Dekker," the band provided a brief reminder of what is really important. I know I've often lost focus of that in the past month, what with the horror and shame and worry of having Donald Trump as our next president (that still seems like a cruel joke). And then, to really stress the point, the band went straight into a cover of "What The World Needs Now Is Love." As you might guess, they pumped some energy into that song. They followed that with "They Will Need Music." I love that song, and as I've been saying, we will all be needing music the next four years. The show wasn't all that long, but the encore began with a delightful rendition of Vince Guaraldi's "Linus And Lucy," performed on upright piano. 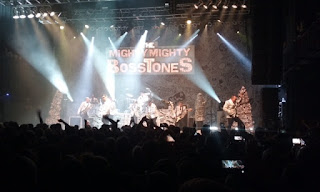 On December 30th, I made it to two concerts. First I saw Ellis Paul at Club Passim, with Christopher Williams doing an opening set. Christopher Williams did five songs, including a new one titled "Do Not Be Afraid," which ended up being my favorite of his set. He then joined Ellis Paul on percussion and backing vocals. Ellis wasn't feeling great, but still put on a really good show, getting lots of support from both his band and the audience, and choosing some interesting covers (including "Hallelujah," which brought tears to my eyes). (You can read my review of Ellis Paul's set here.) And then I went over to Bull McCabe's to see The Be Nice Or Leave Brass Band, one of Josh Lederman's projects. Fortunately, they started a few minutes late, so we didn't miss the beginning of their show. And hey, their opening song featured a sousaphone solo, so there! It was an excellent night of music, and reminded me once again that even in a year as shitty as 2016, and even in a world that would somehow elect Donald Trump as president of the United States, there is still plenty of beauty out there, plenty of good people, plenty to celebrate. Just keep dancing, right?

I also caught Ellis Paul's early New Year's Eve show. Flynn opened for Ellis Paul on New Year's Eve. It's always a treat to catch a set by Flynn, especially as his performances are on the rare side these days. What made this set particularly special was the appearance of some new material. He played two new songs, one of which is among the best songs he's ever written. Seriously. It's titled "Slow Down," and it's a fantastic song. I'm looking forward to his next CD. His son joined him on guitar for a few songs. "This is his first time playing at Passim," Flynn told the crowd. Then Laurie MacAllister joined him on backing vocals for "If She's The One," the final song of his set. Flynn joined Ellis Paul on backing vocals for "3,000 Miles." Ellis Paul's set was basically the same as the night before, but his voice was noticeably stronger. (You can read my review of Ellis Paul's set here.)

I returned to Club Passim again on New Year's Day for a special tribute to Leonard Cohen, featuring several performers covering some of their favorites by the world's greatest songwriter. An old concert poster (with the artwork from the cover of Recent Songs) was hung on the wall at the back of the stage. I wasn't familiar with the majority of artists on the bill, but I love getting turned on to new folks, and there were some people I am eager to hear more from. Especially Molly Pinto Madigan, who opened the show with a good version of "Who By Fire." Her voice is wonderful. I also really enjoyed Amy Kucharik's rendition of "Famous Blue Raincoat," which she played on ukulele. Some of the song choices were surprising. I never expected to hear "The Law," for example. Or "The Traitor," or "Did I Ever Love You." Each performer got to do only one song, so some of Leonard Cohen's most well-known compositions were noticeably absent from the evening. Songs like "Sisters Of Mercy," "I'm Your Man," "Dance Me To The End Of Love" and "Everybody Knows" were left out of the set list. By the way, that version of "The Law" featured an unusual approach. Stash Wyslouch and Sean Trischka delivered a strange, fast version. It was odd, but totally worked. They sang "while you're here on the stand" rather than "while you're still on the stand." There were a couple of other lyric changes in the show. Carl Cacho sang, "You'll be hearing from me, baby, before too long" instead of "You'll be hearing from me, baby, long after I'm gone." And Emy Phelps sang "I hope you know it was never meant for you" rather than "I hope you know it was never to you" in "Bird On The Wire." (Darol Anger played guitar on that song; I think before that I'd only ever seen him play fiddle.) Also, regarding songs that Leonard Cohen changed over the years, this group of artists mostly stuck with the album versions. For example, in "Suzanne," Leonard Cohen changed the line from "Among the garbage and the flowers" to the grammatically correct "Amid the garbage and the flowers," while Dan Hogan delivered the line the original way. (It was also Dan Hogan, by the way, who supplied that great poster adorning the stage.) And "Hallelujah" has certainly gone through several changes over the years, with some verses having been dropped and new verses added. This was the song these artists chose to end the night, and they did it the way it was presented on the Various Positions album, with those original four verses.

Set List
It was an excellent evening. I only wish it had gone on longer.

Posted by Michael Doherty at 12:07 PM