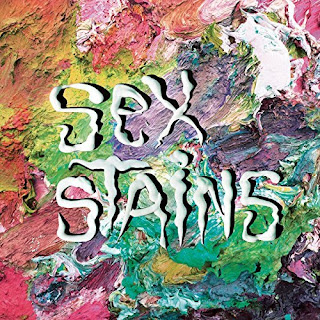 As our nation descends into what promises to be a dark and horrible time, many of our citizens have taken to the streets today to combat the rising tide of terror, and to show a brighter, most positive face to our country. It’s wonderful to see that many, many more people turned out for the women’s marches than did for the inauguration of that narcissistic, racist, misogynist monster. It gives us hope, and we could all use a bit of that right about now, eh? But I’m still furious, and it’s difficult to let go of that anger. So the music for today had to be loud, kind of angry, but with a sense of play (because, hell, I don’t want to descend into my own darkest places). And also, in solidarity with the days’ events, it had to be by women (or at least with female lead vocals). So I’ve been listening to the Sex Stains.

Yes, I know, I know. But don’t let the band’s name scare you away.  Sex Stains are actually a really good band, fronted by Bratmobile’s Allison Wolfe. I saw them in concert in September, on the same bill as The Mekons, and they were a lot of fun, with a great energy (though it was difficult to make out the lyrics). Their self-titled debut CD was released that month, but for some reason I never got around to reviewing it until now. Today seems like the perfect time for the Sex Stains, for their energy.

The CD opens with “Countdown To…,” a not-quite-nostalgic look at a childhood of poverty. Here is a taste of the lyrics: “I don’t remember anything/But Dad kept a loaded gun in the bedside table/When my sister and I were five, Mom came into the bedroom/To find us pointing the gun at each other/Give Mommy the gun.” But the line from this song that always stands out for me is “Music saved me.” I expect it to do the same for all of us. By the way, the sort of spoken-word style of the verses reminds me a bit of some of the work of the Dead Milkmen and King Missile. That’s followed by “Land Of La LA,” one of my favorites, and not just because I live in Los Angeles. This is a seriously fun and catchy tune, with a great groove, but not with innocent or meaningless lyrics. “Welcome here to the land of la la/Happy to serve, don’t quite your day job/Can’t get ahead or off the streets/So who do you know and who do you meet?”

“Period. Period.” is a strange one, mainly because of the way most of the lyrics are delivered. But I totally dig it. It reminds me a bit of The Waitresses. “Could you please leave me alone now?/I didn’t sign up for this shit, wow/You’re not invited tonight – ouch/And oh no, you want to cramp my style/Well, your need for male attention sucks/And no one here really gives a fuck/So why must I spell it out for you?” This is one of the disc’s highlights.

“Oh No (Say What?)” has some lyrics that seem just exactly right for today (not that the song is about Donald Trump): “Hateful. You ain’t grateful/We put your heart to the test/Let’s rearrange that fucking mess/You’re hateful. You ain’t grateful.” “Who Song Love Song” is ridiculously fun. But yes, I admit I am guilty of that sort of thing from time to time. “Oh no! Did you just tell me that’s a Who song?/‘Can’t Explain’ when I was singing you a love song/Why do boys always gotta tell us what is/What I want is you to listen up and shut it/Up to you. It’s what you want and when you want it.”

“Cutie Pie” has something of a reggae vibe, and is another that is making me feel better about the world. “I like you, it’s like a tantrum/But now I don’t like you/Feel free to split like a phantom.” Before the line “Here’s a correspondence,” there is a sound like a chime on the computer that a new message has arrived. The CD then concludes with “Crumbs,” a heavy and wild tune. “I’ll take your crumbs, I’ll beg for your scraps/Tell me when you want me – I’ll take that/Talk like a baby, but it ain’t real/And all of your money, can’t buy you to feel/None of your fame will clear your name.”