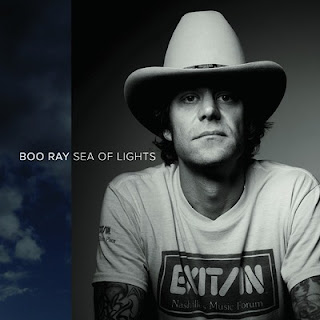 These days I often feel like hiding under the covers in my apartment with just my stereo for company, for the world has gotten positively bizarre, and not bizarre in any kind of delightful or exciting way, but rather in a terrifying, horrid way that makes you question whether reality has permanently shifted from tolerable to shitty. But then I put on the new (well, sort of new) disc from Boo Ray, Sea Of Lights, and its energetic country rock just wouldn’t let me sit still. For one thing, I had to make it to the counter to pour myself a glass of whiskey. The music demanded it, you understand.

Boo Ray is from North Carolina, but spent some time here in Los Angeles, and his time here has informed the music on at least a couple of tracks on this album. Now he’s based in Nashville, a great town with the best pancakes in the nation, and certainly that place has also influenced the music on this CD. And this mix, this combination of influences lends itself to a strange and potent brand of southern rock, with a dash of humor working alongside the sincere, straightforward guitar. And man, the photo on the back of the CD case seems almost too perfect for these strange times, with its image of a red and black U.S. flag on a billboard against a darkening sky. Now isn’t that exactly the right image for these times of Trump and Putin and this fucked up carnival ride they’re determined to strap the world into? And what’s the right music to be played on this ride? Perhaps it would be Alec Baldwin’s proposed rendition of “Highway To Hell.” I’m not sure, but for now I’m definitely digging this Boo Ray disc, and it’s keeping me from taking up permanent residence under my furry blanket.

The album opens with “Redneck Rock & Roll,” which comes on hard and mean and honest. And in this song he tells us he’s looking for just exactly what he’s delivering here, as he sings, “It’s got to be country/It’s got to have soul/Strip it down to the bone/Just give me that redneck rock and roll.” Oh yes. “I can’t stand people talking, not saying a damn thing.” This song was written by Boo Ray and Davy Ulbrich. It’s followed by the album’s title track, “Sea Of Lights,” a song that mentions Los Angeles, where the CD was recorded. “Put me way up on the silver screen/A broken heart and shattered dreams/A sea of lights, a gentle breeze/Take me to Los Angeles.” A good portion of us here in L.A. can relate to this song, no question. It was written by Boo Ray and Noah Shain. Noah Shain also produced this CD. By the way, the musicians backing Boo Ray on this disc include Steve Ferrone on drums, Paul III on bass, Sol Philcox-Littlefield on guitar, Dallas Kruse on keys and Smith Curry on pedal steel.

“Bad News Travels Fast” was the title track of an earlier Boo Ray release, and on this album he revisits the song, this new version having a harder country rock vibe. It sounds more like something you’d hear at a roadside bar than the previous version. “The girls in California just love the way I talk/They drop me off on Sunset, and I’ll take a little walk.” That’s followed by one of my favorite tracks, “A Melody, Some Guitars & A Rhyme” (which also has my favorite song title of the album). It’s a mellower country number about the healing power of music, and it features one of the best vocal performances of the CD. “The sun goes down on me, the day fades away/It breaks my heart every single time/That honky tonk music takes my pain away/With a melody, some guitars and a rhyme.” This one was written by Boo Ray and Travis Porterfield.

“Chickens” is one of only two covers on this album, this one written by Hayes Carll and Ray Wylie Hubbard. Hayes Carll’s studio version begins quietly, then kicks in, whereas this version by Boo Ray starts off with the energy already high. The other cover is “Emmaline,” which was written by Errol Brown and Tony Wilson, and originally recorded by their band Hot Chocolate (it is usually titled “Emma”). This song is an interesting companion to the CD’s title track, about large dreams in Los Angeles, with lines like “Emma was a star in everyone's eyes/And when she said she'd be a movie queen/Nobody laughed” and “I'm gonna write your name high on that silver screen.” Here those dreams go unfulfilled, leading to the woman’s suicide one December night. Perhaps a bit heavy for us these days, but a good song. How long can we go on living on dreams?

“Keep That Hammer Down” is a pounding, thrilling tune that delivers every time I listen to this disc. This is one I’m adding to my road trip play list. Keep moving, keep going, and this song will urge you along, keep you awake as you push on through.